The U.S. economy has been less dynamic in the 21st century, by many measures, than it was in the late 20th century.

Fewer new businesses are starting. Existing businesses have slowed the pace at which they hire new workers (as the chart here shows). Workers are less likely to switch jobs or move to a new city. Companies are investing in new buildings and equipment at a lower rate. And small businesses make up a shrinking share of the economy. 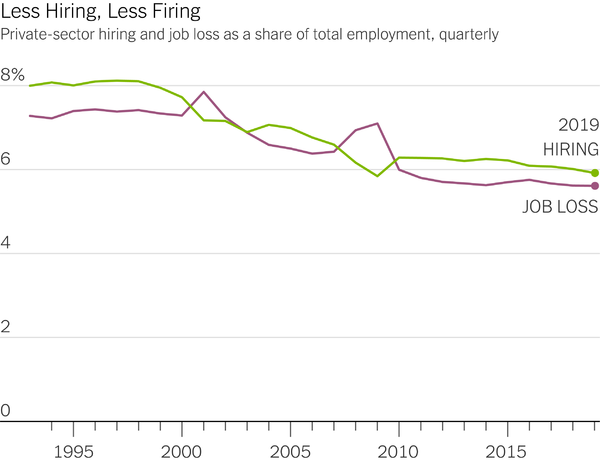 Together, these trends suggest that the economy suffers from a lack of fair competition, many economists believe. Large corporations are often able to increase profits not by providing better products than their rivals but instead by being so big that they exercise power over workers and consumers. The government also plays a role, through policies that protect existing companies at the expense of start-ups and new entrants into an industry.

The technical term for excess profits from a lack of competition is “monopoly rents.” Just think about how frustrated you may have been by the customer service from an airline, cable-television provider or health insurer. And then imagine how frustrating it may be to work there. Despite the problems at these companies, consumers and workers don’t always have good alternatives.

The lack of competitive dynamism plays a role in many of the U.S. economy’s biggest problems: the disappointing economic growth of the past two decades; the declining share of output going to workers; and rising income inequality. It also helps explain the new concern — among both Republicans (like Josh Hawley and Ken Buck) and Democrats (like Elizabeth Warren and Amy Klobuchar) — about the power of big business.

Today, President Biden is issuing an executive order that tries to address the economy’s competition problem. It directs regulators to take specific steps to reduce monopoly rents in multiple industries. Among other things, the order would:

Make it easier for generic-drug makers and Canadian providers to compete with U.S. pharmaceutical companies.

Allow Americans to buy hearing aids without a prescription (a 2017 law — signed by Donald Trump — called for that, but it still has not happened).

Require hospitals to be more transparent about billing (a problem that my colleague Sarah Kliff has documented).

Force airlines to refund money when they lose bags or when the in-flight Wi-Fi doesn’t function.

Make sure that farmers can repair their own equipment or choose who repairs it, rather than allowing manufacturers to dictate who can.

Increase federal scrutiny of tech companies’ mergers and their use of consumer data, as David McCabe and Cecilia Kang of The Times explain.

Restrict “noncompete clauses,” like the ones that restaurant chains and retailers use to keep workers from accepting a job at a rival.

Is the executive order sweeping enough to matter? Probably, although it’s not clear how much.

The problem of monopoly rents has grown so large that even a modest reduction in them could be significant. Thomas Philippon, an N.Y.U. economist, has estimated that the economy’s lack of fair competition costs the typical American household more than $5,000 a year, through both higher prices and lower wages.

The hearing-aid policy alone, for example, could save affected families a few thousand dollars a year. It could also lead to innovation in the industry and help many hearing-impaired Americans who can’t now afford help.

As word began spreading this week that Biden was planning to issue an executive order on competition, analysts across the ideological spectrum praised the idea. Gary Winslett of the conservative-leaning R Street Institute called the moves “terrific.” Zephyr Teachout, the progressive legal scholar, said they were “just huge.”

Jason Furman, a top economic adviser in the Obama administration, told my colleague Neil Irwin: “I don’t think addressing competition issues will miraculously transform inequality in this country, but it will help. The government should be on your side when it comes to wages.”

No doubt, the order will receive more specific criticism once its details are clear, especially from industries that it targets. (There is also no doubt that executives and lobbyists from those industries will claim that the order would actually hurt workers and consumers, but you don’t need to take those claims at face value.)

The more serious question may be how impactful an executive order — as opposed to new legislation — can be. Biden administration officials made sure to write this order narrowly, targeting specific industries, to reduce the chances that business-friendly judges would overturn any federal regulations that stem from the order.

Of course, that also means the order will have only a modest effect on the biggest causes of economic sclerosis and inequality, like corporate consolidation and workers’ lack of bargaining power.

Still, Biden’s advisers argue that the order is a first step toward getting the federal government to care about competition again. “A lot of this is getting back into the American antitrust tradition that was created by the Roosevelts — T.R. and F.D.R.,” Bharat Ramamurti, a Biden adviser who previously worked for Warren, told me. “Highly concentrated industries are fundamentally in tension with American capitalism.”

The Haitian authorities arrested at least 17 people, including two American citizens and 15 Colombians, in connection with the assassination of President Jovenel Moïse.

Two competing prime ministers — one of whom Moïse appointed days before his death — are claiming to be in charge.

With cases rising in Tokyo, Olympic organizers said they would not allow spectators at most events.

Pfizer says it is developing a version of its Covid vaccine against the Delta variant.

The U.S. is still closed to European travelers. It’s unclear when that’ll change.

Biden said the Taliban’s recent surge in Afghanistan would not change his decision to withdraw U.S. troops.

Toyota, a major donor to Republicans, says it will stop giving to those who disputed the 2020 presidential vote.

The F.D.A. narrowed its recommendation of a new Alzheimer’s drug, saying only patients with mild memory loss should receive it.

California is bracing for another heat wave. And across the country, nights are warming faster than days. Here’s why that matters.

Despite 42 points from the Milwaukee Bucks’ Giannis Antetokounmpo, the Phoenix Suns won Game 2 of the N.B.A. Finals. The Suns lead the series 2-0.

It’s illegal for children in China to play video games after 10 p.m. Facial-recognition software aims to enforce that rule.

Tracy Kennard on having a second scoop of ramen noodles and how cancer changed her relationship to food.

Democrats should propose a new crime bill — one that focuses on underlying causes rather than harsh penalties, Slate’s Jordan Weissmann argues.

A stiff drink: The women left out of the history of cocktails.

Modern Love: They broke up. He couldn’t remember.

A Times classic: Could you pass the citizenship test?

Lives Lived: Dicky Maegle was a Pro Bowl defensive back. But he may be best remembered for getting tackled by an opposing player who ran off the bench. Maegle died at 86.

A record year for America’s parks

Dreaming of a trip to a national park? You’d better plan ahead: Americans are flocking to the parks in record numbers, leading to long lines and congested facilities. The Times sent photographers to four parks over the Fourth of July weekend to capture the sights.

At Acadia National Park, in Maine, Cadillac Mountain is an idyllic perch from which to watch the sunrise. To reduce overcrowding and protect the area, the park set up a reservation system for all vehicles heading to the summit.

In California’s Joshua Tree National Park, visitors spilled beyond the walkway to take in the breathtaking views. At Yellowstone, people crowded boardwalks as they awaited the eruption of Old Faithful, one of the park’s biggest draws. See photos of the parks. — Sanam Yar, a Morning writer

This peach-filled dessert is a lush combination of a Southern upside-down cake and a French tarte tatin.

In the mood for a blockbuster? There’s “Black Widow,” the latest entry in the Marvel Cinematic Universe.

What to Listen To

See how you do compared with other Times readers in this week’s News Quiz.

The pangram from yesterday’s Spelling Bee was cordial. Here is today’s puzzle — or you can play online.

The average score so far in The Times’s 15-question spelling quiz is 8.5. Can you do better?

Thanks for spending part of your morning with The Times. See you Monday. — David

“The Daily” is about Haiti. “The Ezra Klein Show” features the sociologist and writer Eve Ewing.