FRANKFURT (Reuters) – Investors on Friday expressed concerns over whether Thyssenkrupp (TKAG.DE) can come up with a working strategy for its struggling businesses following the sale of its most profitable division, elevators, for 17.2 billion euros ($18.69 billion). 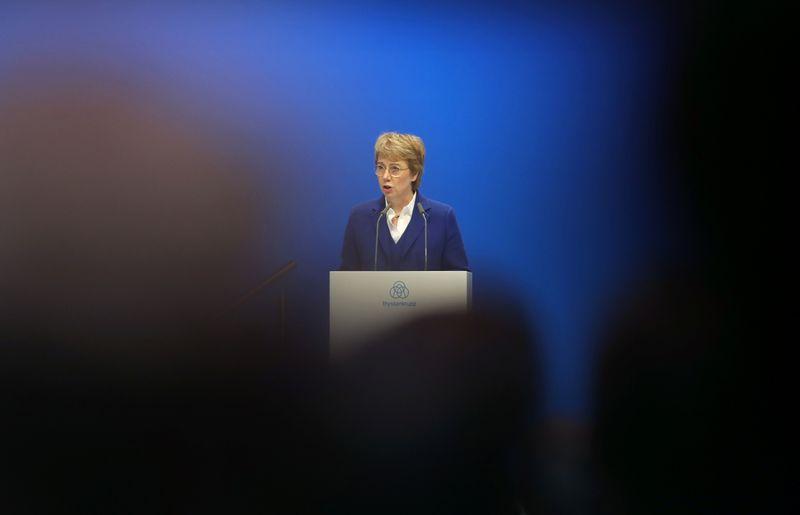 The landmark sale, announced a day earlier, will leave the stricken conglomerate with a bunch of underperforming or loss-making businesses in need of restructuring, including plant building, car parts, steel, submarines and materials trading.

“What is needed is a very granular plan to make sure progress can be measured. Every day that goes by without it is a lost day.”

Thyssenkrupp CEO Martina Merz confirmed plans to set out in May how funds from the elevator sale will be used, apart from cutting debt and pension liabilities, which jointly stand at around 16 billion euros.

“We do not like selling this division. But it is the best solution,” Merz said, declining to answer which businesses will remain a core part of the conglomerate.

Thyssenkrupp late on Thursday agreed to sell its elevators division to a consortium of Advent, Cinven and Germany’s RAG foundation, divesting its most profitable business.

Shares initially rose as much as 4% on the deal, but then fell by more than 7% along with other stocks over concerns related to the spread of the coronavirus as well as uncertainty over the company’s future.

“It is far from secure that high investments into the reorganisation of Steel Europe and the remaining business areas will be successful,” Baader Bank analyst Christian Obst said in a note.

Without its elevator division, which is the world’s fourth-largest lift maker, Thyssenkrupp would have made an adjusted operating loss of 105 million euros last year, as opposed to a profit of 802 million.

“The problems are anything but solved by the deal,” a trader said.