A Halloween postcard sent in 1920 was finally delivered to the right Michigan address this week, nearly 100 years late.

The unexpected letter from the past arrived in a woman’s mailbox on Tuesday, leaving her confused and curious about it’s likely long-dead author.

“It was sitting right on top of the mail,” said Brittany Keech, of Belding, Mich. “I start looking at it and I’m like, ‘OK, it’s been through some wear and tear,’” she told local station WXYZ.

Keech examined the weathered old postcard in detail and shared photos of it on Facebook, in hopes of perhaps identifying whoever wrote or sent it.

The card had a one-cent stamp of George Washington affixed to it, and a postmark dated Oct. 29, 1920. The front of the card featured a Halloween theme.

“It shows a witch with a cat and a goose and an owl,” Keech told WXYZ.

“Halloween greeting,” the cover of the card reads. “’Witch’ would you rather be? A goose or a pumpkin head?” 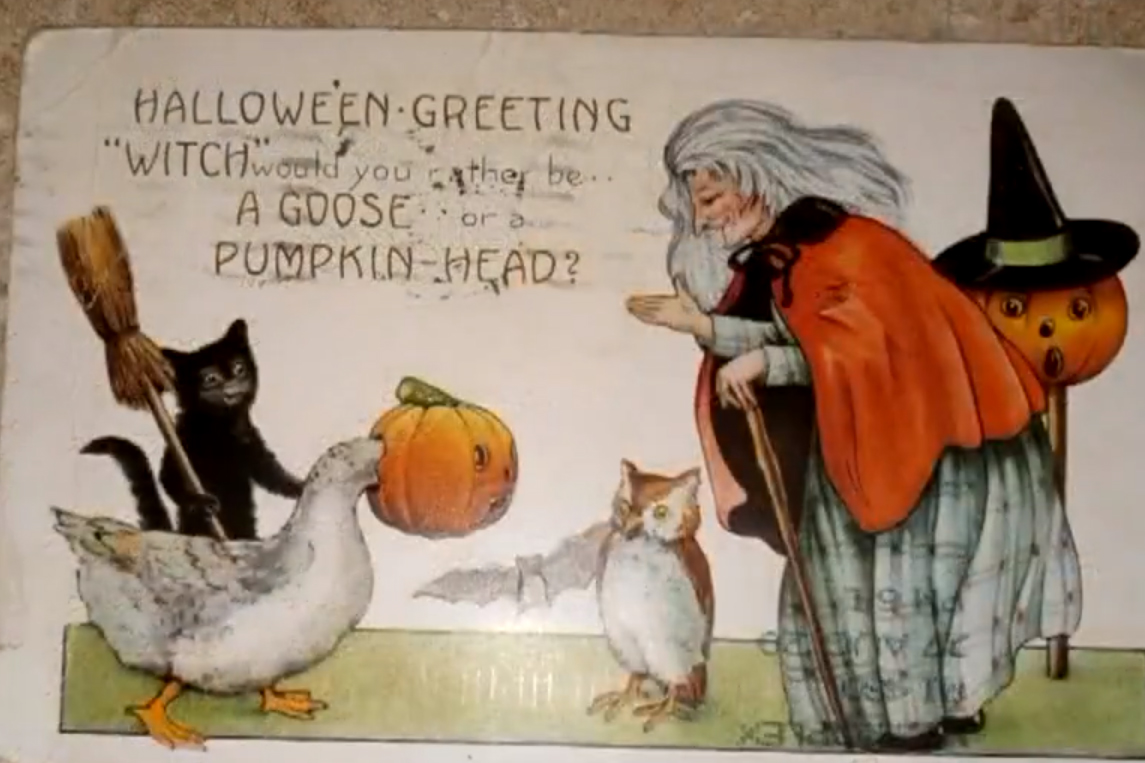 Keech says the letter was handwritten by a woman named Flossie Burgess, although the name is hard to make out. Flossie appeared to run out of space toward the end of her letter, and the handwriting gets increasingly smaller toward the bottom of the card.

It was addressed to Roy McQueen, whom Burgess describes as a “cousin” in the letter.

McQueen appeared to be having an issue with his pants, according to the letter.

Hope this will find you all well. We are quite well, but Mother has awful lame knees. It is awful cold here. I just finished my history lesson and am going to bed pretty soon. My father is shaving and my mother is telling me your address. I will have to close for a night. Hope grandma and grandpa are well. Don’t forget to write us — Roy get his pants fixed yet.

Keech says she’s trying to track down McQueen’s descendants in hopes of delivering the letter into the rightful hands.

“I’m hoping I can find a relative that’s still alive to get this to them so that they have this to cherish,” she told local station Wood TV.

Keech suspects the letter might have been lost and found in the mail.

However, a spokesperson for the U.S. Postal Service (USPS) says that likely was not the case.

“In most cases these incidents do not involve mail that had been lost in our network and later found,” the USPS told WXYZ in a statement.

“What we typically find is that old letters and postcards – sometimes purchased at flea markets, antique shops and even online – are re-entered into our system. The end result is what we do best – as long as there is a deliverable address and postage, the card or letter gets delivered.”

In other words, the USPS is going to mark this story as a win.

Keech has been posting updates about her search on the Belding community Facebook page.

Her latest update on Friday suggests she may have found one of McQueen’s family members.

That means she might soon have an answer to the 100-year-old letter’s greatest cliffhanger: Did Roy get his pants fixed?