Early this month, a group of Democratic members of Congress introduced an Abolition Amendment to the U.S. Constitution. Why, in the year 2020, does the Constitution need an amendment dealing with the abolition of slavery? Wasn’t that accomplished over a century and a half ago?

The problem is that the Thirteenth Amendment, ratified in 1865, which prohibits slavery throughout the country, allows for “involuntary servitude” as a “punishment for crime.” This loophole made possible the establishment of a giant, extremely profitable, system of convict labor, mainly affecting African-Americans, in the Jim Crow South. That system no longer exists but its legacy remains in the widespread forced labor of prisoners, who are paid far below the minimum wage. The Abolition Amendment would eliminate the Thirteenth Amendment’s “criminal exemption” by adding these words to the Constitution: “Neither slavery nor involuntary servitude may be imposed as a punishment for a crime.”

When enacted, the Thirteenth Amendment was recognized as a turning point in the history of the United States, indeed the entire world. When the House of Representatives approved it as the Civil War drew to a close, wild scenes of celebration followed. Members threw their hats in the air and embraced one another. Passage, wrote one newspaper, was “the crowning event of the war, indeed of the century.”

The Amendment’s wording, including the criminal exemption, was based on Thomas Jefferson’s proposed but never enacted Land Ordinance of 1784, which would have barred slavery in all the new nation’s territories. From there, it migrated to the Northwest Ordinance of 1787, which prohibited slavery in territories north of the Ohio River. Scholars have not explained why Jefferson devised this language. Perhaps he thought that labor was good for the character and would aid in the rehabilitation of prisoners. But the coupling of a ban on slavery with an exemption for convicted criminals quickly became embedded in American law. By the time of the Civil War, it could be found in the constitutions of a large majority of the free states. Such language survives in nearly half the state constitutions.

During the 1850s, Republicans, including Abraham Lincoln, popularized the claim that the Northwest Ordinance demonstrated that their new party was following the intentions of the founding fathers when it sought to bar slavery from the western territories. When it came time during the Civil War to write an amendment abolishing slavery, Charles Sumner, the abolitionist Senator from Massachusetts, proposed wording based on the 1791 French Declaration of the Rights of Man and the Citizen. His colleague Jacob Howard of Michigan rejected the idea of using a French model. “Good old Anglo-Saxon language” was adequate, he declared, and Congress gravitated to the wording of Jefferson’s ordinance.

Because of its very familiarity, the text of the Thirteenth Amendment did not undergo necessary scrutiny. The criminal exemption was almost never mentioned in congressional debates, contemporary newspapers or at antislavery conventions that endorsed the proposed amendment.

But the clause did not go unnoticed by white Southerners. The all-white governments established in the South by President Andrew Johnson after the war’s end enacted laws known as the Black Codes, which sought to use the courts to consign African-Americans to involuntary labor. Black Americans who failed to sign a contract to work for a white employer could be convicted of vagrancy, fined and, if unable to pay, sold at public auction.

“Cunning rebels,” one congressman complained in 1866, were using “the exceptional clause” to reduce freed persons to slavery. In 1867, the National Anti-Slavery Standard, an abolitionist journal published in New York City, called for the passage of a new amendment eliminating the words “except as a punishment for crime.” Today’s abolition amendment seeks to accomplish the same result by other means.

Also in 1867, a Republican congressman from Iowa, John A. Kasson, introduced a resolution clarifying the “true intent” of the 13th Amendment. It was not meant, he insisted, to authorize the “sale or other disposition” of people convicted of crime. If prisoners were required to labor, this should be under the supervision of public authorities, not private individuals or companies. The resolution passed the House, but did not come to a vote in the Senate.

By this time, Congress had enacted, over Johnson’s veto, the Civil Rights Act of 1866, which mandated racial equality in judicial punishments, and had approved the 14th Amendment, requiring states to provide to all people the “equal protection of the laws.” These, senators thought, would prevent the use of the courts to victimize African-Americans, rendering Kasson’s resolution unnecessary. Time would prove them tragically wrong.

During Radical Reconstruction, when hundreds of thousands of African-Americans voted for the first time and large numbers held public office, racial bias in the criminal justice system and the forced labor of those convicted of crime remained minor problems. There were hardly any prisons or prisoners in the South. But with the overthrow of Reconstruction and the imposition of the comprehensive system of white supremacy known as Jim Crow, the prison population expanded rapidly.

Southern states filled their jails with African-Americans, often former slaves convicted of minor crimes. They then rented them out as labor for the owners of railroads, plantations and factories, or required them to work on chain gangs building roads and other public projects, or inside prison walls for private businesses.

The labor of prisoners became a significant source of revenue for Southern states. The system also took hold, but in a much smaller way, in the North.

Without violating the 13th Amendment, Republicans in post-Reconstruction Texas complained, “the courts of law are employed to re-enslave the colored race.” Plantations, they added, “are worked, as of old, by slaves, under the name of convicts.”

Conditions were barbarous and the supply of convicts seemingly endless. “One dies, get another,” became a popular refrain among those who profited from the labor of prisoners. 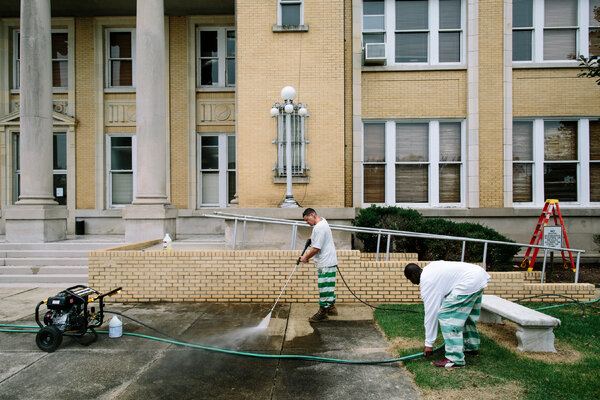 To this day, many convicts are required to work while incarcerated. As janitors, plumbers and the like they help make prisons function. They produce goods like furniture for government offices. This year, prisoners have been making hand sanitizer to help combat the pandemic and fighting California wildfires.

With the expansion of private prisons, more and more inmates work for private contractors, sometimes in factory settings within prison walls. In recent years, many companies have used or benefited from the labor of prisoners.

As late as the 1980s, the Department of Justice concluded that the 13th Amendment attaches “some of the characteristics of slavery” to prisoners, including exemption from minimum-wage laws. Indeed, courts have ruled that inmates working in prisons have no constitutional right to payment at all.

A few years ago, the documentary film “13th” linked the origin of today’s racially biased mass incarceration to the criminal exemption clause. But the members of Congress who voted on the 13th Amendment did not anticipate the later emergence of a new system of involuntary servitude in the South.

We hear a great deal in judicial circles about the “original intent” or “original meaning” of constitutional provisions. But the 13th Amendment shows that unanticipated consequences can be as significant as intended ones. The amendment, which destroyed the largest slave system the modern world has known, was deservedly an occasion for celebration. Especially given our heightened awareness of the inequities of our criminal justice system, it is high time the criminal exemption was eliminated, as the abolition amendment proposes.

Like any change in the Constitution, the abolition amendment would need the approval of two-thirds of Congress and three-quarters of the states, a daunting requirement. It is certain to encounter resistance from those who profit from prison labor, now a multibillion-dollar industry, as well as those who deem unpaid labor a just punishment.

But approval would recognize the basic human rights of those convicted of crime. Reinforcing the idea that all people who work should be paid for their labor, it would be a major step in bringing to fruition the “new birth of freedom” promised by the Civil War.

Eric Foner is an emeritus professor of history at Columbia and the author, most recently, of “The Second Founding: How the Civil War and Reconstruction Remade the Constitution.”