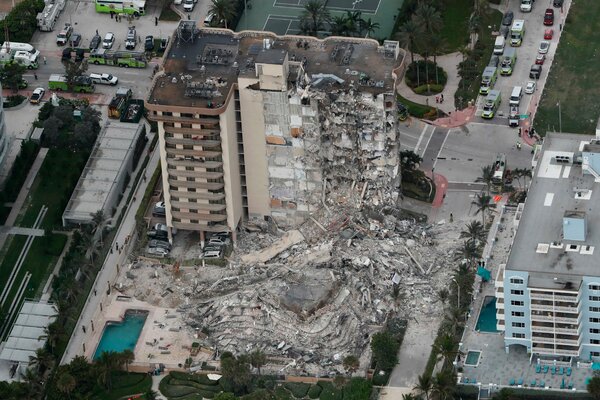 Re “Rubble Searched for Signs of Life” (front page, June 25):

In 1977 a well-known Florida author, John D. MacDonald, published a novel titled “Condominium.” It centered on the shoddy and dangerous building practices for condos along the Florida coast. The collapse of a condo cost lives and wreaked havoc on those who survived.

I’ve heard that the book caused the Florida authorities to take a long look at building codes in the state. The collapse of a condo in Surfside early Thursday may turn out to have been caused by improper building practices, but it is too early to say that. However, it may be time to take a look at condos in Florida to see how they are faring given the impact of the state’s weather on them, and to confirm that proper building practices were followed.

Cal Branche
Hudson, Fla.
The writer has a website about John D. MacDonald and was the chair of two conferences on the author. He is a co-editor of the forthcoming book “The World War Two Letters of John D. and Dorothy MacDonald.”

The collapse of the condo tower just north of Miami Beach is truly tragic, and my heart goes out to all those affected by this catastrophe.

Sadly, this is also a none-too-gentle reminder to those among us who wish and vote for less government involvement in our lives that first responders, building codes, medical care and a regulated insurance industry are all part of that same despised government.

Online vs. In-Person Schooling in the Pandemic

Re “Why Online Schooling Should End,” by Lelac Almagor (Opinion guest essay, June 17):

I would like to offer up an alternate perspective. As a visual arts teacher at a public high school, I found that this year tested our resilience and creativity like no other. While the toll of the pandemic on our students’ lives has been tragic, in terms of social isolation, mental health and learning loss, I would like to focus on the silver lining.

As teachers, we quickly had to move our instruction online and find ways to innovate, collaborate and develop new ways to reach students. My students rose to this challenge, and we made the most of our daily Zoom meetings.

I gave demonstrations on camera and using the “share screen” feature, and students shared their daily progress and provided peer feedback on our virtual classroom. We engaged in rich discussions in breakout rooms and made drawings, paintings, sculptures and digital designs. We produced videos of student work, and students had their work featured in virtual exhibitions.

While this year had its many challenges and was imperfect in many ways, it was a year I will reflect upon proudly.

Lelac Almagor pointed out the inequities in our public education system. These inequities were, in her view, laid bare for all to see in the hodgepodge responses that school systems around the country were forced to enact, on the fly, in those early days of the pandemic. She hopes that ending online schools means “renewing our collective commitment to true public education.”

Ms. Almagor is in her 18th year as a classroom teacher. I am in my 30th. What we witnessed in the past 15 months was not a sudden abandonment of our collective commitment to true public education. It was the culmination of a decades-long antipathy toward the idea of public education as something worthy of our time, treasure and talent.

For many, the benefits of public education to society as a whole, or to themselves in particular, are vague at best, or at worst disputed, denigrated and actively attacked. The fact that the teaching profession is not compensated commensurately with others that require the same (or lower) levels of education and experience is just the tip of the iceberg.

Re “Hero or ‘Charlatan’? An Economist’s Push for In-Person School” (news article, June 23):

Emily Oster seems to revel in being “out of my lane” when it comes to giving pandemic advice to the parents of school-age children. There is no reason an economics professor at Brown University can’t have thoughtful opinions about infectious diseases. Or a biology professor have a viewpoint about the war in Yemen.

One can wonder, though, how Dr. Oster would react to a thoughtful worker on the Brown campus being likewise out of their lane and weighing in on tenure decisions or Ph.D. dissertations.

Biden Should Appoint a Jan. 6 Commission

President Biden has said he would not appoint a presidential commission to investigate Jan. 6. He must reconsider. And Speaker Nancy Pelosi’s select committee should not go forward; a Democratic-controlled select committee opens the country to endless wrangling and Republican disbelief.

South Africa’s Truth and Reconciliation Commission is a perfect example for President Biden to follow. The commission was created to investigate and hold hearings about state and private abuses during the apartheid era.

President Nelson Mandela appointed all the members of the commission, which was chaired by Bishop Desmond Tutu and included other prominent people. The commission held public hearings around the country, many of them televised.

The hour is late. American democracy is at stake.

In his final regular column, Frank Bruni expresses admirable humility regarding his occasional crawl in the “snide tide,” but he’s too hard on himself. During his 10 years as a Times columnist, he did a lot of things right. One could never say he lacked all conviction, for he always spoke with passionate intensity.

His mea culpas stem from our present moment, when toxic vitriol too often lays waste to our public discourse, but the fact that Mr. Bruni refused to serve up a pallid gruel of false equivalencies most often clarified the issues for this reader.

Rather than assuming the role of the omniscient observer looking down from his high perch above the fray, he was always looking from the ground up — informed by the real-world plight and inner strivings of the marginalized and the voiceless, always challenging us to be better, to be more kind, to be more fully human.

A laudable legacy to leave behind.

I am a veterinarian, and I love my job, but looking at our profession as a model of work-life balance is the wrong take.

Studies have found that female veterinarians are 2.4 times as likely to commit suicide as the general population. Veterinarians often carry student loans in the six figures and make a minuscule salary in comparison with other doctors with similar student loans.

This means that even though lighter schedules exist in part-time or relief veterinary work, most of us need to work longer and irregular hours just so we can get by.

We do this job because we are driven to help our animal patients and their human owners. We don’t do it for the money or the quality of life.