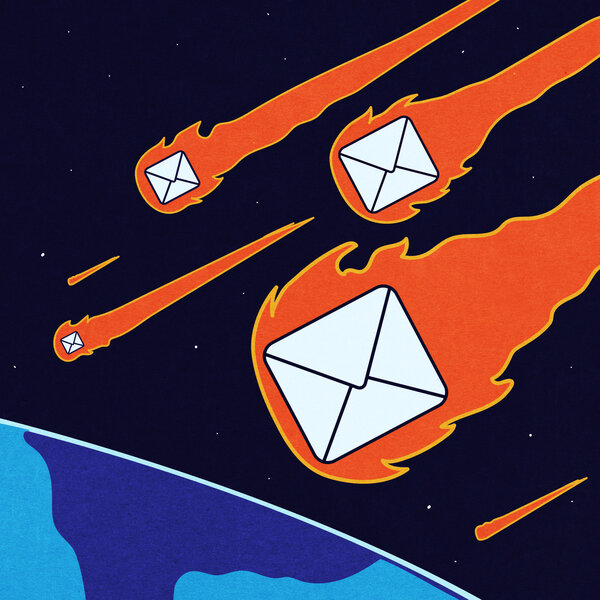 Re “Fed Up With Democratic Emails? You’re Not the Only One,” by Lara Putnam and Micah L. Sifry (Opinion guest essay, nytimes.com, Aug. 1):

The on-the-ground organizing the writers favor is admirable. But in deriding letters to voters, they are far off the mark. The science is clear: Large-scale randomized controlled trials over multiple election cycles have shown that Vote Forward’s partially handwritten letters significantly boost voter turnout.

A peer-reviewed research study of our 2020 program “The Big Send” found that it was among the highest impact voter turnout programs ever measured in a presidential election. Vote Forward rigorously vets volunteers and encourages personal, heartfelt messages that reach beyond their bubbles — an authentic approach that works.

Letter writing is a scalable, accessible activity doable year round from anywhere. It is an enjoyable entry point to electoral activism for many volunteers who later engage in deeper community organizing. And letters can be stockpiled to send at the optimal time, leaving space for other voter contact activities like canvassing and phone banking.

Letters to voters are the kind of thoughtful, sustainable approach to volunteer engagement in elections that should be encouraged if we hope to build a strong civic fabric.

Scott Forman
Oakland, Calif.
The writer is the founder and executive director of Vote Forward, a nonprofit that encourages citizens to vote.

Lara Putnam and Micah L. Sifry nailed it in their guest essay on the serious shortcomings of Democratic Party reliance on “churn and burn” email fund-raising with apocalyptic messaging. My inbox has been swamped this year with emails from Democratic PACs and candidates around the country desperately begging for money to salvage the party’s chances in the coming election. Nancy Pelosi was sending me more than an email a day, many of which had that dispiriting tone.

On May 19, I finally unsubscribed to her Nancy Pelosi for Congress PAC, and sent her an email setting forth my reasons: Too much hyperbole (for example, “I critically need 3,372 gifts before midnight” was a constant refrain; there didn’t seem to be a midnight that went by that wasn’t a crucial financing deadline); too much emotion (she was shocked, disgusted, devastated); and, most troubling, too desperate.

As I explained in my email, that sense of desperation “signals likely failure and has discouraged me from devoting my time and financial resources in the Democratic midterm election effort.”

By contrast, the fund-raising emails I have received from President Biden have been more upbeat, and I have responded by making contributions to the Democratic National Committee. Democrats need to shift quickly from their current desperation-tinged tone to a more confident approach, with emphasis on the president’s and the party’s positive accomplishments.

The grass isn’t any greener on the other side of the aisle. My spam folder is full of similarly apocalyptic visions of what the “Biden/Pelosi/Schumer” troika will inflict on America should Republicans not sweep to congressional power in November. It’s easy enough to just hit “delete.”

What is more concerning (for both red and blue voters) is that none of these desperate and destructive pleas are for anything other than money. No information on how to get more involved in the process. No links to more dispassionate discussions of the issues. Just unwarranted demonization of some of our fellow citizens via bolded adjectives and lots of exclamation marks. We can do better.

Buried in the unfortunate tone of the guest essay are many points that we can agree on. Locally led conversations about elections are extremely powerful and strengthen our democracy. It is, however, a false dichotomy to say we must choose between these important local efforts and the participation of other activists in remote voter mobilization techniques. We can and must do both.

Lara Putnam and Micah L. Sifry cherry-pick a study reporting a negative impact of sending postcards to voters. However, many more studies show a positive impact of between 0.4 and 2 percent. While these are small impacts, they are sufficient to make a difference in close elections.

Campaigns generally do not have the capacity to knock on every door, especially in rural areas. Not all voters will be home when a canvasser shows up, and not all will answer a phone call. An all-of-the-above approach helps ensure that as many people as possible participate in our democracy.

Republican Outrage Over the Raid at Mar-a-Lago

Surely if former President Barack Obama had left the White House and taken with him government documents, some of which may have been classified and all of which should have been delivered to the National Archives, the Republicans would have raised holy hell. But, of course, when a Republican former president does the same they sing a different tune.

As that former president often says, “so sad.”

Republican politicians and Fox News are outraged over the Justice Department raid of Donald Trump’s home and are demanding that the department explain why it did this. What they fail to mention is that Mr. Trump received a copy of the search warrant and an inventory of what was taken. If this was an outrageous intrusion, Mr. Trump could disclose the purpose of the search warrant and what was taken.

Mr. Trump has already turned over 15 boxes that were wrongfully removed from the White House, implicitly indicating that this was all he originally removed. If the dozen or so boxes that were seized on Monday should have been turned over earlier, this is a clear indication that Mr. Trump knowingly broke the law.

Charles W. Murdock
Chicago
The writer is a professor at Loyola University Chicago School of Law.

As a longtime Newtown resident and the husband of a retired Sandy Hook Elementary School teacher, I followed the defamation suit against Alex Jones closely. I largely agree with the sentiments expressed in “Jones Got His Comeuppance, but Don’t Expect an End to the Lies” (front page, Aug. 7).

Throughout history, groups have proved their allegiance to a political/cultural movement by adhering to bizarre and clearly false claims of their leaders. Blood libels. AIDS as a bioweapon. Pizzagate.

Individuals adhering to the ideology of a political/cultural/fringe group will knowingly embrace outright falsehoods to further prove their allegiance. The wilder the conspiracy, the greater the sense of belonging. Willful ignorance: the team jersey of today.