In the early hours of April 10, 2003, I had taken refuge in what was — for me — the safest place in the world: the floor of my parents’ bedroom in our home in Mosul, Iraq.

Less than 24 hours earlier, the Iraqi regime had collapsed in the wake of America’s “shock and awe” campaign. We had watched in disbelief as U.S. forces helped bring down that famous statue in Baghdad’s Firdos square. The prior few weeks had been a mixture of airstrikes and fear.

In Mosul, it was chaos. Army and police forces had fled their posts to provide, I assumed, some protection for their own families. I slept for a few hours before my aunt frantically called to warn us of the widespread looting unfolding at our doorstep. As the day proceeded, men in our neighborhood stood guard at their homes, watching as looters rampaged through nearly every public facility, including hospitals, universities and banks. It was the same scene across the country.

I still remember what Donald Rumsfeld, then the U.S. secretary of defense, said a day later during a news conference when he was asked why U.S. troops did nothing to stop the looting: “Free people are free to make mistakes and commit crimes and do bad things. They’re also free to live their lives and do wonderful things.”

Mr. Rumsfeld, who died on Tuesday, described chaos and disorder as freedom. His comments were a sign of Iraq’s trajectory, and it was, for me, my first brush with what I would come to know as Mr. Rumsfeld’s (and the United States’) modus operandi regarding Iraq — the blatant gaslighting and indifference to the reality on the ground, symbolized in the occupying army’s failure to protect the fragile country it had just taken over. 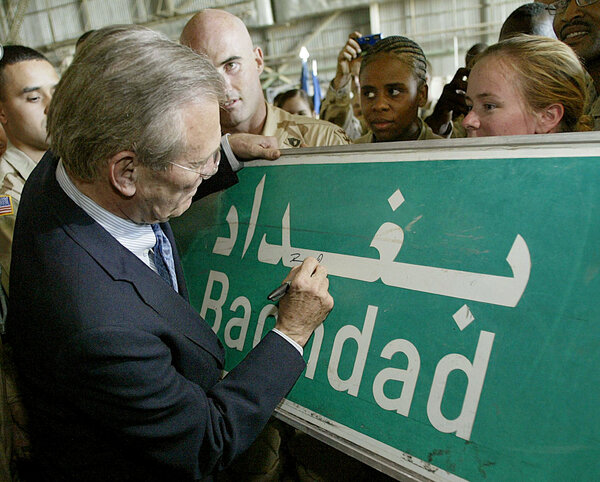 The invasion of Iraq in all its sloppiness and dishonesty has never been a black-and-white event for me; it is a personal conflict I have yet to reconcile. Saddam Hussein was a brutal dictator unlikely to have been ousted by a grass-roots revolution. He probably would have ruled until his death, the mantle passing to his sons. As the mass graves of Kurds and Shiite Iraqis were dug up, his toppling seemed more legitimate. The grievances caused by Mr. Hussein were plenty in Mosul, but the tragic stories of injustices failed in comparison with the carnage wrought by his regime in other parts of the country. The war had brought justice to millions, but millions more would become new victims. They just didn’t know it yet.

The George W. Bush administration didn’t have to look for too long to find Iraqi allies to support the invasion. There were some Iraqis abroad willing to lie and deceive about the existence of weapons of mass destruction for the war to happen. They shared a common end goal with Mr. Rumsfeld: invading Iraq and toppling Mr. Hussein. Everything else was irrelevant.

Mr. Rumsfeld’s track record in Iraq is a litany of failures: advocating the invasion based on easily debunked evidence, overseeing a drawn-out war in which tens of thousands of Iraqis died, endorsing harsh interrogation techniques — all of which accelerated Iraq’s fall into the abyss. His failure to predict that an insurgency opposing the occupation would arise reflects a lack of understanding of war itself. (By that point, he had been secretary of defense twice!)

Perhaps his most inhumane failure of responsibility and moral leadership was the torture of prisoners at Abu Ghraib by U.S. military members. Though some soldiers did time behind bars, Mr. Rumsfeld walked away unscathed. Whatever he believed he had accomplished in Iraq fell apart, and he never apologized nor appeared slightly remorseful over the agony his mistakes caused. The nation of Iraq was invisible to Mr. Rumsfeld, therefore it was unworthy of restoring. As my country shed rivers of blood, he showed no contrition.

Iraq today is a shell of a country, a state on paper only. Democracy is a political game of musical chairs between the same corrupt parties that distribute power and wealth among themselves. Iran is the kingmaker with its armed proxies maintaining the status quo and killing off — literally — any challenges to its status. Ironically, the leaders of these proxy militias were only able to return to Iraq from exile because of America’s toppling of Mr. Hussein. Those same proxies are today sworn enemies of the United States, attacking the U.S. Embassy compound and the remaining few American military bases there to counter the ISIS coalition.

The failure to stabilize Iraq while losing thousands of American lives shifted the U.S. domestic discourse forever. Any type of U.S. intervention, even when nonmilitary and necessary, is met with skepticism. Today, the Middle East still finds itself in the grip of many dictators and war criminals.

After Mr. Rumsfeld left office in 2006, I never really thought of him again. I wasn’t interested in what he said or did. The damage had already been done. To the extent that he set Iraq on an irreversible course of destruction, he won’t be forgotten. But for many of us still hoping for a better Iraq, he is irrelevant. Just as his death is now.

Ms. Al Aqeedi (@RashaAlAqeedi) is the head of the Nonstate Actors program at the Washington-based Newlines Institute. Her commentary focuses on armed groups, radicalization, Middle Eastern geopolitics, and contemporary Iraqi politics and society. She is a native of Mosul, Iraq.