When I founded Michael Angelo’s Wonderland Beauty Parlor in the meatpacking district 15 years ago, I never imagined I would one day have to downsize and relocate to survive rising rents, only to have to then shut down for months. Nor could I conceive of having to choose between paying the rent on my apartment, paying the lease on the salon or putting food on the table.

But at the peak of the summer, my partner and I were presented with a letter from our landlord demanding we pay months of back rent — the four months when my business was closed — or vacate our home in the neighborhood where I’ve lived and worked for two decades.

As Diana Vreeland said, “There’s only one very good life, and that’s the life you know you want, and you make it yourself.” My life is in New York. So after months of patience, I finally received enough unemployment to move into a more affordable apartment. The rent, the lease and dinner are finally paid. For now.

But where is everybody else?

Retail chains are abandoning Manhattan. They claim it is “unsustainable” for them to continue to do business in a city besieged by a pandemic, and that “there’s no reason to do business in New York.” So off they go, the Pain Quotidiens, the Victoria’s Secrets, Neiman Marcus, either jettisoning locations, or packing up shop entirely and running for the hills — which, in the case of the proprietor of Bryant Park Grill, means Florida.

I have a heartfelt farewell for them that can be summed up in two words, better left said by a cabdriver with their fist on the horn in what used to be Midtown traffic.

I’ve lived and worked in and around this city my entire life, just like my father, grandfather and great-grandfather before me: four generations dating back to the late 1800s. 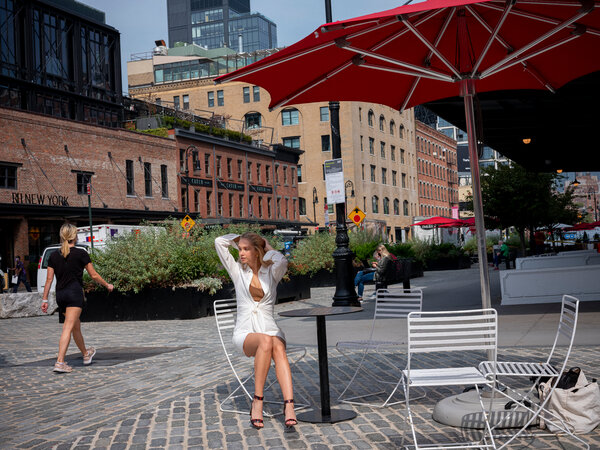 It’s where I learned my trade, developed my artistic aesthetic, fell in love and sustained a career, now for over 25 years. I love New York. That simple declaration is inseparable from the fact that I made my life here. And this is true for so many of the city’s small-business owners, who invest in the communities where they operate rather than fleeing them.

Big brands were abandoning the Big Apple even before the pandemic. According to a study by the Center for an Urban Future, 2019 had the largest drop in national retail locations in the city since the organization began its tracking over a decade ago. The number of chain stores shrank by 3.7 percent last year, a huge increase from the 0.3 percent decline in 2018, the first year the center clocked negative growth.

Pre-pandemic, retailers — both big and small — were already struggling to compete with the convenience and ubiquity of online shopping. Now here we are, six months into a pandemic that has upended everything we thought we knew about city life, with no clear end in sight.

The Times reports that nearly 3,000 small businesses in New York City have closed for good since March; the coronavirus has sucked the life out of not just Gap and J.C. Penney, but CAP Beauty and Bar Sardine. Even the L.G.B.T.Q.+ landmark the Stonewall Inn is begging for money on GoFundMe.

With the death of small businesses like these, New York risks losing its signature and most enviable quality: being the world’s melting pot. When you make the choice to be a New Yorker, you’re committing to a level of intimacy with your environment few other metropolises provide.

That intimacy relies on authenticity, quirks and one-of-a-kind points of view. You’re not going to find that at a Starbucks or Home Depot. But you will at Variety or Garber’s.

What the departure of the big retailers should finally, definitively illustrate, though, is how genuinely hard it is to do business here. The city needs to make it easier for the small businesses that choose to remain to survive.

Our local government can help entrepreneurs and artists flourish by creating tax incentives for commercial landlords to lease the spaces deemed “unsustainable” by corporations to local businesses and nonprofits at lower rents. New Yorkers can choose to invest in our communities by getting offline and back into the streets to shop and live and play. Yes, it’s hard, but there are glimmers of hope — and right now, it’s the people of the city who are leading the way.

“I love New York” is more than a motto; it’s a testament to the true nature of the relationship between this city and its inhabitants. We live everywhere in the city, not just in our apartments. If all New York had to offer were “flagship” big-brand retail and the transactional experiences available anywhere else in America — or online — why bother? Why put up with the city’s grit and tussle?

I can’t fault the people who’ve had to make difficult and complex decisions about how and where their businesses or their families can succeed. But I hope that New York shows the courage, commitment and resilience to replace these vacated spaces with the kinds of organizations that reflect the beautiful diversity and creativity of a city that’s never been about comfort or convenience, but thrives on meeting challenges head-on, and through that painful process of enduring, spins dreams that capture the imagination of the world.

And to those who bailed because being in New York was all about optics, profitability and gross revenues: Please don’t let the bridge and tunnel hit you in the — The New York Times won’t let me say it, but you know what I mean.

Michael Angelo is an artist, designer and the owner of Wonderland Beauty Parlor.