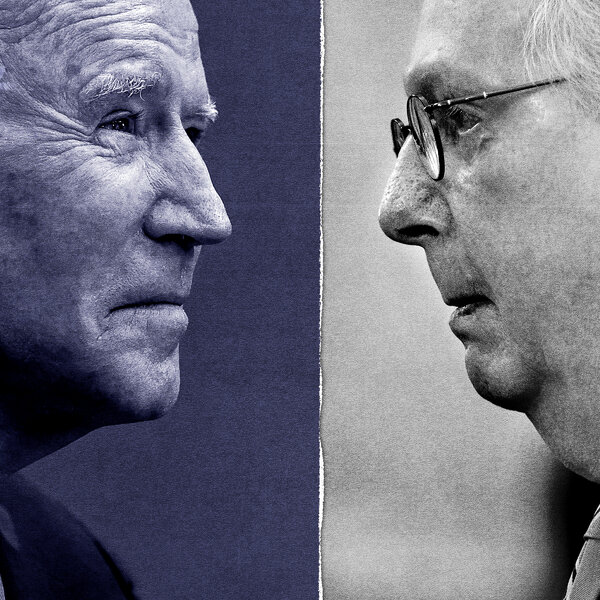 Ms. Cottle is a member of the editorial board.

Wednesday promises to be a big day in Washington. For the first time since taking office, President Biden is scheduled for a face-to-face meeting at the White House with Congress’s “big four” — that is, the top Democratic and Republican leaders from each chamber. The stated topic du jour: infrastructure, and whether there is a snowball’s chance of achieving a bipartisan deal.

White House meetings between Democratic leaders and Donald Trump tended to be nasty affairs. You never knew who’d start hurling grade-school taunts or storm out in a huff. Mr. Trump’s dealings with the Senate Republican leader, Mitch McConnell, could also be touchy. They still are: Just last week, the former president called Mr. McConnell “gutless and clueless” for not working to “expose” the supposed 2020 election fraud.

Mr. Biden has promised to restore civility and comity to bipartisan relations. Members of both parties are itching to see what sort of personal dynamic emerges between the new president and his congressional tormentors, especially Mr. McConnell, a ruthless partisan assassin whom Mr. Biden nonetheless counts as an old friend.

But political friendships aren’t necessarily like normal friendships. Mr. Biden and Mr. McConnell have known each other a long time, having served nearly a quarter-century together in one of the nation’s clubbiest institutions. They have grown to respect each other’s political savvy, horse-trading skills and knowledge of the Senate’s arcane rules and folkways.

Each has a sense of what makes the other tick, and they claim to have mutual trust. There is even a shared personal affection.

Mr. McConnell was the only Republican senator to attend the funeral of Mr. Biden’s son Beau, who died of brain cancer in 2015. He later arranged for a cancer research bill to be named after Beau. In 2011, Mr. Biden spoke at the University of Louisville’s McConnell Center. In Mr. Biden’s final weeks as vice president, Mr. McConnell delivered an uncharacteristically funny, touching, human farewell tribute to Mr. Biden, whom he called “a real friend.”

Make no mistake: These men’s established ties and mutual esteem do not alter their political imperatives. Mr. McConnell will not be abandoning his long-running policy of obstructionism. Neither will he feel compelled to protect Mr. Biden from even the most unhinged attacks by his Republican colleagues — certainly not if his laissez-faire stance during last year’s presidential race is any indication.

Political friends may respect and even admire one another. But they will still slit one another’s throats — metaphorically, of course — when the occasion calls. Just something to keep in mind as the two septuagenarian lions sit down for what is really more of a photo op than a serious strategy session.

But not all political theater is empty. And while Wednesday’s meeting seems unlikely to produce an infrastructure breakthrough, it will send a message about Mr. Biden’s oft-stated commitment to bipartisanship — its value, its limits and his approach to managing the rough spots.

This president’s inclinations toward cross-aisle cooperation have long made many Democrats and progressives nervous. They suspect he is too naïve, too out of touch with today’s nasty, hyperpolarized Congress. They fear he will be rolled by the wily Mr. McConnell, especially if Mr. Biden remains too invested in his vow to win over Republicans.