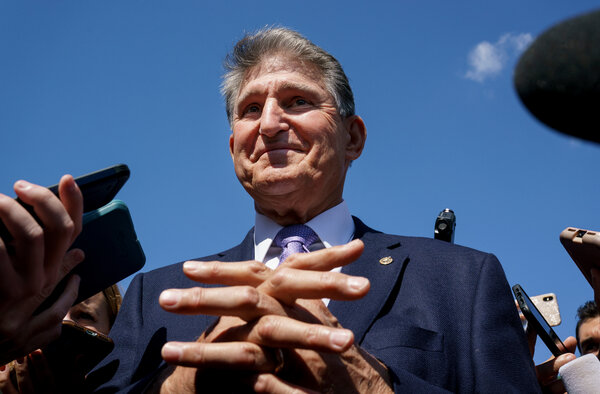 Ms. Cottle is a member of the editorial board.

The squabbling over the Build Back Better plan, the ambitious climate change and social spending package that the Democrats need to pass on a party-line vote, has been running hot, with progressives and moderates squaring off, especially in the Senate. On Wednesday, there were even rumblings that Senator Joe Manchin of West Virginia, the chamber’s most conservative Democrat, had devised a plan to strong-arm his colleagues into giving him his way on the deal or else he’d take his toys and leave the party to become an independent. Mr. Manchin denied the report, which appeared in Mother Jones magazine, with salty language and informed reporters, “I have no control over the rumors.”

Progressives have waited for this moment for so long. From their perspective, they are mere inches from realizing their legislative dreams — except that a smattering of moderate obstructionists are threatening to ruin everything. How can the holdouts be so disloyal? Don’t they know what’s at stake?

Democrats on all sides of this debate are well aware of the stakes. But not all of them have the same values or priorities, politics or ideology. Part of the centrists’ foot-dragging may well be cynical and opportunistic, as their critics maintain. (These are, after all, politicians.) But they also have serious concerns about pieces of the spending plan, not to mention its transformational nature. Their more liberal colleagues may consider these concerns misguided, ill-informed or even ridiculous. But this is what happens when a party owes its majority to a Big Tent coalition. Unity is excruciatingly hard to come by.

As for sucking it up and falling in line: This is not the Republican Party, whose animating force, aggressively fueled by former President Donald Trump, is a sour grievous politics centered on owning the libs — while stacking the courts with conservative judges, of course. Republicans unwilling to toe the Trump line are being marginalized or driven out, creating a purer, more unified cult of personality with no real interest in governance. Democrats still want to govern and legislate and get stuff done, which requires hashing out their differences.

Take Mr. Manchin. Can he be a self-important pain in the butt who knows that annoying his leadership and colleagues plays well back home? Fact check: True. Does he have big donors and powerful interest groups in his state that cheer when he stiff-arms the libs on, say, clean energy? True again. But he also has a different ideological take from the bulk of his caucus. How could he not? Once a Democratic stronghold, West Virginia has been trending red for years, and Mr. Trump won the state by nearly 40 percentage points last November.