On Sunday, voters elected Guillermo Lasso, a former banker and a supporter of free-market policies, as president of Ecuador over Andrés Arauz, a left-wing populist. Some analysts are decrying the end of progressivism, but what we are really seeing is a welcome setback for a strange form of strongman politics: the phenomenon of former presidents seeking to extend their control and influence by choosing and backing their protégés in national elections.

Mr. Arauz was handpicked by former President Rafael Correa, a semiauthoritarian economist who governed Ecuador from 2007 to 2017. The election was a referendum not just on the role of the state in the economy but also more fundamentally on the question, “What, if any, role should former presidents play in politics?”

In Latin America, it has become normal for former presidents to promote surrogate candidates. This is a bizarre form of caudillismo, or strongman politics, combined with continuismo, or lineage continuity, intended to keep rivals at bay.

Today, former presidents are the new caudillos, and they are hoping to extend their rule through their chosen heirs — in what is called delfinismo, from “dauphin,” the title given to the heir apparent to the French throne in the 14th through 19th centuries.

In the last decade, at least seven democratically elected presidents in Latin America were handpicked by a predecessor. The most recent, Luis Arce, came to power in Bolivia in 2020, sponsored by former strongman Evo Morales. These surrogate candidates owe much of their victory to their patron’s blessing, which comes with a price. The new presidents are expected to stay loyal to their patron’s wishes.

The practice binds those newly elected in golden handcuffs, undermining democracy in the process. More than passing the torch, former presidents issue a sort of noncompete contract. In Argentina, a former president, Cristina Fernández de Kirchner, ran as vice president with her chosen candidate, Alberto Fernández. 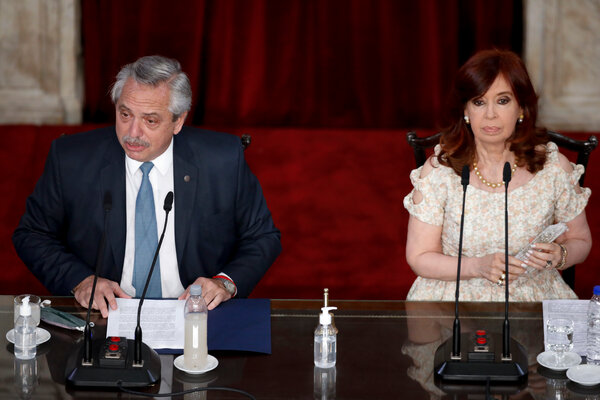 This current style of strongman politics is an update of an update. In the classic version of the strongman politics, which dominated Latin American politics after the wars of independence during the 19th century until the 1970s, many caudillos sought to stay in office by banning or rigging elections, a tactic famously utilized by the Mexican dictator Porfirio Díaz, or by staging coups if they couldn’t win office, a tradition employed by the Cuban dictator Fulgencio Batista in 1952.

This classic model of continuismo was intensely traumatic. In Mexico and Cuba, the model incited nothing less than two world-historic revolutions.

Latin America updated this model of caudillismo. Coups and election bans became unfashionable by the 1980s, and so rather than abolish democracy, it became more common for leaders to rewrite constitutions and manipulate institutions to permit re-election. A re-election boom followed. From Joaquín Balaguer in the Dominican Republic in 1986 to Sebastián Piñera in Chile in 2017, Latin America saw 15 former presidents return to the presidency.

But lately, the model of continuismo through re-election has run into trouble after a number of former presidents found themselves entangled in legal troubles.

In Central America alone, 21 of 42 former presidents have had brushes with the law. In Peru, six ex-presidents from the past 30 years have faced corruption charges. In Ecuador, Mr. Correa was convicted of trading campaign finance contributions for state contracts. He claimed he was a victim of political persecution. His response was to use Mr. Arauz’s campaign as the ticket back to influence. At some point during the campaign, the candidate even promoted the idea that a vote for him was a vote for Mr. Correa.

These legal complications encourage former presidents to promote surrogates who might, at the very least, pardon them if elected.

But this political surrogacy hardly solves the trauma associated with its inherent continuismo. In fact, that makes it more toxic. Except for the former president’s followers, the country sees the gimmick for what it is: an obvious effort at restoration.

The problems with delfinismo go beyond intensified polarization by exacerbating political fanaticism and can lead to even greater problems. In Mexico until the 1990s, where presidents essentially handpicked their successors, former presidents typically observed the norm of retiring from politics, granting the successor sufficient autonomy.

But in the most recent version of delfinismo, successors are not that lucky. The sponsoring former presidents keep meddling. This interference produces governance travails. The sitting presidents either become premature lame ducks, with all eyes turned to the former presidents’ views, or eventually seek a break from their patrons. Splits can unleash nasty civil wars.

Such breaks are often inevitable. Elected delfines face new realities that sponsors never confronted. Frequently they have to clean up messes their sponsors left behind.

Lenín Moreno, the current president of Ecuador, who was selected by Mr. Correa, broke with him on a number of leftist-authoritarian policies, prompted by revelations of corruption. The result was a power struggle that splintered the ruling coalition and hindered the government’s ability to cope with the economic crisis and then the Covid-19 pandemic.

A similar battle occurred in Colombia when President Juan Manuel Santos, chosen by the then president Álvaro Uribe, decided to make peace with guerrillas, defying Mr. Uribe’s preference. The result was a near civil war between those men that rivaled in intensity the war against guerrillas that the government was trying to settle.

There is no easy solution to this type of continuismo. Parties need to stop placing their former presidents on a pedestal. They need to reform primaries to ensure leaders other than former presidents have the means to compete internally. Latin American countries have done a lot to ensure strong competition among parties, but less so within parties.

Nothing screams oligarchy and corruption like a former president trying to stay alive through surrogate candidates. And Ecuador has demonstrated that this political maneuver may end up also empowering rather than weakening the very same political ideologies the former presidents were trying to contain.

Javier Corrales is a professor and the chair of the political science department at Amherst College.