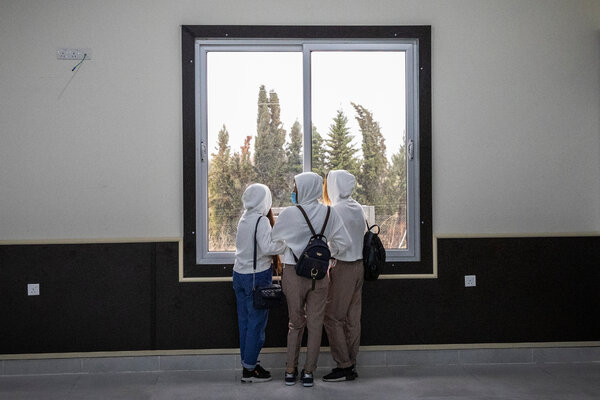 Re “Yazidi Women Once Enslaved by ISIS Reunite With Children” (front page, March 13):

As an immigration attorney, I have followed the plight of the Yazidis for years. Reading your article about the problems of mothers being reunited with their children, I was distressed that the United States has not stepped up to the plate to grant refugee status to the mothers who cannot return home with their children.

I call on the Biden administration, if it hasn’t already done so, to take immediate steps to grant emergency refugee status to any of the mothers who choose to come here. This is exactly what refugee status was designed for.

News like this, while predictable, will always remain shocking to me, a gay Catholic man.

What it means to be Christian, most fundamentally, is to model one’s life after Christ’s. The holiest acts we can perform are those that, like Jesus’ Paschal mystery, embody self-sacrificial love — where others are put first. For Catholics, such moments are sacramental: a chance for us to encounter the invisible God through a visible, material act.

Every same-sex marriage perseveres amid great cost. We have to overcome rejection from family members, rebuke from faith communities, internalized self-hatred, economic obstacles and the very real possibility of violence. These very obstacles make our love necessarily self-sacrificial, and therefore holy.

The fact that the Vatican denies the sacredness of our unions by refusing to bless them is absurd. Our love is the kind that Jesus taught, and God is present in it.

Let the Police Bear the Cost of Brutality

When cities settle cases or pay judgments against violent cops, it’s really the cities and their taxpayers who bear the financial cost of police brutality. What if the money paid to victims of lawless cops came out of police pension funds?

Then, when one cop saw another use unnecessary force, he might no longer think, “I’m standing behind my brother officer no matter what,” but instead, “This jerk’s taking money out from my retirement.”

Unfair to good cops? Perhaps. But show me another way to change the culture of police violence and impunity.

A ‘Brave Spirit’ in Virginia

Re “After Rally and Riot, a Virginia County Fractures” (front page, March 10):

I am a member of a group of white women at Christ Church in Alexandria, Va. We reached out to Bridgette Craighead this summer after reading an article about her courage and commitment as a Black Lives Matter activist. We have stayed in touch through phone calls and Zoom meetings and never fail to be inspired by her.

Because of her activism, she has faced insults, racial slurs and threats. Yet she continues to persevere, organizing voter registration drives, a Christmas coat and shoe drive for 60 families, and drive-in movie nights with showings of “The Emmett Till Story” and “Loving.”

And now she is running for state delegate in a district that has sent Republicans to the statehouse for decades. Her message is one of bringing people together, and giving a voice to those as yet unheard.

We are supporting her in any way we can, and hope that others will recognize her bright, brave spirit.

Robots in the Office? Not to Worry

Re “The Robots Are Coming for Phil in Accounting” (Sunday Business, March 7):

It is true that as artificial intelligence and machine learning become more widespread, tasks previously thought to require human workers will increasingly be performed by computers. But this is good news for college-educated professionals, not a threat to their livelihoods.

Automation has been spreading for decades, and yet high-skilled workers remain in demand. In higher education, we’ve adapted our curriculums to include training in data analytics and A.I. We give our students the critical thinking skills they need to be lifelong learners, to adapt to changing technologies and changing responsibilities. We know that today’s graduates must be prepared for more skilled, ever-evolving careers, completing higher value assignments.

In short, Phil in accounting will find his degree more valuable, his job higher paid and his workday more interesting, precisely because the robots have taken over the dull parts.