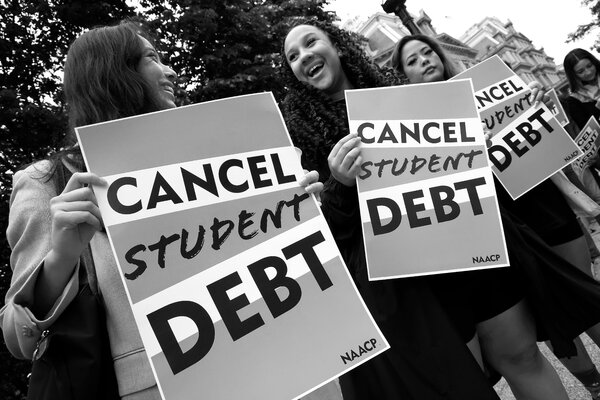 At least 43 million Americans have student loan debt, ranging from hundreds to hundreds of thousands of dollars. Until now, there’s been no hope of a bailout.

Just as some argued that the subprime mortgage crisis was a matter of millions of people choosing to borrow too much, others have said that the student debt crisis is primarily the fault of the debtors. This myth hides that it was a harmful policy decision to encourage disadvantaged students to borrow for college in the first place. In 2008, the federal government was willing to bail out banks after their risky lending practices devastated the economy. We need a similar such bailout today. But unlike in 2008, this bailout would go to the victims of a crisis, not its perpetrators.

For the last three decades, our government’s lending practices devoured borrowers’ incomes, prevented homeownership, and contributed to despairing anxiety. Lenders have denied borrowers access to loan relief programs and for-profit colleges have hounded prospective student borrowers, even when they knew graduates would get little return on their investments. By the time President Barack Obama left office, student loans were just as speculative and commonplace as subprime mortgages.

President Biden has signaled that we must make amends for this debt trap by bailing out the generation of borrowers who have been wronged. But the $10,000 of debt cancellation per borrower that he’s suggested will not be enough.

In 1975, only an estimated one in eight college students used federal student loans to pay for college. During that period, Pell Grants covered much of the cost of attending most public universities, and grants were available to anyone from middle- or low-income families.

In his speech accepting the Democratic nomination for President in 1992, Bill Clinton described a “New Covenant” with America that would include the largest-ever expansion of federal student loans. Until that point, loans had played a relatively small role in funding U.S. higher education. With student loans for all, he said, “the doors of colleges are thrown open once again to the sons and daughters of stenographers and steelworkers.”