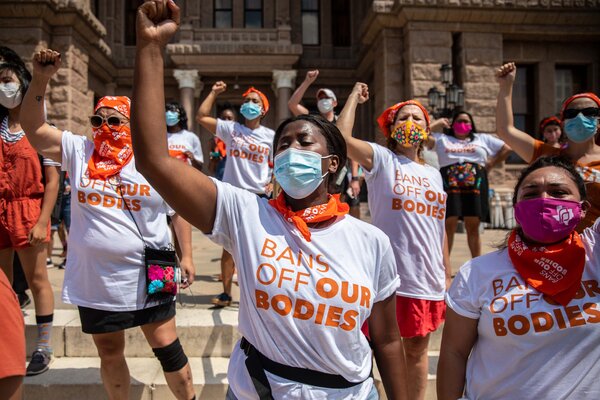 The Supreme Court’s refusal to block the Texas law effectively banning abortions and deputizing private citizens to enforce the ban is an unprecedented intrusion into the constitutional rights of women. It is, as one justice noted, a stunning attack on the rule of law.

The Texas law encourages pro-lifers to become bounty hunters and spy on total strangers who may be desperate to get an abortion. This is creating a horrific environment that is scarily reminiscent of past tyrannical societies pitting one citizen against another because of their personal beliefs.

A majority of the Supreme Court has fallen prey to a dangerous surge to the right that threatens to trample on fundamental human rights.

Excuse me, but aren’t these sanctimonious abortion police the very same people beating the drum for personal freedom of choice, including the choice to spread deadly Covid?

The self-righteousness of Texas legislators will inevitably be challenged after one of their family members or friends requires an abortion due to rape, incest, teenage pregnancy, a fetus with a severe defect or some other reason that’s legally accepted in other states.

Congressional Democrats must use their current majority to codify Roe v. Wade at the national level and pre-empt state laws. The Texas abortion law shows that Republicans will use all of their power to crush civil rights even if it means completely undermining the foundation of U.S. civil law, which is that the party bringing suit must personally have been harmed or represent people who have been harmed by the defendant.

Democrats have the majority now, and so far it seems that they are unwilling to wake up and play hardball. Republicans will continue to roll back civil rights, and Democrats will make symbolic but meaningless gestures in opposition while allowing the Republican efforts to succeed. It’s far past time for Democrats to step up and fight for what they believe in.

Since Texas is allowing regular citizens to sue anyone aiding and abetting an abortion, then maybe it can also have a law that would allow Texans to sue people not wearing a mask or refusing to get vaccinated. After all, the legislators are against abortions because they feel it is murdering innocent children. Refusing to take the proper steps to avoid getting and giving to others the potentially deadly Covid-19 is along the same lines.

It’s difficult to imagine this absurd, horrendous law will withstand, ultimately, Supreme Court scrutiny. If it does, then our system of justice is truly lost.

I’d urge every company to stop doing business with Texas if at all possible. I’d urge all people planning any kind of Texas travel to cancel those plans. I’d urge sane Texans to patronize only those businesses making it clear that they are against this usurpation of women’s rights. And, quite frankly, I’d urge people living in Texas to move to other states.

It is becoming painfully clear that we are two dramatically disparate countries living within the same borders. I no longer believe this can be fixed.

If men could get pregnant, access to safe and legal abortion would be a given.

Keep the Focus on Domestic Dangers

Bret Stephens encourages us to increase our role as the world’s policeman (“We Now Live in a ‘Broken Windows’ World,” column, Aug. 25). We have done this for many years now, but history has shown that eventually it results in failure and decline of “empire” and is detrimental to society in general. The costs of continuing such policing will have dire effects on our economy and quality of life.

The Assassination of Haiti’s President