Since the military takeover in Myanmar on Feb. 1, both the coup-makers and proponents of a return to democracy seem to be locked in an intolerable stalemate. The two sides continue to pursue unilateral strategies in the hope of prevailing over each other.

The Tatmadaw, as the Myanmar military is known, appears to believe it can force its way to and through a next election by way of brutal crackdowns, by dissolving the once-ruling National League for Democracy and by threatening to imprison Daw Aung San Suu Kyi, the country’s former de facto leader, for the rest of her life.

For its part, the anti-coup movement — largely a combination of N.L.D. supporters, Generation Z protesters and civil servants — has been shifting tactics away from predominantly peaceful demonstrations to more violent kinds of resistance. All around Myanmar a form of urban warfare has broken out in recent weeks — in or near the country’s largest city, Yangon; to the west in Chin State; to the east in Kayah and Shan States; in the central region of Sagaing.

With more than 800 protesters killed to date and the prospect of foreign powers like China or Russia taking advantage of the crisis, Myanmar now looks to some like a land of lost options.

But it takes recognizing what this conflict really is about to detect who may now be able to move the needle.

This crisis isn’t just a battle between the military and civilians over the future of democracy. It is the latest evidence that the nation-building process in Myanmar, one of the most ethnically diverse states in the world, is still woefully incomplete more than seven decades after the country’s independence from Britain.

Whoever understands this should then be able to see that the 20 or so ethnic armed organizations that for years have been seeking various degrees of autonomy for their respective peoples may be the kingmakers of the moment.

More than two-thirds of the people of Myanmar are ethnic Bamar, concentrated in the central lowlands, and they have long enjoyed privileged positions in society and with the state. Minority groups have suffered from limited access to resources or economic benefits; their political participation has been restricted — and not only under military rule.

Even during the last election, in November 2020, which was conducted under the democratic leadership of Ms. Aung San Suu Kyi’s N.L.D., some minority parties were essentially disenfranchised.

All ethnic armed groups have been fighting to obtain greater rights and resources for their people, but with different strategies and means. The Kachin, Karen and Shan, for example, have consistently said that a more equal version of federalism is a precondition to peace. But the United Wa State Army and the Arakan Army, two fearsome groups with ties to China, are calling for the creation of independent states within a new confederation.

A total of 10 ethnic armed groups have signed a nationwide cease-fire agreement put forward by a previous military-backed government in 2015 and later endorsed by Ms. Aung San Suu Kyi’s government. But there has been little progress toward a much-hoped-for comprehensive peace deal, even under the N.L.D., partly because of conflicting visions of what an inclusive federal Myanmar should look like.

The 10 ethnic armed organizations that signed the nationwide cease-fire agreement suspended group talks with the Tatmadaw after the coup, arguing that the junta was not a legitimate government. Yet they have mostly respected the cease-fire and, even while denouncing the military’s actions, have maintained individual lines of communication with it.

At the same time, most ethnic armed groups — among both signatories and nonsignatories of the cease-fire pact — have expressed support for the anti-coup protests. They have also welcomed the Committee Representing Pyidaungsu Hluttaw, a group set up by lawmakers ousted in the coup that seeks international recognition, and its interim national unity government. (The military has outlawed the committee and has called the interim government a terrorist group.)

It seems unlikely that Myanmar’s ethnic armed groups will all come together and present a common front against the junta, given their longstanding differences about goals, means and tactics. Even so, they arguably have not had this much political power in many years.

This is partly because the Tatmadaw depends on them more than ever to keep alive the peace process — its only possible source of legitimacy since the coup. 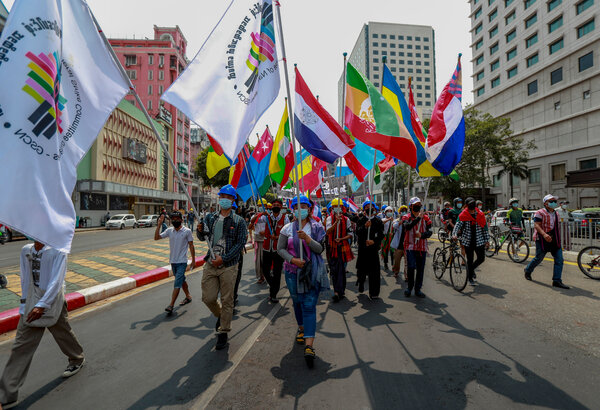 The military leadership is watching warily as the pro-democracy protests, mostly in urban areas, appear to be reinvigorating various local insurgencies at the country’s periphery. Some members of the democratic opposition have also taken shelter in areas controlled by battle-hardened ethnic armed organizations, for example in the Karen, Kayah, Shan and Kachin areas along Myanmar’s eastern and northern borders with Thailand and China.

And the public, having recently endured great brutality at the hands of the military, now seems more sympathetic toward the aspirations of ethnic communities that have experienced repression for decades.

So far, ethnic armed groups have used their newfound clout with the Tatmadaw in three different ways.

Some seem to be largely staying away from the political fray. To them, the current crisis is only the latest episode in the familiar rivalry between the Tatmadaw and the pro-democracy mainstream, both essentially Bamar groups.

Twan Mrat Naing, the commander of the Arakan Army, a formidable group of fighters in Rakhine State, along the Indian Ocean, has said of the N.L.D. and the Tatmadaw: “Our enemy, once united against us, has now broken up and is fighting each other and they both want us to be on their sides.” The United Wa State Army — 30,000 soldiers strong and with a de facto state within a state near the Chinese border — also is taking a back seat.

Both groups, which are among the strongest armed organizations in the country — and which have refused to sign the nationwide cease-fire agreement — appear to have reached an understanding with the junta to not take up arms for now and to steer clear of the anti-coup opposition movement. Their goal seems to be to strengthen their military and administrative control in their respective regions and build up leverage ahead of any future negotiations with a central government, this one or another, over political and security reforms.

Other ethnic armed groups, like the Restoration Council of Shan State, seem intent instead on deepening the crisis. Fomenting unrest may enable some of them to seize military outposts from the Tatmadaw or territory, including from competing insurgent organizations.

For some, the objective appears to be toppling the military government by precipitating a full-on civil war. The Fifth Brigade of the Karen National Liberation Army seems to support regime change. The K.N.L.A. and other ethnic armed groups, together with several local people’s defense forces set up since the coup, seem to have coordinated attacks against Tatmadaw troops in several states.

The rebel Chin National Front, even though it is a party to the cease-fire deal, recently signed an agreement with the interim national unity government to “demolish the dictatorship” and “implement a federal democratic system.”

And then, conversely, there are the ethnic armed groups that are trying to de-escalate tensions — apparently in the hope of becoming intermediaries between the junta and the interim government.

Sources close to some of these groups’ leaders have confirmed to me that in mid-May, as has been reported, the groups sent a letter to the United Nations, the European Union, China, India, Thailand, Japan and ASEAN — official witnesses or observers to the cease-fire agreement — asking for help mediating a dialogue among the Tatmadaw, the interim government and ethnic armed groups.

This is a riskier move than it seems: Supporters of these ethnic armed groups or the general public might see them as traitors for even suggesting negotiations with the Tatmadaw.

In the best of scenarios, however, such a dialogue could help both the military and the democratic opposition formulate new strategic objectives that could transcend their current deadlock.

Whatever happens with that effort, or how well pressure tactics and negotiations can be combined, one thing already seems clear: The future of Myanmar is in the hands of its ethnic armed groups.

Min Zin is a political scientist and the executive director of the Institute for Strategy and Policy-Myanmar, a think tank in Yangon.