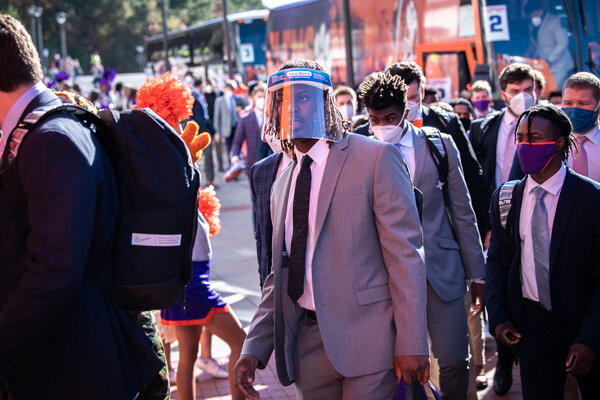 Re “All of the Risk for None of the Money,” by Kurt Streeter (Sports of The Times, Dec. 14), about how college athletes are being trotted out “to provide entertainment amid the pandemic’s most deadly surge”:

Mr. Streeter once again underscores the utter hypocrisy of the “student-athlete” label — a concept that was purposely and strategically created by the N.C.A.A. in the early 1950s as a reaction to state court findings that injured college athletes were, indeed, employees of their institutions and thus entitled to workers’ compensation.

Now, many decades later, these young athletes — the vast majority of whom are Black — still toil without pay in activities that are dangerous in the best of times, and potentially fatal in 2020.

It is long past time for the public to recognize, as a National Labor Relations Board regional director concluded in 2014, that so-called “student-athletes” are, in fact, employees of their universities.

The Supreme Court has now agreed to review a lower court decision touching on related issues (Sports, Dec. 17). But it will not extend to college athletes the panoply of legal protections that all employees enjoy, including the right to a safe workplace.

This Is a War, Too

I am from the Silent Generation. We were born during or shortly after the Great Depression and during World War II.

We would have neither won the war nor survived the Depression if people of today lived at that time. Their freedom was being infringed upon, they would think, with rationing of meat, sugar, eggs, butter, leather and metals, to name a few. Today should be no different. We need to work together to keep our democracy safe for all, not just the few.

Coupons were provided by the government in an amount allotted by family size. Because of leather rationing only three and then two pairs of shoes a year per person were allowed. We had Victory Gardens, raised chickens, had paper drives, and tin and tinfoil drives. We were a part of the common good. Now wearing a mask appears to be too great a burden for many.

Spineless people, are you afraid to cover your faces? We had gas masks in case of invasions. Would people wear them now, or just die?