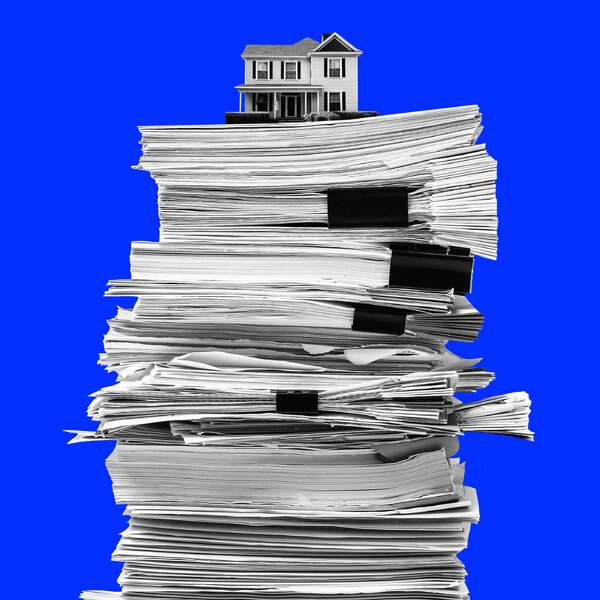 Mr. Dourado is an economist and a senior research fellow at the Center for Growth and Opportunity at Utah State University.

Many of our country’s problems are reducible, in one way or another, to the fact that we have lost the imperative to transform the physical world. While the soft technology of the internet has marched forward, development of real stuff — of steel and concrete — has slowed, hampered by laws that privilege the status quo.

Many Americans experience the fallout from our failure to build in the housing market. Housing costs are at an all-time high, and over the past half-century, the median rent has outpaced the median household income. In our coastal hubs, our most productive cities, the numbers are even more dire. The typical home value in San Francisco, for instance, is $1.48 million, 12 times the city’s median annual household income of around $120,000.

Housing costs exacerbate economic hardship and inequality. Because the poor spend a greater share of their income on housing, high costs hit them the hardest. State homelessness rates track housing prices. The economist Matthew Rognlie showed in 2015 that capital’s rising share of income, an indicator of growing inequality, was caused entirely by increases in housing prices. Housing costs also perpetuate educational inequality; they are 2.4 times as high near high-scoring public schools as near low-scoring public schools. Children whose families are priced out of the best school zones forgo hundreds of thousands of dollars of lifetime income as a result.

Although housing is for many of us a proximate manifestation of the failure to build, it is not the only one. America’s airports lag those in Asia in Europe, and high-speed rail is practically nonexistent. We have more electric power outages than residents of any other rich country. Our infrastructure inadequacies slow our response to climate change and lower living standards.

The solution to high housing costs could not be simpler: Build more homes. To address housing affordability, many progressives have advocated subsidized affordable housing programs. These programs may not be adequate to generate sustained cost reductions, and they aren’t necessary. What will work with certainty are the laws of supply and demand. If we increase the supply of housing enough, prices will fall. Any solution to our infrastructure problems will likewise boil down to the need to build infrastructure.

But to build housing and infrastructure, we must sweep aside the regulatory obstacles that stand in the way.

In housing, zoning and related rules are the culprits behind the restricted supply of new homes. Zoning, in theory, is supposed to separate incompatible uses of land — for example, keeping polluting factories separate from housing. In practice, it has an ugly history of promoting racial segregation. In 1910, Baltimore adopted the country’s first explicitly racial zoning law, barring Black residents from moving into predominantly white neighborhoods and, cynically, vice versa. The Baltimore law was copied in cities all over the South until the Supreme Court held that a version in Louisville, Ky., was unconstitutional in 1917. Even after this ruling, explicitly racial zoning codes in some cities tested its limits.

While we would not tolerate open segregationist justifications for zoning today, laws that ban multifamily construction in certain neighborhoods — along with parking minimums and restrictions on lot coverage, setbacks and building heights — continue to perpetuate segregation by income and race. These rules reduce the supply of housing, increasing its cost. Recent research estimates the value of the “zoning tax,” the amount by which zoning rules are artificially raising the cost of land. In our coastal hubs — San Francisco, Los Angeles, Seattle and New York — the zoning tax per quarter-acre of land exceeds twice the city’s median income. In San Francisco, it’s four times the median income.

In infrastructure, too, the proximate obstacle to building more is legal. Under the National Environmental Policy Act, passed in 1969, federal agencies must produce a detailed statement of environmental impacts for any action — including granting a permit — that significantly affects the human environment. In contrast with the ugly motivations driving zoning, NEPA came into existence riding a wave of environmental consciousness. It was motivated by two well-meaning but mistaken beliefs: that material progress was the enemy of environmental quality and that environmental justice could be served through more citizen voice.

The act slowed progress in infrastructure. Per-mile spending on the Interstate System of highways tripled between the 1960s and the 1980s, with the inflection point coming in the early 1970s, when NEPA took effect. And in practice, the citizen voice function of NEPA has been used not to enact environmental justice but to let wealthy communities oppose projects — including transportation and public works projects — that inconvenience them. To protect against community opposition, environmental impact statements under NEPA have ballooned over the years and now take an average of four and a half years to complete. One that was finalized in 2019 took almost 16 years.

Actions that affect the environment deserve scrutiny, but the biggest cost of NEPA is with respect to federal actions that have no impact. When permit approvals do not significantly affect the human environment, agencies and project sponsors have to prove that through another report. These environmental assessments, of which over 10,000 are produced per year, likewise add years to the process.

And until an environmental assessment or environmental impact statement is finalized, no work on the project in question can begin. Even after finalization, a lawsuit filed by virtually anyone can challenge the adequacy of these documents and bring the project to a halt.

The delay and risk in government decision making affect both government-led initiatives and private sector projects, which depend on speedy returns for financing. One reason venture capitalists have invested so much in software companies and relatively little in transformative physical-world technology is that the returns in software come faster and face less regulatory risk.

Environmental review has far-reaching economic and social consequences. It slowed the 2009 economic recovery, as infrastructure projects specified in the American Recovery and Reinvestment Act were subject to at least 192,705 NEPA reviews. Projects funded through this year’s infrastructure bill will undoubtedly face similar delays. Even immigration policy is not immune to NEPA lawsuits. Arizona is challenging President Biden’s order to halt construction on the border wall on NEPA grounds.

To become a nation that builds, we must tear down the regulatory obstacles. In housing, ordinances that prohibit multifamily housing need to go. Other policies that limit density, like parking minimums and height restrictions, must be liberalized.

If we want to build infrastructure as well as housing, we need to address environmental review as well as zoning. We must protect the environment, but we need not do it indirectly with laws that operate only through paperwork and court cases. We should do it directly — with stricter air and water standards, smarter conservation policies and a carbon tax. A direct approach would enable speedy government decisions and get shovels in the ground. A pro-building, pro-environment deal, eliminating environmental review in favor of these direct protections, could improve the environment through stricter substantive standards and through a stimulative effect on new, clean infrastructure.

How did the most dynamic country on the planet become so sclerotic? We did it to ourselves. We enacted laws that privilege the status quo at the expense of change and progress. We liberally passed out veto rights to anyone with the money and wherewithal to hire a lawyer. If we want to reverse the damage and create a more prosperous future, we must make it easy to build.

Eli Dourado is a senior research fellow at the Center for Growth and Opportunity at Utah State University.