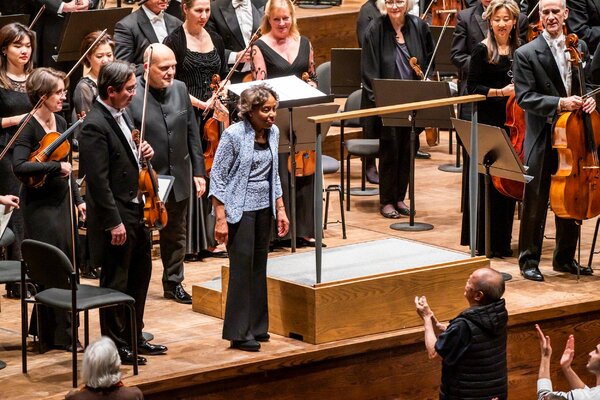 In “Reinventing the American Orchestra” (Arts & Leisure, Feb. 14), Anthony Tommasini observes that “a return to normalcy in the music world will not do.” But he devotes most of the discussion to orchestras’ programming, subscription structures and activation of their concert halls, which, while important and inspiring, will still be nowhere near enough.

After a pandemic that has asymmetrically affected those who have less, and who are marginalized or oppressed, orchestras — and all arts organizations — must come back with a new will to engage with their whole communities. It goes beyond marketing to new audiences; it’s about accessible ticketing policies, producing events with and in communities, and including with new urgency the young people who have been forgotten by failing music education infrastructure in public schools.

Orchestras are already thinking deeply about the implications of the post-Covid world, and not only those in major urban areas. In smaller cities, as well as suburban and rural areas, orchestras can release the power of music to aid in our communal healing.

Simon Woods
New York
The writer is president and chief executive of the League of American Orchestras.

A Critical Shortage of Oxygen

Re “A Shortage Cuts Off Oxygen to Mexico’s Sickest” (front page, Feb. 10):

The desperation for oxygen is a reality that is happening worldwide. The surge in demand for oxygen spurred by the Covid pandemic has created shortages of this essential medicine in South Africa, Zimbabwe, Nigeria, Egypt, Pakistan and even Los Angeles.

Political leaders, health care workers and family members of Covid patients have pleaded for urgent help as the quantities of oxygen needed overwhelm existing capacity. No one who has seen a loved one gasp for breath can forget the horror.

We must act. The Clinton Health Access Initiative and our partners work alongside governments to build sustainable systems and ensure that oxygen is available when and where it is needed, that guidelines for its use are clear and that health workers are trained to use it properly.

More support is needed — from institutions, agencies, donors and governments — to address the acute challenges of Covid and beyond.

Racism and the Minimum Wage

As a union and community organizer for more than 38 years, I have seen the racism in legislative campaigns against raising the minimum wage, in which the restaurant industry spends millions to defeat any minimum-wage increase, but especially increases for tipped employees.

Each time community allies in Chicago and Illinois and other cities and states petitioned for a raise in the minimum wage, including tipped workers, the restaurant industry and its corporate allies used the same racist tropes with state legislators and the public: low-wage, tipped employees — who are disproportionately Black and brown women — are too young to deserve a living wage, are just learning job skills and are only earning “pin money.”

According to the Economic Policy Institute, the average age of minimum-wage workers is 36; 89 percent are not teenagers; 28 percent have children, and 57 percent work full time, and on average they earn more than half of their families’ total income.

We need one fair wage for all workers.

Keith Kelleher
Chicago
The writer is a retired president of the Service Employees International Union (health care) in the Midwest.

When a Museum Sells Its Art

Deaccessioning will always be fraught. The pros and cons are known; we’ve argued about it for years.

What I ask is that deaccessioning decisions be followed by a display of deaccessioned items. Label them as deaccessioned, with acquisition date and display and loan history. Publicize the “Deaccession Gallery.”

Solicit comments; record the chatter. Patrons will be stunned by the sale or trade of some things. They’ll agree that others should go. Some patrons will be enraged. Others will resign themselves to an item’s release.

Deaccessioning is always unpleasant. But with post-deaccession display it won’t be an unpleasant surprise. I imagine that the Deaccession Gallery will be among the museum’s most visited.