We’re covering President Biden’s first meeting with Prime Minister Boris Johnson ahead of the G7 summit, and E.U. calls for a Covid inquiry. 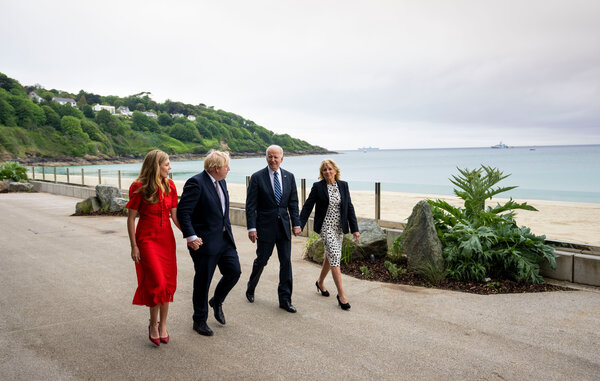 Biden and Johnson look to a new era

President Biden and Prime Minister Boris Johnson of Britain on Thursday used their first meeting to accentuate what they said was a growing divide between democracies and their autocratic rivals, led by Russia and China. Biden and Johnson met in Cornwall, before Friday’s Group of 7 summit. Here are the latest updates.

The two leaders unveiled a new “Atlantic Charter” as they sought to focus the world’s attention on emerging threats from cyber attacks, the Covid-19 pandemic and climate change.

In what he hopes will be a powerful demonstration that democracies — and not China or Russia — are capable of responding to the world’s crises, Biden also used his first full day abroad to formally announce that the U.S. would donate 500 million doses of the Pfizer-BioNTech Covid vaccine to 100 poorer nations.

A source of tension: One of the toughest issues is the status of Northern Ireland, where Brexit-fueled tensions threaten a return of sectarian violence. Biden is a Roman Catholic and devoted Irish-American, fueling speculation that he will be more favorable to the Irish nationalist cause.

The E.U. backs calls for a Covid inquiry

Leaders of the European Union joined calls for a full investigation into the origins of Covid-19, which was first discovered in Wuhan, China. The European Council president pledged “support for all the efforts in order to get transparency and to know the truth.”

The comments came ahead of the Group of 7 summit, which starts on Friday, during which world leaders will be under pressure to do more to stop the coronavirus.

An inquiry this year by the World Health Organization found that it was “extremely unlikely” that the virus leaked from a lab in China, but many saw it as incomplete because of the Chinese government’s lack of cooperation. Governments and scientists have been calling for a more complete examination of the origins of the virus.

Late last month, President Biden ordered U.S. intelligence agencies to investigate the origins of the virus, an indication that his administration was taking the possibility of a lab leak seriously.

Access to China: Ursula von der Leyen, the president of the European Commission, said that “investigators need complete access to the information and to the sites” to “develop the right tools to make sure that this will never happen again.”

Moderna requested an emergency authorization from U.S. drug regulators for use of its coronavirus vaccine on 12- to 17-year-olds.

An audit unearthed more than 9,000 uncounted deaths in the Indian state of Bihar, significantly higher than the 5,500 deaths reported.

Singapore said that it would ease some social restrictions after nearly a month of tough measures.

Eight of the 10 least-vaccinated U.S. states are in the South, a reflection of vaccine hesitancy and poor access to health care.

China pushes back against sanctions

Lawmakers in Beijing approved legislation on Thursday that would ban multinational companies from complying with foreign sanctions against China, leaving businesses between a rock and a hard place.

The U.S. and the E.U. have prohibited any dealings with a growing list of businesses and people accused of human rights violations. But companies that obey those laws would now risk violating Chinese laws.

The new legislation was the latest in a series of moves by Beijing to push back against international pressure on its conduct in Hong Kong and in the Xinjiang region.

Monsoon rains knocked down a dilapidated building in Mumbai, killing at least 11 people and injuring seven others, the police said on Thursday. Several parts of the city were flooded.

The head of China’s central bank said that inflation was “basically under control” after people voiced worries over data showing quickly rising prices.

Saudi Arabia is pursuing an ambitious plan to secure the hosting rights to the 2030 World Cup, but the effort faces political and technical obstacles.

Pope Francis rejected the resignation of a German archbishop who had sought to leave his position to take responsibility on behalf of the church hierarchy for decades of sexual abuse by priests.

Famine has afflicted 350,000 people in Ethiopia’s Tigray region, a starvation calamity bigger at the moment than anywhere else in the world, United Nations agencies said.

The company behind the Keystone XL oil pipeline — long opposed by environmentalists — canceled the project, which would have carried petroleum from Canadian tar sands to Nebraska.

Researchers in Tulsa, Okla., found evidence of at least 27 coffins that may contain victims of the racist 1921 massacre there.

Among the people in Afghanistan worried about the U.S. troop withdrawal are interpreters, who are making urgent requests for U.S. visas under a special program meant to protect them. Employment by the U.S. military often makes them a target. Many say they are seized by dread, fearing they will be denied, or approved only after they have been hunted down and killed.

The other side of the climate crisis

Climate change and biodiversity collapse have traditionally been treated as two separate crises. According to scientists on two leading research panels, that’s the wrong way to look at things. A new report says we can’t effectively address either problem without looking at the state of nature as a whole. Here’s what to know.

How we got here

The lead culprits in the biodiversity crisis: habitat loss because of agriculture, and, at sea, overfishing. For climate change, it’s the burning of fossil fuels.

Businesses and countries have increasingly looked to nature as a way to offset their emissions, for example, by planting trees to absorb carbon. But the science is clear: Nature can’t store enough carbon to let us keep on spewing greenhouse gases at our current rates.

By protecting and restoring nature, the report said, we can safeguard biodiversity, help limit warming, improve human well-being and even find protection from the consequences of climate change, like intensified flooding and storms.

In Brazil, parts of the Cerrado, a biodiverse savanna that stores large amounts of carbon, have been planted with monocultures of eucalyptus and pine in an attempt to meet a global reforestation goal. The result, researchers have written separately, is a disaster that destroys the native ecosystem and the livelihoods of local communities, including Indigenous people.

The Tribeca Festival is back and many films will be available online. Here’s your guide to this year’s movie lineup.

A new Amazon service will automatically share millions of people’s home internet with strangers. It’s not as creepy as it sounds, Wirecutter says.

That’s it for today’s briefing. See you next time. — Melina

P.S. The Times won multiple awards in the Silurians Press Club’s Excellence in Journalism competition for its work about New York City and the region.

The latest episode of “The Daily” is about Dr. Katalin Kariko, a pioneer behind mRNA vaccines.

You can reach Melina and the team at [email protected].