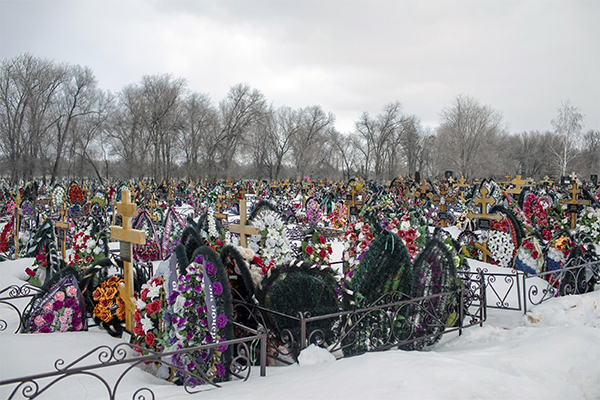 At least 300,000 more people died last year during the coronavirus pandemic than were reported in Russia’s most widely cited official statistics.

Not all of those deaths were necessarily from the virus. But demographers see “excess deaths” as the most accurate way to assess the virus’s overall toll. By that measure, the pandemic killed about one in every 400 people in Russia, compared with one in every 600 in the U.S. For much of the last year, Russia has appeared more focused on the public-relations and economic aspects of the pandemic than on fighting the virus itself, but the deaths are an open secret.

Context: The artificially depressed official numbers have seeded widespread distrust, confusion and vaccine hesitancy. In February, a poll found 60 percent of Russians said they were not planning to get Russia’s Sputnik V vaccine.

In India, which has long avoided a full-frontal wave, the coronavirus is out of control as vaccinations lag.

A Chinese official acknowledged that the country’s vaccines had a low overall effectiveness, which could mean more doses or booster shots would be needed for the more than 60 countries that have approved their use.

The B.1.1.7 variant is more contagious and deadlier than the virus that dominated last year. Watch its spread in this frightening graphic.

China levied a record $2.8 billion antitrust fine against Alibaba, the government’s biggest move yet in its campaign to tighten supervision over Big Tech.

The fine comes after an investigation into whether the e-commerce giant had broken China’s antimonopoly law. Alibaba accepted the fine, the equivalent of just 4 percent of its domestic sales in 2019, and issued a conciliatory statement.

The penalty may be the first of several internet crackdowns to come. Unlike those in the U.S. and Europe, China’s campaign is already starting to influence how the country’s internet giants operate, a reflection of how private companies must stay in Beijing’s good graces to survive.

After a bloody and contested presidential election, hundreds of people have been taken from the streets and forcibly detained.

Many said they were hooded, drugged and beaten in prisons, police stations and military barracks, and families are struggling to find relatives who have been disappeared.

The violence comes three months after President Yoweri Museveni won a sixth five-year term in office in the most fiercely contested election in years. Now, his government appears intent on breaking the back of the political opposition with tactics that recall those of former dictators.

The opposition: Bobi Wine, a magnetic musician-turned-lawmaker who galvanized youthful crowds of supporters, is largely confined to his house and downtrodden.

Quotable: “They should tell us if he’s dead,” said Jane Kyomugisha, whose brother has been missing since January. “Give us back the body and let our hope end there.”

Prince Philip, the Duke of Edinburgh, husband of Queen Elizabeth II and a staunch defender of the monarchy, died on Friday at age 99. Read our full obituary here, watch a video tribute and take a look at his life in pictures.

A month after his explosive interview, Prince Harry will attend his grandfather's funeral on April 17. Meghan, Duchess of Sussex, will stay in California on doctor’s orders because of her pregnancy.

The pandemic has hampered public mourning: Philip will not lie in state for a public viewing or have a state funeral. But Britons still gathered outside the gates of Windsor Castle.

Times reporters have taken a close look at his life and legacy, including his long marriage to the queen, how “The Crown” changed his image, his royal upbringing and his sense of style.

The Natanz nuclear facility in Iran mysteriously lost power on Sunday in what officials called an act of sabotage. After a successful first week of negotiations aimed at reinvigorating the Iran nuclear deal, the indirect talks between Washington and Tehran will continue on Monday in Vienna.

The death toll in Myanmar military’s bloody crackdown on the nationwide resistance to its rule has passed 700, a human rights group reported, including 82 in a single city on Friday.

Older women in Australia have found meaning, friendship and activity in shared spaces, a counterpart to communal “men’s sheds” aimed at retirees.

What Else Is Happening

Russia is moving troops, tanks and heavy artillery to its Ukrainian border, its largest deployment in seven years.

More than 20,000 unaccompanied minors are in shelters after crossing the U.S. southern border, and 15,000 more could arrive by June, in a major test for the Biden administration.

In an effort to boost his sliding poll numbers, President Recep Tayyip Erdogan of Turkey is touting an ambitious idea to carve a new shipping route through Istanbul.

In Jordan, the standoff between King Abdullah II and his half brother, Prince Hamzah, bared family tensions and social turmoil.

My colleague Pui-Wing Tam has family across the globe. She and one of her sisters live in San Francisco. Another sister, Pui-Ying, is a pediatrician in Malawi. Their parents live in Hong Kong. Now they are at the mercy of vaccine geopolitics, each wondering who will be inoculated last.

After a year’s delay, the Tokyo Olympics are set to begin in July, with the Paralympics scheduled to start in August. Years of planning — and billions in television dollars at stake — mean Olympic organizers are keen to hold the event without postponing again.

But polling in Japan has trended strongly against the Games, as Motoko Rich and Hikari Hida report in The Times. Thousands of athletes and other participants will be heading to Tokyo, and less than 1 percent of Japan’s population has been vaccinated, CNBC reports. The country’s experience of the coronavirus pandemic has been comparatively mild, with the levels of infections and deaths far below those of the U.S. or Europe. But that’s not guaranteed to continue.

Though organizers have said that vaccinations will not be mandatory, the International Olympic Committee will supply vaccines for any competitors who need them. Organizers are also barring spectators from overseas, and cheering is forbidden at the Olympic torch relay, which kicked off in Fukushima Prefecture last month.

One thing that is staying the same: The Games will still be called Tokyo 2020, reflected in heaps of T-shirts, mugs, signage and other branded merchandise.

Start your week with a slice of Florida lime pie, which is a little richer than the more well-known Key lime pie.

What to Listen to

DMX, the rapper who died on Friday in New York, had a string of No. 1 albums that electrified audiences and reflected his gritty past. Here are 10 of his essential songs.

In “Empire of Pain,” the investigative journalist Patrick Radden Keefe takes on the Sacklers, the American dynasty behind OxyContin.

That’s it for today’s briefing. See you next time. — Amelia

P.S. Will Shortz has edited roughly 10,000 crossword puzzles since he joined The Times in November 1993.

On Friday, “The Daily” handed its airtime over to Episode 3 of “Odessa.” And on “Still Processing,” can Disney move beyond its racist past?

Sanam Yar contributed to this briefing. You can reach Amelia and the team at [email protected].