We’re covering the inauguration of President Joe Biden, India’s vaccine gifts to its neighbors and the resurfacing of Jack Ma. 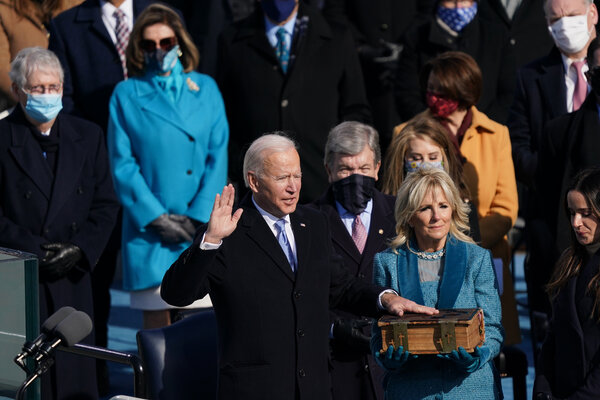 ‘This is democracy’s day’

With his hand on a five-inch-thick Bible that has been in his family for 128 years, Joe Biden recited the oath of office and became the 46th president of the United States, at a moment of profound crisis.

After a deeply tumultuous transition, including the storming of the Capitol by supporters of now-former President Trump, “democracy has prevailed,” Mr. Biden said, in a speech that immediately laid out the contrast between himself and his predecessor. He now begins a swift effort to undo many Trump policies.

Vice President Kamala Harris became the first woman — and the first woman of color — to be sworn into the office of vice president. With the Senate now split evenly between Democrats and Republicans, Ms. Harris may find herself casting the decisive vote for many crucial pieces of legislation, as the vice president wields tiebreaking power.

Highlights from the ceremony: Lady Gaga and Jennifer Lopez performed. It was impossible to ignore the symbolism of the scene at the Capitol, so different from the attack on the building just two weeks ago. Amanda Gorman, 22, became the youngest inaugural poet: “There is always light, if only we’re brave enough to see it,” she read from her poem.

Complications with China: Last-minute measures by the Trump administration against China could potentially box in Mr. Biden, forcing him to either look weak on China if he reverses the moves or incur Beijing’s wrath. Beijing imposed sanctions on 28 U.S. individuals, including former Secretary of State Mike Pompeo.

A vaccine gift from India

India said on Wednesday that it was starting to supply its locally manufactured version of the AstraZeneca vaccine to nearby countries, even as the government continues its mammoth effort to inoculate hundreds of millions of people at home.

The first doses were expected to be delivered to Bangladesh, Bhutan, the Maldives, Myanmar, Nepal and the Seychelles beginning on Wednesday, India’s Foreign Ministry said, adding that the doses sent were being donated. The vaccine was developed by AstraZeneca and Oxford University and is manufactured domestically by the Serum Institute of India.

A study showed that sniff-based coronavirus tests might detect enough cases to substantially drive transmission down. Only a minority of people infected end up spiking a temperature, but measuring whether someone has their sense of smell is a key indicator.

If you have 4 minutes, this is worth it

War correspondents suit up for inauguration

For the swearing-in of Joe Biden, some reporters and photographers brought along protective gear used in combat zones, and their newsrooms gave them extra resources for handling any situation gone wrong. Above, National Guard troops outside the Capitol.

Many news outlets sent those accustomed to covering wars and political violence to cover what is usually a tame political pageant.

Jack Ma: The Alibaba Group co-founder made his first public appearance since late October, speaking at an event honoring educators in China’s village schools. There had been speculation about his fate after he criticized China’s state-run banks and the government halted a huge I.P.O. for his Ant Group company.

India farmer protests: The government on Wednesday offered to suspend for up to 18 months the implementation of new farm laws that have triggered historic protests. Farm union leaders said they would now consider calling the demonstrations off, Reuters reported.

Surrogacy in China: A glamorous Chinese actress was accused by her estranged partner of abandoning two surrogate babies, stranding him in the U.S. to take care of them. The accusations drew a fiery response online, including from the state-run media. It’s sparking a conversation on how China limits surrogacy at home.

Bali tourist deportation: An American woman who has been living in Bali during the pandemic is expected to be deported Thursday after she praised the Indonesian island as “queer friendly” and offered to help foreigners enter the country despite its coronavirus travel ban. Immigration officials said she was “spreading information that could unsettle the public.”

Snapshot: Above, the docks of an abandoned mine in Moengotapoe, Suriname. The South American country has become a hot prospect for oil companies looking to produce fossil fuels while spending less. Concerns about climate change are not hampering interest in Suriname.

What we’re reading: This Town & Country article on the first dogs. There are many dog lovers on the briefings team, and so the arrival of Champ and Major Biden at the White House is an event of high interest.

Cook: This kimbap, or “seaweed rice,” is often mistakenly referred to as sushi, but it is a popular Korean dish with its own unique flavors and history.

Watch: In “The Salt of Tears,” a young Frenchman juggles three women, hoping to be destroyed by love. He gets his wish, but not in a way he imagined.

Do: High-intensity workouts can be great for health. But a new study shows that the impacts on blood pressure, body fat and other aspects of your metabolism may be greater after standard half-hour, moderate exercise.

Try something new. At Home has our full collection of ideas on what to read, cook, watch, and do while staying safe at home.

With reporter-staffed bureaus in some 30 countries, The Times can report quickly on breaking news happening almost anywhere. Our three main hubs of newsroom operations — New York, London and an Asia hub that has been in Hong Kong but is moving to Seoul — are at the center of that effort. Here’s a glimpse at how it works.

At the end of the workday in New York, editors will hand off coverage to editors in Hong Kong and Seoul, who are currently 13 and 14 hours ahead on the clock. As editors in Asia wind down their day, a waking London newsroom will take over as the primary hub. Several hours later, that team will pass the baton back to New York, and it all repeats again, a rotation that is critical for a 24-hour news operation.

“There’s a lot of overlap,” said Adrienne Carter, The Times’s Asia editor, “so there’s probably only a handful of hours where any one group is on its own.”

The Asia hub oversees all coverage of its region of the world, which could be anywhere from China to Australia, and that alone can be demanding, Ms. Carter said. But on any given day, the team may handle stories in any part of the world. The London hub then serves as a bridge between Asia and New York.

Jim Yardley, the Europe editor, said that the way the international newsrooms are structured helps makes the joint efforts seamless. “One of the things about London and Hong Kong is that, primarily, they are outgrowths of the International desk, but they are part of every desk in many ways,” he said. “It’s an attempt to actually make the work more collaborative and less siloed.”

Thank you
Carole Landry helped write this briefing. Theodore Kim and Jahaan Singh provided the break from the news. You can reach the team at [email protected]

P.S.
• We’re listening to “The Daily.” Our latest episode features Biden supporters talking about his inauguration.
• Here’s our Mini Crossword, and a clue: Snake that can weigh up to 60 lbs. (three letters). You can find all our puzzles here.
• The Times won the Philip Meyer Journalism Award from Investigative Reporters and Editors for its coronavirus tracking project that has been keeping count of cases since the beginning of the pandemic.