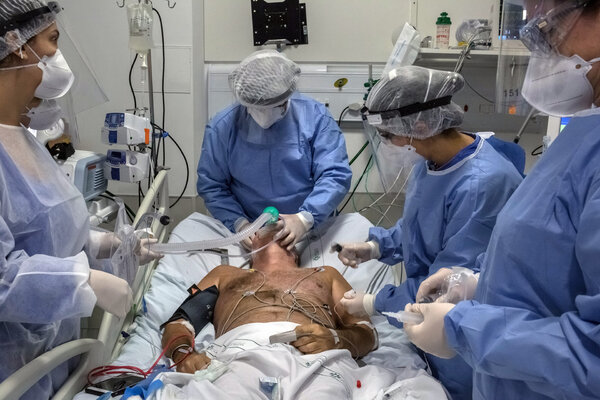 The world recorded the 200 millionth detected case of coronavirus infection on Wednesday, a daunting figure that is more than the populations of Germany, France and Spain combined.

It took more than a year for the pandemic to reach 100 million cases, and little more than six months to double that, according to Johns Hopkins University.

In the U.S., the Biden administration is developing plans to require all foreign travelers to be vaccinated against Covid-19, with limited exceptions, according to an administration official with knowledge of the plans. The U.S. began barring travelers from some countries as early as January 2020.

Booster shots: The World Health Organization called for a moratorium on booster shots until the end of September to address global disparities in vaccination rates. The pause would help free up vaccine supplies so that all countries could vaccinate at least 10 percent of their populations.

Britain: The nation will expand vaccinations to include 16- and 17-year-olds with no underlying health conditions within a few weeks. Previously, the vaccine was made available to children 12 to 17 with underlying conditions.

Israel: After all but declaring victory over the virus earlier this year, Israel is set to reintroduce restrictions. The measures include requiring vaccines and masks for more kinds of gatherings, a work-from-home policy and more sweeping travel restrictions.

Pakistan: The nation surpassed one million vaccinations per day for the first time since the vaccines became available, after cajoling and threats by the government.

China: Also once hailed as a success story in curbing the virus, the government has resorted to strict lockdowns and aggressive testing, even barring people in some cities from leaving their homes, to combat the country’s worst outbreak in a year.

Ethiopia: Abebech Gobena was known to many Ethiopians as the “Mother Teresa of Africa.” An organization she started as an orphanage in 1980 has served some 1.5 million Ethiopians. Ms. Gobena died last month of complications of Covid-19.

A financial collapse among the world’s worst

Lebanon, a small Mediterranean country still haunted by a 15-year civil war that ended in 1990, is in the throes of a financial collapse that the World Bank has said could rank among the world’s worst since the mid-1800s.

Since fall 2019, the Lebanese pound has lost 90 percent of its value, and annual inflation in 2020 was 84.9 percent. As of June, prices of consumer goods had nearly quadrupled in the previous two years, according to government statistics.

Years of corruption and bad policies have left the state deeply in debt. Now, the bottom has fallen out of the economy, leaving shortages of food, fuel and medicine.

Quotable: “I have no idea how we’ll continue,” said Rania Mustafa, a mother in Tripoli who planned to sell her furniture to pay the rent.

Military tensions: Israeli forces responded to rocket fire from Lebanon with artillery strikes on Wednesday. No injuries were reported on either side, and no one had claimed responsibility for the rocket fire.

Sports as a propaganda tool

The defection of the Belarusian sprinter Kristina Timanovskaya at the Tokyo Olympics is shedding light on a dictatorship where no sphere of life can evade politics.

Like much else in Belarus, sports is a family-run business. That family belongs to President Aleksandr Lukashenko, who has held sway in the Eastern European country for 27 years. He has long used sports as a propaganda tool, leading athletes to fear reprisal at any sign of dissent or poor performance.

“I can argue that with a very high degree of probability that she would be sent to prison, tortured, deprived of sleep and would not be given food and water,” said Aleksandr Opeikin, who leads an organization that opposes the government.

The latest: The sprinter arrived in Poland, which offered her and her husband political asylum, after departing Tokyo on Wednesday.

Sydney McLaughlin of the U.S. broke her own world record in the women’s 400-meter hurdles to win her first Olympic gold.

India has won only one Olympic gold medal in recent decades. But since the last Games, the government has overhauled an athletic system that was underfunded and corrupt.

As fires in Turkey blazed uncontrollably for an eighth day on Wednesday, President Recep Tayyip Erdogan was under attack for his handling of the disaster, as well as for his broader management of an economic crisis and the pandemic.

Thousands of people were forced to flee their homes in Greece as a large wildfire, fueled by drought and a searing heat wave, tore through an area north of Athens. Dozens of homes were burned.

What Else Is Happening

Mexico sued 11 gun manufacturers and suppliers in the U.S., accusing them of facilitating the flow of weapons to powerful drug cartels. The complaint says the companies distributed and sold guns “in ways they know routinely arm the drug cartels in Mexico.”

Prosecutors in three New York counties said they were exploring criminal investigations into Gov. Andrew Cuomo’s actions. The inquiries may increase the political pressure on the governor to resign, calls he has defied, after the state concluded that he had sexually harassed 11 women.

The U.S. Senate Foreign Relations Committee voted to repeal the 1991 law that authorized the Persian Gulf War and the 2002 law that authorized President George W. Bush to invade Iraq and topple Saddam Hussein, sending the resolution to the Senate floor.

In 2019, the Japanese government gave a $5,800 bottle of whiskey to U.S. Secretary of State Mike Pompeo, second from left, as a gift. It’s gone missing, and the State Department in Washington is investigating.

Architecture that changed the world

What are the most significant works of postwar architecture? T Magazine asked architects, designers and journalists to make a list of 25 important buildings constructed since World War II. The goal, our features director Kurt Soller writes, was to surface work that “had not only reshaped the world and era in which it was introduced but also has endured and remains influential today.”

The list covers a range of styles, countries and aesthetics, though some names — modernists like Ludwig Mies van der Rohe, Louis Kahn and Lina Bo Bardi — come up again and again. Well-known picks include the Seagram Building in New York, the Sydney Opera House and the International Space Station. See the full list.

Top off this pie’s toasted cornflake crust and honey-sweetened pudding with juicy plums.

What to Listen To

Five minutes that will make you love Igor Stravinsky.

That’s it for today’s briefing. Thanks for joining me. — Victoria

The latest episode of “The Daily” is about the situation in Tunisia.

Sanam Yar wrote the Arts and Ideas. You can reach Victoria and the team at [email protected].