The transition to Biden’s administration begins.

We’re covering the official start of Biden’s transition period, a planned end to England’s lockdown and a contentious statue of Margaret Thatcher. 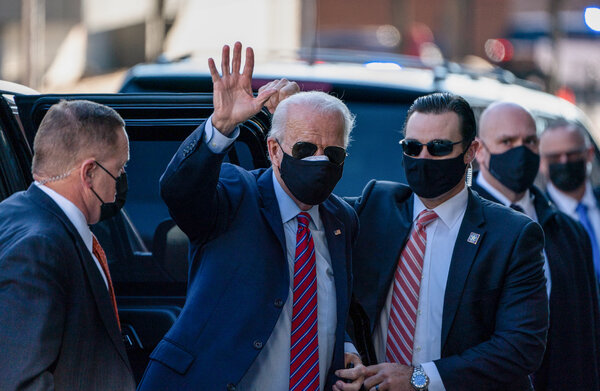 After weeks of delay, Biden’s transition can finally begin

Emily Murphy, the administrator of the General Services Administration, formally designated Joe Biden as the apparent winner of the presidential election, providing federal funds and resources to begin an official transition. Ms. Murphy defended her delay by saying that she did not want to get ahead of the constitutional process of counting votes and picking a president.

President Trump, who has spent more than two weeks claiming falsely that he had won the election and pushing conspiracy theories about fraudulent voting, said on Twitter that he accepted Ms. Murphy’s decision even as he vowed to continue his legal fights challenging the election results.

“Our case STRONGLY continues, we will keep up the good fight, and I believe we will prevail!” Mr. Trump wrote. “Nevertheless, in the best interest of our Country, I am recommending that Emily and her team do what needs to be done with regard to initial protocols, and have told my team to do the same.”

Earlier on Monday, Michigan’s statewide electoral board approved its presidential vote tally, resisting pressure from Mr. Trump to delay the process and paving the way for Mr. Biden to receive the state’s 16 electoral votes. We are tracking the states that have certified their election results.

The president-elect’s picks: Mr. Biden is expected to nominate Janet Yellen, the first woman to lead the Federal Reserve, to be the next Treasury secretary. He plans to name several top national security picks on Tuesday, including the first Latino to lead the Department of Homeland Security and the first woman to head the intelligence community. John Kerry is expected to be his international climate czar, a new cabinet-level position.

A rare burst of good news for Boris Johnson

Buoyed by promising results for a British-led coronavirus vaccine and signs of a slowdown in the infection rate, Prime Minister Boris Johnson of Britain on Monday laid out a plan to lift England’s nationwide lockdown next week, but warned of strict regional restrictions that would last until the spring. The government has yet to announce which regions the curbs will affect.

“We have turned a corner, and the escape route is in sight,” Mr. Johnson said via video from 10 Downing Street, where he continues to isolate after being exposed to a lawmaker who tested positive for the coronavirus. But, he added, “The hard truth is we’re not there yet.”

Analysis: Public health experts warned that a holiday exemption would sow problems later. “It’s a bad idea to ease measures too much before Christmas,” one said. “We will pay for Christmas gatherings with January hospitalizations and February deaths.”

The drugmaker AstraZeneca announced that an early analysis of some of its late-stage clinical trials showed that its vaccine candidate was 70.4 percent effective on average and potentially up to 90 percent effective in preventing Covid-19. It is the third major vaccine developer to announce promising results.

Millions of Italians, including older people and patients with pre-existing conditions, haven’t been able to get a flu vaccine, raising concerns about the country’s ability to run a successful vaccination program against the coronavirus.

More than one million travelers passed through U.S. airports on Sunday, the most on any day since March, in a sign that those flying to visit their families for Thanksgiving could increase the spread of the coronavirus.

The children swept up in France’s dragnet for extremists

In recent weeks, the French police have investigated at least 14 children and teenagers accused of making inappropriate comments during a commemoration for a teacher who was beheaded after showing caricatures of the Prophet Muhammad. Teachers had been given strict instructions to report the slightest inappropriate comment.

As France grapples with a wave of Islamist attacks after the republication of the Charlie Hebdo caricatures, people in and out of the country have criticized the government’s response, which some say risks conflating ordinary French Muslims with people accused of extremism.

Quote: One 10-year-old child wetted himself in his sleep after the raid and said he was now afraid to talk in school. “If I talk,” he said, “there will be the police.”

Former Prime Minister Margaret Thatcher’s 11 years in power in Britain have a complicated legacy. To admirers, she led a much-needed political and economic revolution; to detractors, she left towns that were dependent on state-run industries to rot and turned the country into a society of selfish individualists.

Israeli foreign relations: Israeli news media reported that Prime Minister Benjamin Netanyahu secretly met with Crown Prince Mohammed bin Salman of Saudi Arabia, in what would be the first known meeting between the countries’ leaders. The Saudi foreign minister denied that a meeting had taken place.

Sarkozy trial: Nicolas Sarkozy, the former French president, appeared in court on Monday to face charges of corruption and influence-peddling. He is accused of trying to illegally obtain information from a judge by offering to land him a job.

Joshua Wong: The Hong Kong activist and two other members of the pro-democracy movement pleaded guilty to unauthorized assembly charges over a 2019 protest. They were immediately jailed and will be sentenced next week.

China and the world: China’s top leader, Xi Jinping, is pursuing a strategy to make the country’s economy more self-sufficient while making other countries more dependent on China.

Snapshot: A delegation of five N.B.A. players and officials met privately with Pope Francis to discuss the basketball league’s efforts to addressing social justice and economic inequality. The players offered the pope a book documenting their social initiatives as well as jerseys and a Black Lives Matter T-shirt. “I’m still not even sure if this really happened,” one said.

Anyone for chess?: “The Queen’s Gambit,” a Netflix show about a chess prodigy, has ignited a flurry of enthusiasm and sent chess set sales soaring. “It’s easy enough to be fun to play, but also complex enough to pose a challenge,” a chess federation official said. “It is nerdy, but also cool and fashionable.”

Lives lived: The French Resistance hero Daniel Cordier, who parachuted into his country from exile to run networks of agents and maintain covert radio communications in a cat-and-mouse duel with Hitler’s Gestapo, died last week at 100.

What we’re reading: This Atlantic article on TikTok celebrities and how the app has created a new route to fame. Dani Blum, on the Briefings team, says, “It’s a fascinating look at how tech intersects with teen culture.”

Cook: Turkey cutlets Marsala pair nicely with a mushroom risotto or a pile of rice. They could also be part of your menu if you’re planning a small-scale American Thanksgiving.

Read: Barack Obama’s “A Promised Land” and Ayad Akhtar’s “Homeland Elegies” are among the 10 best books of 2020, chosen by the editors of The Times Book Review.

Watch: “Dolly Parton’s Christmas on the Square,” Netflix’s peppy holiday musical. But be warned, writes our critic: “It’s bad, the sort of bad that knows what it is — campy rather than camp.”

Unwind with our At Home collection of ideas on what to read, cook, watch and do while staying safe at home.

A headline for history

In print journalism, the most momentous events often call for the simplest headlines. MEN WALK ON MOON did not require any great turn of phrase. But which two or three words would declare the winner of the U.S. presidential election atop The New York Times? Our print editors wrote about a debate over a headline that went on for days.

We had to prepare for a wide range of outcomes. In the event of a win by President Trump, we preferred TRUMP PREVAILS — nothing fancy, but it would say a lot in two words.

The Biden options included IT’S BIDEN and BIDEN’S MOMENT. But the consensus was that if Joe Biden won, Mr. Trump’s defeat would be a significant part of the story, as well.

So, the best course, we felt, was to go straight: BIDEN (verb) TRUMP. The next question: Which verb?

“Defeats feels a tad bland,” said Dean Baquet, the executive editor of The Times, later adding, “Ousts feels like a coup.” Some said that “topples” was too close to “ousts.”

What we needed was simple. Powerfully simple. BIDEN BEATS TRUMP. Clear and crisp, a rapid-fire combination of three five-letter words. And it took a dozen journalists only about 25 emails to get there.

That’s it for this briefing. Thanks for starting your day with me.

Thank you
Theodore Kim and Jahaan Singh provided the break from the news. You can reach Natasha and the team at [email protected]

P.S.
• We’re listening to “The Daily.” Our latest episode is about the closure of New York City schools after an initially successful reopening.
• Here’s our Mini Crossword, and a clue: custardy dessert (four letters). You can find all our puzzles here.
• The word “forkable” first appeared in The Times on Monday in this eulogy to leftover stuffing, as noted by the Twitter account @NYT_first_said.
• Ezra Klein, the co-founder of Vox, will become our Opinion section’s newest podcast host and columnist.