We’re covering economic fault lines in Hong Kong being spotlighted by the pandemic, expanding farmer protests in India and a split over the meaning of Australia’s national holiday. 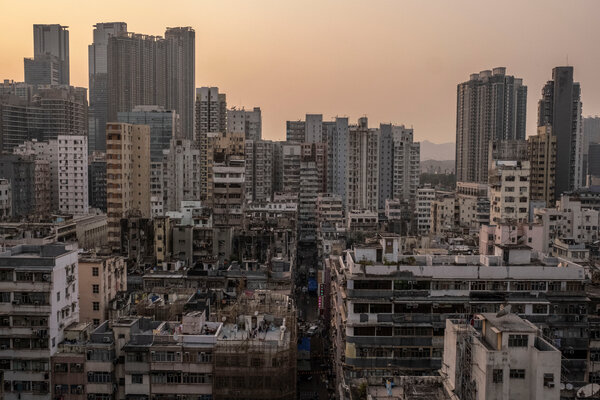 Hong Kong has long been one of the most unequal places on Earth, but the pandemic has brought the divide into the open. Poorer residents who live in extremely crowded quarters have suffered the brunt of the outbreaks and the lockdown.

After an outbreak in the densely populated neighborhood of Jordan, officials locked down 10,000 residents, most of whom live in tenement apartments, where spaces are so tiny and restrictive that they are called cages or coffins. Residents worried about missing a day of work or feared being trapped in poorly ventilated hotbeds of transmission. It was the first such lockdown in the territory since the pandemic began.

Discrimination also compounded the problems. Some blamed the government for allowing the conditions for an outbreak to fester and then imposing measures on a group that can least afford to bear them. Wealthy Hong Kongers have caused outbreaks of their own, without similar consequences.

Details: More than 160 cases were confirmed in Jordan from Jan. 1 to the end of last week, out of about 1,100 citywide. Similar areas saw SARS outbreaks that spread through defective plumbing. The government promised reforms after SARS but has acknowledged that the situation remains perilous.

Around the world, borders are being tightened this week amid rising cases and the threat of more contagious virus variants. France and Britain are considering stricter measures, and New Zealand said borders would remain closed until its population was vaccinated.

Israel’s vaccination push has produced some encouraging news: Early results show a significant drop in infection after just one shot of a two-dose vaccine, and better than expected results after both doses.

Farmers protesting in India vow not to let up

Thousands of farmers poured into New Delhi on Tuesday, using their tractors to pull barricades apart. The police fired tear gas and threw into chaos an event that posed a direct challenge to the government.

It was a split-screen moment, with Prime Minister Narendra Modi saluting officers at a Republic Day parade as clashes broke out in several parts of the city just a few miles away. At least one person died, and our reporters in the area saw wounded people being carried away after a tractor tipped over. As evening fell, many parts of the city still felt unnerved. Farm leaders distanced themselves from the violence and appealed to protesters to return to campsites.

Deadlock: Farmers say they will not back down until the repeal of farming laws aimed at injecting private investment in the agricultural sector, but which farmers say will leave them at the mercy of corporate giants. The demonstration illustrated how deeply the deadlock with the farmers has embarrassed Mr. Modi.

Quotable: “Once we make it inside Delhi, we’re not going anywhere until Modi repeals the law,” said Happy Sharma, a farmer from Uttar Pradesh.

Gang Chen, a professor of mechanical engineering at the Massachusetts Institute of Technology, was arrested during President Donald Trump’s last week in office on suspicion of hiding affiliations with Chinese government institutions in order to secure $19 million in U.S. federal grants.

In the 10 days since Dr. Chen’s arrest, his colleagues have publicly protested, arguing that prosecutors have overreached, blurring the line between disclosure violations and more serious crimes, like espionage or intellectual property theft.

More than 160 members of the M.I.T. faculty have signed a letter arguing that the Chinese affiliations Dr. Chen is accused of hiding were routine academic activities, such as reviewing grant proposals. The university said that $19 million in Chinese funding cited in the complaint was for a collaboration with a Chinese research center, and not for Dr. Chen individually.

Context: Dr. Chen’s prosecution was the latest in the Justice Department’s two-year-old China Initiative, which aims to root out research scientists passing sensitive technology to China.

Sustainability in the fashion industry was once the focus of only a handful of designers, like Stella McCartney and outdoor gear companies such as Patagonia. But brands everywhere are now working to improve a supply chain criticized for contributing to landfills and causing pollution.

We looked at how brands have turned their focus to sustainability by developing new materials and fibers, for example, and how the fashion world could be transformed if customers buy in.

South Korean mayor: A top human rights watchdog in South Korea has released a report confirming that the former mayor of Seoul who was found dead in July had sexually harassed and verbally humiliated a secretary.

Italian government: Prime Minister Giuseppe Conte resigned on Tuesday after weeks of political infighting, thrusting the country into instability during the pandemic. Opposition parties are clamoring for elections, which otherwise would be two years away.

Capitol Hill attack: The Capitol Police apologized for enormous security failures in the Jan. 6 mob attack. The acting police chief acknowledged that her department knew that militia groups and white supremacists would descend on Washington, but did not do enough to prepare.

Snapshot: Above, an Invasion Day protest in Brisbane. Australia is grappling with the legacy of its national holiday, Australia Day, which commemorates the arrival of the British 233 years ago. Tens of thousands, who see the holiday as a celebration of brutal colonization, have marched in protest this week.

What we’re reading: This ranking from Bloomberg of the best and worst places to be during the pandemic, across multiple different metrics. (New Zealand holds the top spot — for now.)

Cook: This recipe for crisped chickpeas in spicy brown butter is your new, 15-minute way to turn a simple can of chickpeas into a satisfying dinner.

Listen: “Ignorance,” a piercing new album by the Canadian musician Tamara Lindeman, who records under the name the Weather Station, explores the emotional impacts of climate change.

Do: It’s time to look inward with the help of movement practices that create healthy bodies and minds.

Immerse yourself in art. At Home has our full collection of ideas on what to read, cook, watch and do while staying safe at home.

For the 125th anniversary of The New York Times Book Review, editors delved into the archives and spotlighted reviews by 25 big-name authors. Here’s a selection.

Tennessee Williams on Paul Bowles in 1949: Mr. Williams, who had won a Pulitzer Prize in 1948 for his play “A Streetcar Named Desire,” reviewed Mr. Bowles’s debut novel, “The Sheltering Sky,” which went on to be acclaimed as one of the best of the 20th century. “A talent of true maturity and sophistication” is how he described Mr. Bowles.

Margaret Atwood on Toni Morrison in 1987: Ms. Atwood — the author of her own classics, like “The Handmaid’s Tale” — wrote: “‘Beloved’ is Toni Morrison’s fifth novel, and another triumph. Indeed, Morrison’s versatility and technical and emotional range appear to know no bounds.”

Jhumpa Lahiri on Mohsin Hamid in 2000: Shortly before she won a Pulitzer Prize for her debut collection of stories, “Interpreter of Maladies,” Ms. Lahiri reviewed the debut novel by Mr. Hamid, who was embarking on his own award-winning career. “Like Fitzgerald, Hamid writes about the slippery ties between the extremely wealthy and those who hover, and generally stumble, in money’s glare,” Ms. Lahiri wrote. “And like Fitzgerald, Hamid probes the vulgarity and violence that lurk beneath a surface of affluence and ease.”

Thank you
Carole Landry helped write this briefing. Theodore Kim and Jahaan Singh provided the break from the news. You can reach the team at [email protected]

P.S.
• We’re listening to “The Daily.” Our latest episode is on Dr. Anthony Fauci.
• Here’s our Mini Crossword, and a clue: Kick back and relax (five letters). You can find all our puzzles here.
• Our national political reporter Astead Herndon spoke to Slate about covering the changing Republican Party in recent years.