We’re covering an abrupt halt to a major Chinese vaccine trial, fury and resignation among Armenians over Nagorno-Karabakh and a fraud scandal in New Zealand’s Bird of the Year contest. 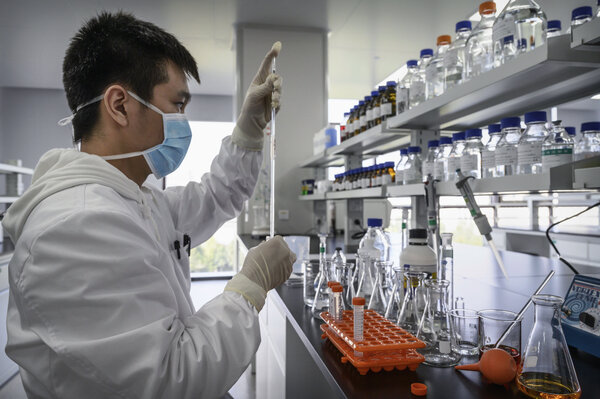 The government said on Monday that it had suspended a late-stage trial of a vaccine from the Chinese company Sinovac, which had been considered a global front-runner, after a “serious adverse” reaction in a participant.

The Brazilian health regulator provided little information on its decision. Dimas Covas, head of the medical center coordinating the trials there, told a Brazilian television network that he found the decision strange “because it’s a death unrelated to the vaccine,” called CoronaVac.

Details: The participant who had the reaction became ill on Oct. 29, according to the authorities. They did not divulge what had happened to the volunteer, citing patient confidentiality. Adverse effects are not unusual in Phase 3 trials.

Context: CoronaVac is one of 11 experimental vaccines currently in Phase 3 trials.

Peter Szijjarto, the Hungarian foreign minister, came to Southeast Asia to promote trade and investment. He tested positive for the coronavirus last week, and at least five people who had contact with him in Thailand and Cambodia have become infected.

President Rodrigo Duterte of the Philippines has named a national police chief who drew public anger this year for violating pandemic restrictions. The officer, Maj. Gen. Debold Sinas, was among 19 people charged after his birthday party was held at the police headquarters in Manila during a lockdown.

Saeb Erekat, a senior Palestinian negotiator who passionately advocated the establishment of an independent Palestinian state, has died after contracting Covid-19. He was 65.

Lockdown, something experienced, dreaded and needed by much of the world in 2020, is the Collins English Dictionary’s word of the year.

Russian peacekeeping forces were deployed to the ethnic Armenian enclave of Nagorno-Karabakh on Tuesday after Armenia and Azerbaijan signed a Russian-brokered deal to end a six-week war that had already killed thousands.

Some Armenians were furious that Nikol Pashinyan, the country’s prime minister, signed the accord, which cedes to Azerbaijan a broad swath of land and several key towns that had been effectively controlled by Armenia since 1994.

Opposition politicians called for his resignation and protesters broke into the Parliament. They also stormed the prime minister’s office.

Russia and Turkey: Russia’s leading role in stopping the fighting shows that Moscow continues to be the most influential player in the southern Caucasus. An Armenian journalist said it was Russia’s decision to send peacekeepers that spared Armenians from more of Nagorno-Karabakh — including Stepanakert — falling under Azerbaijani control. The settlement also sealed a role in the region for Turkey, which had backed Azerbaijan in the war that began in September.

Quotable: “There’s a general sense in the streets that we had no choice, that this was the best alternative to save what was left of Nagorno-Karabakh,” said the director of the Regional Studies Center in Yerevan.

A political coalition led by the 31-year-old son of two former chief ministers was favored to win. A loss for Mr. Modi’s party would be the 10th in the last 12 major state elections and could create a roadblock down the line for his government’s Hindu nationalist agenda.

The campaign: Tejashwi Prasad Yadav of the Rashtriya Janata Dal, or National People’s Party, pledged to create a million new jobs. The youth unemployment rate in Bihar was already at nearly 31 percent, compared to 17 percent nationwide, but the pandemic may have sent it soaring to above 40 percent. The B.J.P.-led coalition had a difficult time countering, even though Mr. Modi campaigned four times in the state.

The Netflix hit “The Queen’s Gambit” has inspired a new a debate about inequality and sexism in chess and what, if anything, can be done about it. Among the more than 1,700 grandmasters worldwide, only 37 are women. Currently, only one woman, Hou Yifan of China, ranks in the Top 100.

But the reality, top players and teachers say, is even worse. “There were opponents who refused to shake hands,” said Judit Polgar, the only woman to ever be ranked in the Top 10 of the game.

Vatican abuse: A highly anticipated report found on Tuesday that Pope John Paul II had rejected explicit warnings about sexual misconduct by Theodore McCarrick as he elevated him to the highest ranks of the church hierarchy.

Hong Kong protest icon: Alexandra Wong, 64, better known as “Grandma Wong,” vanished and returned after months. She said she had been detained by the Chinese authorities and made to pledge she would stop protesting.

New Zealand’s best bird: A hacker slipped more than 1,500 fake votes into the country’s Bird of the Year 2020 contest in favor of the kiwi pukupuku. The scandal has roiled the online community.

Snapshot: Above, The Grounds, in Hong Kong on Tuesday. Hong Kong’s first socially distanced entertainment park opened its doors this week. Live performances and outdoor movies will be offered, in the territory’s latest attempt to adjust to pandemic life.

What we’re watching: This video of a former ballerina with Alzheimer’s, transported by a recording of “Swan Lake.” Tara Parker-Pope, the Well editor, says: “Music holds (and unlocks) so many of our memories.”

Cook: These brussels sprouts with pickled shallots and labneh call for date syrup, available at Middle Eastern grocery stores or online, or pekmez, a type of molasses made from grapes (and sometimes other fruit) used in Turkish cooking.

Read: Here are four story collections that reconsider history and upend tradition, including “Where the Wild Ladies Are” by Aoko Matsuda, which updates a traditional Japanese folk tale for our contemporary world.

Do: It’s not just the Spice Girls and Fleetwood Mac that are having moments. Decades-old movies, songs and video games are surging in popularity. Nostalgia can be a healthy coping mechanism during the pandemic.

Are you free tonight? Scroll through our At Home collection of ideas and decide what you might want to read, cook, watch, and do while staying safe at home.

Subtropical Storm Theta, which formed in the open waters of the Atlantic this week, became the 29th named storm of this year’s hurricane season, surpassing the total count from 2005. Scientists can’t say for sure whether global warming is causing more hurricanes, but they are confident that it’s changing the way storms behave. Here’s how.

Higher winds. There’s a solid scientific consensus that hurricanes are becoming more powerful. Hurricanes are complex, but one of the key factors that determines how strong a given storm ultimately becomes is ocean surface temperature, because warmer water provides more of the energy that fuels storms.

More rain. Warming also increases the amount of water vapor that the atmosphere can hold. In fact, every degree Celsius of warming allows the air to hold about 7 percent more water. That means we can expect future storms to unleash larger amounts of rainfall.

Slower storms. Researchers do not yet know why storms are moving more slowly, but they are. Slower, wetter storms worsen flooding.

Wider-ranging storms. Because warmer water helps fuel hurricanes, climate change is enlarging the zone where hurricanes can form. That could mean more storms making landfall in higher latitudes, like in the United States or Japan.

More volatility. As the climate warms, researchers also say they expect storms to intensify more rapidly. Researchers are still unsure why it’s happening, but the trend appears to be clear.

Thank you
To Theodore Kim and Jahaan Singh for the break from the news. You can reach the team at [email protected]

P.S.
• We’re listening to “The Daily.” Our latest episode is about what went wrong with presidential polling.
• Here’s our Mini Crossword, and a clue: Group of close friends and relatives, in 2020-speak (three letters). You can find all our puzzles here.
• Andrew Higgins, our Moscow bureau chief, will be moving to Warsaw to head up our Eastern Europe bureau. Anton Troianovski will be our next Moscow bureau chief.