HONG KONG — In Hong Kong, a city enveloped in uncertainty, Felix Lee is optimistic about the future. The reason: China.

For many people in Hong Kong, China has caused nothing but alarm. Beijing’s imposition of a national security law this summer to crack down on Hong Kong’s pro-democracy movement undercut the territory’s autonomy and raised concerns that it could lose its status as Asia’s premier financial center.

But Mr. Lee, executive director of UMP Healthcare, a medical services provider, sees opportunity in a closer relationship with the mainland. He launched a project with the local governments in Guangdong Province, across the border from Hong Kong, to upgrade state-run community clinics and train their doctors. In July, he introduced a nurse-training program and a cancer treatment consulting service for mainland Chinese people in Guangdong.

“The integration gives Hong Kong not just the end market, but the very resources that Hong Kong business really needs to meet the future,” he said.

Mr. Lee’s business may offer a window onto where Hong Kong’s economy is headed: toward even greater immersion in, and reliance upon, China. That convergence with the mainland, combined with shifting trade patterns and the geopolitical tumult created by deteriorating U.S.-China relations, could potentially refashion its business environment, economic prospects and even its place in the world.

A smooth transition is by no means assured. The most prominent symbol of both the potential benefits and dangers is the suspended listing of Ant Group, the Chinese fintech giant, which had been set this week to list simultaneously in Hong Kong and Shanghai in what would have been the world’s largest initial public offering.

It was expected to highlight how an ever-wealthier China could boost Hong Kong’s finance industry in its competition with New York and London for premier deals.

Then Shanghai regulators postponed the offering just days before its intended debut. It showed the risks Hong Kong faces by becoming too dependent on often erratic and politically motivated Chinese economic policy, and the possible damage to the city’s own financial sector from Beijing’s interference with its political and legal system.

That interference could end Hong Kong’s long run as a freewheeling crossroads for bankers, executives, journalists and traders. It risks losing the international stature and distinctiveness that has elevated its iconic skyscrapers and equally lofty property prices. Those pressures could further depress an economy already in tatters from pro-democracy protests and the coronavirus.

However, Beijing’s supporters — and a number of business people, like Mr. Lee — believe deeper integration with China will cure what ails Hong Kong. Closer bonds could open new doors for a range of Hong Kong businesses to better capitalize on China’s expanding riches and talent, while helping Hong Kong remain the go-to place for Chinese companies to tap global financial markets.

The two are already tightly tied in everything from trade to tourism to finance. Hong Kong companies have not always felt the benefits, however. Though Hong Kong is part of China, its companies have been treated more like foreign than local firms.

Beijing has been bringing down some barriers. Three years ago, the government introduced the Greater Bay Area initiative, aimed at improving cooperation between Hong Kong, nine cities in China’s Guangdong Province and the nearly gambling haven of Macau, a former Portuguese colony that is now part of China. The program hands Hong Kong companies and residents some helpful perks for doing business in Guangdong, such as personal income tax exemptions and eased regulations on legal services. 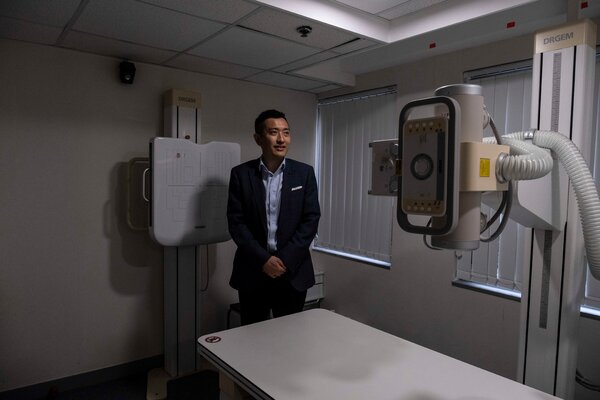 Beijing’s policies “add more muscle” to the integration process, said Catherine Tsang, a partner at accounting firm PricewaterhouseCoopers in Hong Kong. With more regional business, more investors and companies will seek tax advice and other financial services, she added, and “there will be more business opportunities for our company as well.”

More than any specific policy, though, the initiative prodded provincial officials to treat Hong Kong businesspeople less like outsiders.

“Everybody felt that they had to work with Hong Kong, work with companies from Hong Kong,” said UMP’s Mr. Lee.

Hong Kong’s white collar businesses in particular could benefit. In areas like health care, education and accounting, and legal and other professional services, Hong Kong companies retain an edge in experience over their mainland compatriots.

Dennis Lam, chairman of Hong Kong-based C-Mer Eye Care, said the Greater Bay region is his top priority for expansion in China because of its eased regulations as well as its ample demand for health care. The company has four eye hospitals in the area, two in the works and plans for more.

Mixing Hong Kong’s expertise with the ever-larger Chinese market “could be a very happy sort of scenario” Mr. Lam said.

“We still have a good role to play,” he added. ”What we can offer is high-end services. This is what they want, what they need.”

Boosters of closer ties can point to other deals. Hong Kong property giant New World Group is developing a $1.3 billion complex with shops, a hotel and office tower in the city of Shenzhen, across the border from Hong Kong. In terms of floor space, half of New World’s property under development in China is in the Guangdong part of the Greater Bay Area.

Others appear to find the inducements tempting. In a survey of regional businesses released earlier this year, more than half of the respondents from Hong Kong said that they were planning to expand in the Greater Bay region.

Looser barriers could work both ways, however. The presence and role of Chinese companies in the local economy could expand, especially state-owned enterprises, while the number of mainland citizens working and living in Hong Kong will likely also rise.

That will put pressure on Hong Kong people trying to compete. Hong Kong investment bankers are already losing their jobs to rivals from China’s mainland, who frequently have better language and other skills to work with Chinese clients. John Mullally, a Hong Kong-based regional director at recruitment firm Robert Walters, thinks the process is accelerating.

“We’re talking about firms that are pragmatic,” Mr. Mullally added. “They are going to populate their offices with people who are best placed and best capable of the business that is there, which is increasingly China.”

And that may be cause for concern. Some fear Beijing’s encroachment onto Hong Kong threatens its independent judiciary and free flow of information, the core pillars of its economic success, and could make it less attractive to international banks, investors and corporations. Critics of the national security law, designed to eliminate perceived threats to the government, believe it has already curtailed civil liberties in Hong Kong.

Chen Zhiwu, director of the Asia Global Institute at the University of Hong Kong, believes the further erosion of the city’s independent administration and legal system is inevitable with greater control by Beijing, with the result that “Hong Kong will be just one city of many Chinese cities.” That will dilute both Hong Kong’s international standing and edge over the mainland economy, limiting the expansion of its wealth, he said.

“When all this change is done, even though the level of professionalism in Hong Kong is so great, that can only take the economy so far,” Mr. Chen added.

Hong Kong’s future as an economic and business hub could depend on how much Beijing respects its rule of law and free flow of information. Despite the government hard line on dissent, some in the business world believe that Beijing will ultimately uphold these distinctive attributes in a way that lets business continue as it has.

The national security law “will bring back social stability without changing Hong Kong as an open and free society,” said Shan Weijian, chief executive officer of Hong Kong-based investment management firm PAG. As a result, “Hong Kong as an international financial hub will continue to thrive and grow, and grow very strongly,” he said.

In the end, Hong Kong’s connection to mainland China will bolster its appeal, said Yu Pang-chun, convener of a working group at the Hong Kong General Chamber of Commerce focused on the Greater Bay Area.

Hong Kong will remain “the bridge for people who want to go into China internationally, and for the Chinese company that wants to go international,” he said. “That’s been the beauty of Hong Kong for the last few decades. I don’t think it is going to change.”