Yuhui Chai came to the United States from China more than a dozen years ago, drawn by the country’s vibrant democratic values. She eventually found work as a journalist, relishing the chance to pursue hard-hitting stories and ask questions in a manner often discouraged in China’s authoritarian society.

Now Ms. Chai is among more than 100 Chinese news media employees in the United States caught in a heated dispute between Beijing and Washington over the rights of foreign journalists. Unable to secure a long-term visa amid new American restrictions, she has decided to leave her job this week to return to China.

As the United States and China fight a broader geopolitical struggle over trade, technology, military policy, the coronavirus and other issues, the news media from both countries are caught in the middle.

The American government has put new limits on the number of employees at Chinese state media organizations, effectively forcing some to leave, and shortened the length of visas for Chinese media workers. China has expelled 17 foreign journalists, including some from The New York Times, and frozen the credentials of several others.

China in particular has long harassed and surveilled foreign journalists on its soil, but the new round of tit-for-tat restrictions risks cutting off a critical source of insight into both Chinese and American societies. American journalists in China have traditionally provided an important window into the country’s opaque government.

Chinese journalists in the United States, especially those working for commercial outlets, can play a role, too. While the majority of Chinese journalists in the United States work for the Chinese government’s flagship news outlets, including Xinhua and China Central Television, others represent more commercially minded organizations that strive to produce in-depth journalism. Though they have to abide by China’s strict censorship rules, they can help balance out the Communist Party’s propaganda machine back home.

“It has done huge damage to the ideals of freedom of the press and free speech,” said Yik Chan Chin, a lecturer in media and communication studies at the Xi’an Jiaotong-Liverpool University in Suzhou, China. “All these concepts have been significantly damaged during this war.”

Many of the Chinese journalists affected by the new restrictions came to the United States to escape severe controls on the news media in China, where journalists are routinely harassed, punished and imprisoned. Under Xi Jinping, China’s top leader, the government has all but eliminated investigative reporting and demanded media workers show unflinching loyalty to the party.

Now, faced with visa hassles and growing scrutiny of their work in the United States, some are considering changing jobs. Others are making plans to return home, saying in interviews they are tired of being seen as spies and propaganda workers. 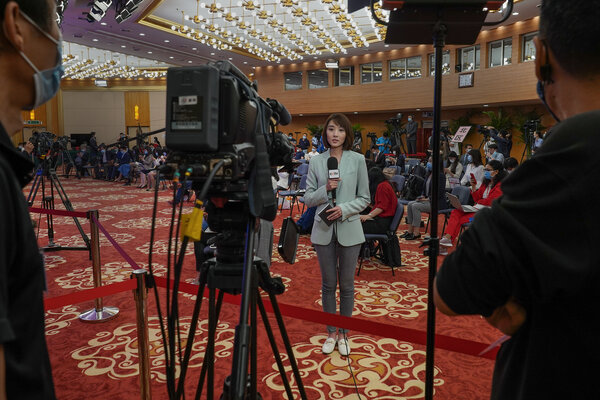 The Trump administration has sought to portray Chinese reporters in the United States as foreign agents, designating nine Chinese news organizations as operatives of the Chinese state. David R. Stilwell, a top State Department official, said in a speech last week that workers at state-run outlets “masquerade as legitimate news reporters when their real business is propaganda and espionage.”

Chinese reporters say that portrayal is too simple. The more commercially minded outlets have somewhat more freedom in what they write or broadcast than official government outlets like Xinhua.

“In this age of great divides, it’s more important than ever to hear from more people,” said Du Chen, a reporter for a Chinese technology news site who left the United States earlier this year and has been unable to obtain a visa to return.

Mr. Du said smaller Chinese outlets in the United States have played an important role in dispelling stereotypes. “It still is very crucial to keep these journalists on the ground in U.S.,” he said, “if the U.S. government prefers a meaningful exchange of ideas rather than propaganda wars.”

In a move seemingly aimed at avoiding an escalation, American officials said this week they would allow Chinese journalists whose visas have expired to remain in the United States and apply to have their stays extended. Many are still awaiting word from the Department of Homeland Security on renewal applications they submitted months ago.

China remains angered by a decision from the Trump administration in May to limit visas for Chinese journalists to 90 days, a significant downgrade from the open-ended visas they used to receive. The Chinese Foreign Ministry this week accused the United States of subjecting Chinese journalists to “political persecution and suppression,” and vowed to take retaliatory measures.

China has already stopped renewing press credentials for several foreign reporters still in the mainland, raising the possibility of further expulsions. State-run news outlets have suggested Beijing could seek to impose limits on foreign journalists working in Hong Kong, a former British colony that has traditionally respected press freedoms, if the situation continues to escalate.

American officials, in response, say the Chinese government has ignored their requests to ease pressure on foreign news outlets. They have called on Chinese officials to reinstate reporters from The Wall Street Journal, The Washington Post and The Times who were expelled earlier this year. The expelled reporters have no ties to government institutions or the Trump administration.

“Beijing’s actions prove time and again that the C.C.P. is afraid of independent and investigative media reporting,” a spokesman for the American embassy in Beijing said in a statement this week, referring to the Chinese Communist Party.

An agreement between the United States and China to ease tensions on the news media, while still elusive, could eventually lay the groundwork for more cooperation between the two countries, experts say.

A compromise could help reduce friction between the two countries at a tense moment, said Jerome A. Cohen, a New York University law professor and an expert on China.

“These steps will set the tone for the series of broader compromises that have to be attempted regarding more major issues,” Mr. Cohen said, pointing to climate change, trade, arms control and other challenges.

For Chinese journalists, the sharp deterioration in relations has been dispiriting.

Many say they have appreciated the chance to report in a relatively free environment on a variety of contentious issues, such as politics, religion and ethnic divisions — subjects that are typically restricted in China.

“I feel myself breathing again in an open society,” said Helen Zhang, a journalist from China who works in the United States. “Chinese journalism is not dead, but homeless.”

Ms. Chai, the reporter for SunTV, said she is considering leaving journalism once she returns to China, in part because of limits on free speech there. She said she worries the United States is isolating itself by making it harder for foreigners to report in the country.

“The United States should be giving positive messages to those who support democracy and freedom, instead of punishing everyone,” she said. “If your policies are driven by fear, driven by a kind of hostility, that creates very big problems.”