The US economy shrank at an annual rate of 4.8% in the first quarter of the year as coronavirus lockdown measures took their toll.

It was the first quarterly decline in GDP for six years and the biggest since the financial crisis in 2008, according to official figures.

But the number only includes the start of the period during which much of the world’s biggest economy has been shut down due to the pandemic – with worse expected to come.

GDP could shrink at a record-breaking rate of 40% in the April-June quarter according to a recent estimate by the Congressional Budget Office. 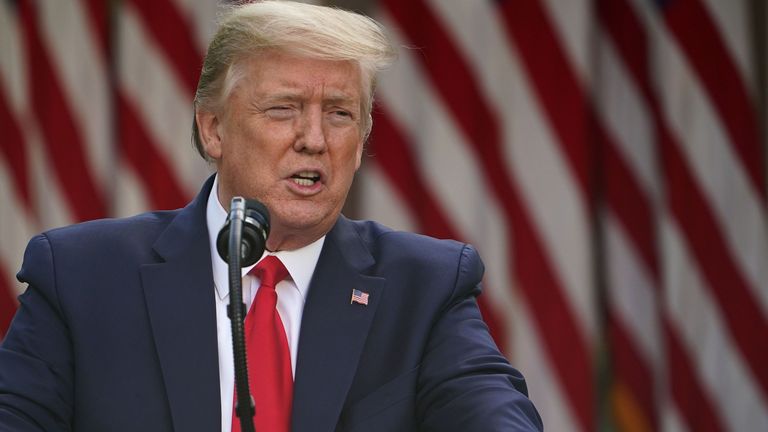 The US bureau of economic analysis, which published the first quarter figures, said: “The decline in first quarter GDP was, in part, due to the response to the spread of COVID-19, as governments issued ‘stay-at-home’ orders in March.

“This led to rapid changes in demand, as businesses and schools switched to remote work or cancelled operations, and consumers cancelled, restricted, or redirected their spending.”

The figures were the latest illustration of the economic calamity created by the pandemic in the US though the Federal Reserve later confirmed its core interest rate would be kept just above zero for the foreseeable future.

Weekly jobs data has shown that more than 26.5 million Americans – one in six of the workforce – registered as unemployed over just five weeks.

With shops and factories closed, home sales falling and consumers slashing spending, America looks to be heading into a severe recession.

Some experts are hoping that a rapid recovery will mean it is a “V-shaped” dip but there is increasingly a concern that the economy will struggle to regain momentum, even after the outbreak has subsided.

That is because some restrictions put persist at local and state level, making it difficult for many businesses to survive, while many Americans could remain worried about travelling and going to restaurants or shops.

There is also a fear that a second flare-up of the pandemic could force businesses to shut down once again.

Donald Trump, who has been building his campaign ahead of this November’s presidential election around his economic record, takes a more optimistic view.

Mr Trump told reporters this week that he expects a “big rise” in GDP in the third quarter, followed by an “incredible fourth quarter, and you’re going to have an incredible next year.”