Leading figures in UK aviation have expressed frustration that the government has still not given backing for Covid-19 testing at airports.

The head of Southampton, Aberdeen and Glasgow airports accused ministers of “overseeing the demise of UK aviation”.

And the bosses of Virgin Atlantic and Heathrow Airport said “leadership” was needed on the testing issue, warning of the huge number of jobs at stake.

The Department for Transport said it had given huge support to the sector.

The aviation industry sees airport testing as a way for passengers to leave quarantine early, and also help the travel industry get back on its feet after lockdown.

Foreign travel was paralysed for several months by the pandemic, with airlines, airports and tour firms shedding thousands of jobs.

Derek Provan, chief executive of AGS Airports, which runs Southampton, Aberdeen and Glasgow, said the sector was seeing more job losses than the demise of the coal industry in the 1980s.

“That’s surely not an accolade any government would like to have,” he said. 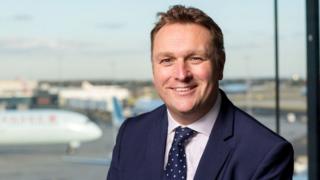 France and Germany are already using testing at airports for passengers arriving from countries with a higher infection rate.

Ministers in the UK have for months been considering whether to back testing at UK airports.

They are said to be looking at a two-test system to reduce the risk of someone who recently contracted the virus giving a “false negative” result.

Under that system two negative results, several days apart, would mean someone would not have to quarantine for the full 14-day period.

“Without free and fast travel with the US, we won’t see a rebound of aviation and this will stall the economic recovery of the UK, which of course is already in recession,” he said.

A pilot project was set up at Heathrow to trial coronavirus testing but it is currently not in operation because the tests have not been endorsed by the government.

With the list of countries on the UK’s quarantine list changing every week, the boss of Heathrow said travellers to and from Britain were facing “quarantine roulette”.

Holidaymakers returning from countries on the UK’s quarantine list are required to self-isolate for 14 days.

Countries are normally added to the list when they record more than 20 cases per 100,000 people in the past week.

Last week, Switzerland, Jamaica and the Czech Republic joined France, Spain and a number of others on the list.

Ministers are expected to decide later whether Portugal and Greece should be added.

Scotland put Greece on its quarantine list following reports of people in the UK testing positive after holidaying on the island of Zakynthos.

John Holland-Kaye said the government needed to change its approach. “I think the government has been very cautious, really focusing on the health crisis and yet we have an unemployment crisis looming.

“The UK government needs to get behind testing as an alternative to quarantine to save millions of jobs in this country,” he said.

The impact of air travel crisis was underlined on Wednesday when Heathrow said it was in talks with unions about pay cuts for about 2,500 staff. The move was needed to protect jobs, the airport said.

Mr Provan said calls for regional travel corridors and testing at airports were falling on deaf ears. “We are not getting any response back from the government.”

And he said that this was causing “huge frustration” across an industry that was already having to shed tens of thousands of jobs.

A spokesman for the Department for Transport said: “We provided unprecedented support to the aviation industry – taking early action on airport slots, loans, tax deferrals, and paying people’s wages through the furlough scheme.

“While protecting public health remains our priority, we are working closely with experts to keep our approach to quarantine under constant review,” the spokesman said.