The worst online shopping experience of Samin Beringer’s life started with a Google search last fall for a pair of Chanel sunglasses. One of her top results was a site called Eyeglassesdepot, which promised to beat the price of any competitor. On Nov. 2, she placed an order with the company for $322.

When the glasses finally arrived, three weeks late, they were the wrong color and, worse, they appeared to be fakes. One giveaway: there was no Chanel box, dust bag or certificate of authenticity.

“I own about 20 pairs of Chanel glasses and these were much lighter and flimsier,” she said in a recent interview. “I didn’t bother to bring them to an expert to verify I was right. I just asked to send them back.”

And so began a weekslong barrage of emails, texts and late-night phone calls from someone identified to her only as Arsenio. He seemed to cycle quickly through the three stages of retail grief, starting with denial (“It’s not supposed to come with a BOX,” he emailed on Dec. 10. “This is not Macy’s”) bargaining (“Why don’t you keep it for $50 off ok?” he wrote the same day) and anger.

The anger erupted soon after Ms. Beringer posted negative comments about Eyeglassesdepot on a consumer review site called Trustpilot. As part of a campaign to bully her into taking down the review, Arsenio sent an email that stated, “This is my final warning to you,” and threatened to file a defamation lawsuit in “NYS Supreme court” if the comments weren’t deleted.

It was Christmas Day.

“I’m a family law attorney and I deal with distraught and emotional people, and very contested issues,” Ms. Beringer said. “I’ve never experienced anything like this in a professional setting, let alone from a guy I was trying to buy sunglasses from.”

While new to Ms. Beringer, this fraught encounter will sound familiar to hundreds of unsuspecting online eyeglass buyers, some of whom made their purchases more than a decade ago. In 2010, these people had chanced across a site called DecorMyEyes, which was operated by a man calling himself Stanley Bolds, who regularly threatened to murder or maim customers who griped that their pricey glasses were cheap knockoffs.

In 2017, buyers from another site, OpticsFast, complained that when they tried to return their counterfeit glasses, they endured grueling harassment from someone identified as Becky S.

Stanley and Becky turned out to be same person, Vitaly Borker, a 6-foot-5 immigrant from Ukraine. I have known about Mr. Borker’s singular approach to online retail since 2010, when he explained his business in a surprisingly candid interview at his home in Sheepshead Bay, Brooklyn. He was arrested a week later, and would serve three and a half years in prison after pleading guilty to fraud and sending threatening communications as the operator of DecorMyEyes.

Once released, he went straight back to work, running OpticsFast, prosecutors said. In 2017, he was arrested and imprisoned again, this time pleading guilty to mail and wire fraud. 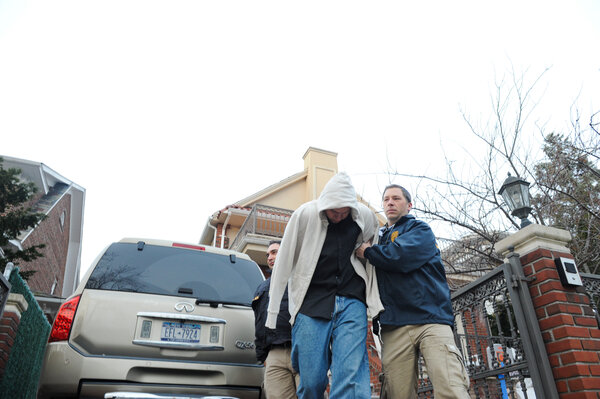 An array of online clues strongly suggests that Mr. Borker, who was released from prison in November 2020, Federal Bureau of Prisons records show, is behind Eyeglassesdepot. None of Eyeglassesdepot’s customers said they were threatened, but at least three were doxxed — that is to say, their names, addresses and credit card information were posted online — by an Eyeglassesdepot representative underneath their complaints about the site.

An email to Eyeglassesdepot was returned by someone identified only as Alex. “I suggest you get your facts right before making false public allegations about this website,” he wrote, without citing any inaccuracies in a detailed note about this article. He declined to comment. A follow-up email asking for Alex’s last name was answered with copy of a contract showing that Alex had purchased Eyeglassesdepot from Vitaly Borker in November 2020. Alex’s last name was inked out on the document.

Mr. Borker’s lawyer, Dominic Amorosa, sent a one-sentence response: “Mr. Borker denies that he is the person identified as Arsenio in your proposed piece.”

One of Eyeglassesdepot’s doxxed customers is Sasha Kuczynski, who in March found the site while looking for a place that could repair her Max Mara glasses. The estimate of $45 sounded appealing, but the odd syntax, misspellings and snippy comments in subsequent correspondence put her off and she emailed to say she would send her glasses elsewhere.

Not so fast, a representative at Eyeglassesdepot replied. The company had already generated a postal label to send her glasses. She owed $9.95. When she declined to send a penny, the representative said Ms. Kuczynski would be reported to a collections agency. Would she, the representative then asked, be willing to set up a phone call with the company’s sales team and chief executive?

“Then the phone rings,” said Ms. Kuczynski, recounting the story recently. “I was so amazed. It was Easter Sunday and this guy had taken time out of his day to harangue me about $9.95.”

Let Us Help You Protect Your Digital Life