Late in the third quarter of a March game between the Utah Jazz and the New Orleans Pelicans, Rudy Gobert, the Jazz’s 7-foot-1 center, caught a pass and slammed down a dunk as the Pelicans’ Josh Hart leapt to contest the shot.

As the two National Basketball Association players jogged back down the court, television viewers could see Mr. Gobert bark out something to Mr. Hart.

“As I was running back on defense, I told him that would be a nice Top Shot Moment right there,” Mr. Gobert said in an interview. Mr. Hart said he had responded with a four-letter word that was not suitable to be printed.

The fleeting interaction showed just how strongly a new cryptocurrency trend — N.B.A. Top Shot — has taken hold. Top Shot, an online marketplace where sports fans can buy and sell video highlights of basketball players, became so popular this spring that the players themselves have joined in, collecting video “Moments” and persuading teammates to buy into the crypto craze. 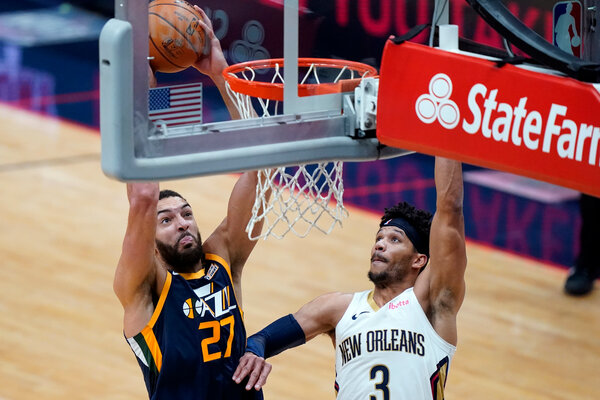 Unlike highlights on ESPN or YouTube, Top Shot Moments are on a blockchain, a digital ledger that records cryptocurrency transactions, which makes it possible for people to own and exchange them as if they were trading cards. A LeBron James reverse windmill dunk Top Shot, for example, sold for $210,000 in March.

Nearly four dozen N.B.A. players have created Top Shot accounts, from All-Stars like Mr. Gobert to journeymen and rookies. Some have collected just a handful of clips, while others own dozens or hundreds.

The trend is an engaging — if expensive — way for fans and players to celebrate exhilarating basketball plays. It’s also a moneymaker for the N.B.A., which lost about $1.5 billion in revenue last season between the pandemic’s emptying arenas and China’s pausing the broadcasting of basketball games over a geopolitical dispute.

The N.B.A. has long been one of the most innovative leagues in finding ways to make money. It finished its 2019-20 season in a Disney World bubble and squeezed in a condensed All-Star Weekend in March to recoup some lost revenue. But with arenas only now slowly filling, Adam Silver, the N.B.A. commissioner, recently told Time magazine that the league would still miss out on 30 percent to 35 percent of revenue this season.

Top Shot is one small way to help close that gap.

Part of a larger online frenzy for cryptocurrency and NFTs — or nonfungible tokens — Top Shot’s marketplace has generated $589 million in sales since it opened in October, according to Dapper Labs, the company working with the N.B.A. to produce the viral trend.

Dapper and the league make money through the sale of the digital Moments, which are given serial numbers and released in occasional “drops” that draw tens of thousands of people hoping for a chance to buy digital packs of Moments. Dapper and the N.B.A. also share in a 5 percent cut of the profit whenever a Moment is resold.

The N.B.A. declined to say how much money it has made through this arrangement, but Roham Gharegozlou, the Dapper founder and chief executive, said his company had made $45 million from pack sales alone. Players also earn money for being featured in the video highlights, but the National Basketball Players Association declined to say how much.

In the past, dozens of N.B.A. players blew their millions on risky investments, but the league has pushed in recent years for its young stars to educate themselves financially.

Top Shot is risky, too, because the price of the highlights could plummet at any time if people decide they are no longer interested. One warning sign: Top Shot’s sales last month, $82 million, were down from $208 million in March and $224 million in February, according to CryptoSlam, an NFT tracker. Dapper said that the marketplace was still growing, and that April’s numbers were more normal after a brief NFT boom.

“It’s a marketplace that obviously is purely built on demand and scarcity,” said Darren Heitner, a lawyer and a sports law professor at the University of Florida. Between shifting interests and the ebbing of the pandemic, he said, “there’s a lot of reasons you could see this marketplace drying up and find individuals left holding the bag.”

Is buying Top Shot Moments, then, yet another wasteful investment? Or could it be a shrewd financial play?

Some players were attracted to Top Shot by the allure of owning the biggest and rarest collections, but many say they have grown to believe in cryptocurrencies and think Top Shot highlights could accrue value in years to come.

Mr. Gobert said he thought Top Shot had “unlimited potential” because the marketplace could draw on vintage highlights, current plays and future clips, and because Moments of young players could gain value as they blossomed into stars.

He said he had tried to buy highlights of himself and his teammates, betting that the Jazz will make a splash in the playoffs and that those Moments will be worth more money.

For the wealthiest players, Mr. Heitner said, there is little risk in investing even a large amount of money in Top Shot. Mr. Gobert, for example, will make $205 million over the next five years.

“I’m much less concerned about someone like LeBron James pumping in hundreds of thousands of dollars into N.B.A. Top Shot than I am with the minimum-salary players doing the same,” Mr. Heitner said.

Players with reputations for financial savvy, like Andre Iguodala and Kevin Durant, have invested in Dapper, which was valued at $2.6 billion in a recent funding round. In April, The Information reported that Dapper was raising another round that would value it at more than $7.5 billion.

Mr. Iguodala, who plays for the Miami Heat, said he thought sports-related memorabilia, even in a volatile industry like NFTs, was a safe bet. For instance, he said, “Michael Jordan will always be considered one of the greatest of all time, so his shoes will stand the test of time.”

Others, like Terrence Ross of the Orlando Magic, got into Top Shot for the fun of it. He now believes in its longevity, he said, and has invested in Dapper.

“Right now, I’m just riding the wave, and we’re going to see where it stops,” said Mr. Ross, who said Top Shot reminded him of collecting trading cards when he was a child. He often streams live on YouTube while opening Top Shot packs.

Of course, it’s still the N.B.A., and the fraternity of Top Shot aficionados engages in plenty of antics and inside jokes.

In the locker room and on team plane rides, Mr. Ross and teammates Cole Anthony and Michael Carter-Williams answer questions from curious coaches and debate which vintage basketball play would make the best Top Shot.

“We’re making jokes, like, in-game,” Mr. Ross said. In a game against the Washington Wizards, for instance, Mr. Ross had an impressive dunk, and Mr. Carter-Williams told him as they ran back down the court that he hoped it would become a Top Shot.

In San Francisco, the Golden State Warriors guard Damion Lee — also a Dapper investor — is trying to start a new tradition: having players swap Moments instead of jerseys after games.

The king of Top Shot, though, is a Sacramento King: the rookie guard Tyrese Haliburton.

Bored one day in February, Mr. Haliburton checked Top Shot and saw the value of a Moment featuring him had grown by $600. He posted about it on Twitter and immediately saw another spike, piquing his interest.

“From there on, I was full go with Top Shot,” said Mr. Haliburton, who owns 163 Moments and has spent months exhorting other players to get involved.

During one postgame interview, he even urged Sacramento journalists to pool their money to buy a $10,000 highlight of his 6-foot-4 teammate Buddy Hield dunking over 7-foot Mitchell Robinson of the New York Knicks.

“There’s only 50 in existence, and you will never see Buddy do that again,” he said. They laughed at the advice; Mr. Haliburton, who makes $3.8 million this season, clearly did not know how little journalists earn, they said.

Mr. Haliburton, who also invested in Dapper recently, has persuaded at least four other Kings to join Top Shot, including Harrison Barnes, who was “hooked.”

After Mr. Barnes hit the winning shot against the Cleveland Cavaliers, Mr. Haliburton interrupted Mr. Barnes’s postgame interview, dumped water on him and shouted, “Put that on Top Shot!”

Mr. Barnes, the secretary-treasurer of the players association, is another veteran with a reputation for financial smarts. He owns 242 Top Shot Moments, the most of any player.

Mr. Haliburton thinks the Top Shot bets will pay off.

“I have a real belief that this is the future of our world,” he said. “I’m just going to keep collecting.”