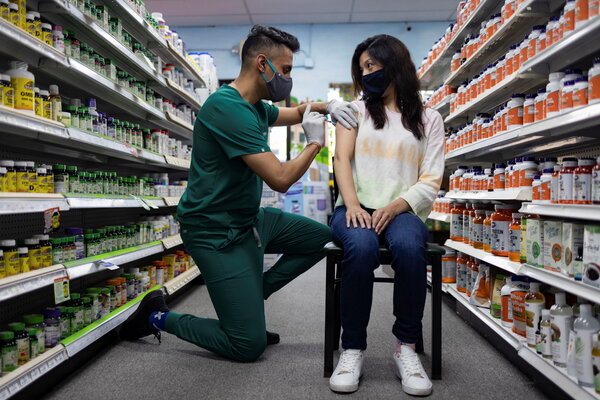 The F.D.A. granted full approval to the Pfizer-BioNTech coronavirus shots for people 16 and older yesterday, the fastest vaccine approval in the agency’s history. (Although, perhaps, not fast enough.) President Biden seized on the moment. “If you’re a business leader, a nonprofit leader, a state or local leader, who has been waiting for full F.D.A. approval to require vaccinations, I call on you now to do that,” he said. “Require it.”

It gives companies more cover to impose vaccine mandates and industry groups more ground to lobby local authorities. Some states have moved to outlaw vaccine mandates. Arizona’s governor, for example, issued an order outlawing coronavirus vaccination as a requirement for employment. Those actions made it difficult for companies with large national footprints to impose blanket mandates. While some have pushed back, like Norwegian Cruise Line in Florida, most have stayed out of the fray.

“Many companies have made the decision to mandate vaccines for some or all of their employees, and we applaud their decision,” the Business Roundtable said in a statement. “We also encourage policymakers, including at the state and local levels, to support — not impede — companies’ ability to make such a decision.”

More public sector employers are introducing mandates, easing the way for private employers to make similar moves. New York City said it would require all 148,000 employees of the city’s Education Department to be vaccinated. The Pentagon is demanding that its 1.4 million service members receive the shot by the middle of next month.

Some of the latest corporate mandates:

Chevron is mandating vaccines for expats and for employees who travel internationally, as well as for the offshore work force in the Gulf of Mexico and for some onshore support personnel.

CVS Health says its pharmacists have until Nov. 30 to be fully vaccinated, while others who interact with patients, and all corporate staff, have until Oct. 31. The mandate covers about 100,000 employees.

Disney World said unions representing more than 30,000 employees had agreed to a mandate, citing the F.D.A.’s full approval, that would require workers to be vaccinated by Oct. 22.

Mandates may be the only way to significantly increase vaccination rates, given continued hesitancy about the shot. A recent poll found that three out of 10 unvaccinated people said that they would be more likely to get a fully approved F.D.A. shot, though some experts believe that this figure could be exaggerated.

More regulatory action is coming. Moderna’s application for full approval of its vaccine was filed in June, a month after Pfizer. Johnson & Johnson is expected to apply for full approval soon. And the F.D.A. is also weighing whether to authorize booster shots for the fully vaccinated, another twist for corporate vaccine mandates.

House leaders delay a vote on Biden’s budget priorities. Plans for a vote yesterday on a $3.5 trillion budget blueprint were scrapped, as centrist Democrats demanded that the $1 trillion bipartisan infrastructure plan was approved first. Wall Street analysts are telling clients to prepare for both measures to pass — eventually.

Commodity prices are moderating, reducing inflation concerns. The decline in iron, oil, copper and other commodities from recent highs gives the Fed and other policymakers more room to operate. That is helping the Biden administration make the case that its spending plans won’t push inflation higher.

The S.E.C. issues new requirements for Chinese companies listing in the U.S. Some Chinese companies have reportedly begun receiving requests for more detailed disclosures about their use of offshore vehicles in I.P.O.s. That follows a recent call from Gary Gensler, the S.E.C. chairman, for a “pause” in Chinese listings on U.S. exchanges.

Walmart begins delivering goods for other retailers. The new service, Walmart GoLocal, is an effort to leverage the retail giant’s reach and to diversify its revenue streams. It will also make Walmart look more like its biggest online rival, Amazon.

A Korean law challenges the White House’s policy on Big Tech. Apple and Google are asking the U.S. government for help fighting a law in South Korea that the companies say would unfairly harm their app stores. The law, expected to face a crucial vote this week, is a test for the Biden administration, which must balance defending American companies’ interests abroad with its push to rein in their power at home.

Checking in on hedge fund performance

Hedge funds have trailed the market for many months. Part of the reason is that their favorite stocks, as measured by a Goldman Sachs index of the most heavily owned shares, have risen just 4 percent in the past six months, versus 16 percent for the S&P 500.

Hedge funds were caught off guard by Beijing’s corporate crackdown. Asian stocks, especially ones exposed to China’s rapidly growing economy, have long been favorites of hedge funds, which search for higher-than-average returns to justify their higher-than-average fees. But Beijing’s recent crackdown on its largest tech companies, particularly those with U.S. listings, has hit those bets hard.

Goldman says that about a third of the funds it surveys had an investment in foreign-listed shares of Chinese companies at the end of June, the highest percentage it has ever measured. Alibaba, a top holding of many hedge funds, has slumped nearly 30 percent since the end of June.

Hedge funds also doubled-down on pandemic plays, loading up on investments in companies that benefited from pandemic lockdowns but underperformed recently as the economy reopened.

For instance, hedge funds collectively own more shares in Amazon than they did a year ago, according to Bank of America. Peloton also recently became one of the stocks most widely held by hedge funds.

The outlook: With Covid cases on the rise, however, betting on another pandemic-related slowdown or on a return to more strict social distancing looks smarter by the day. And Chinese shares have fallen so far that bargain hunters are jumping in, lifting stocks from historic lows in recent trading. What’s more, the biggest hedge funds don’t appear to have any trouble raising money as investors keep the faith that their strategies will pay off whatever the prevailing market conditions.

“There was already a higher bar before Theranos because we don’t fit the pattern. This just makes it that much harder.”

— Falon Fatemi, co-founder of the tech companies Fireside and Node, on how the collapse of Theranos, the blood-testing start-up led by Elizabeth Holmes, has made it harder for firms led by women to attract investors.

The gig economy hits a glitch

A California judge on Friday ruled that a law in the state classifying many gig workers as independent contractors, known as Prop. 22, was unconstitutional and unenforceable. Here are answers to questions you may have about the decision. (You can find more detailed explanations here.)

Understand Vaccine and Mask Mandates in the U.S.