The nation’s two most powerful economic policy officials testified together for the first time, reviewing the state of the economic recovery. 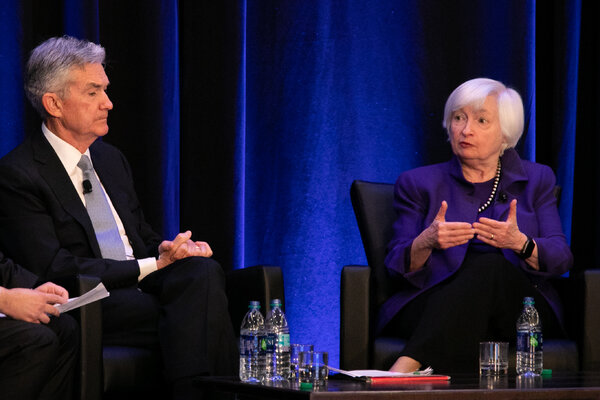 By Jeanna Smialek and Alan Rappeport

The economy is healing, the nation's top two economic officials told lawmakers on Tuesday, but workers and businesses will need continued government support to rebound from the pandemic — and one of the officials, Jerome H. Powell, the Federal Reserve chair, batted back concerns that vigorous policy help could stoke inflation.

Mr. Powell testified Tuesday before the House Financial Services committee alongside Janet L. Yellen, his predecessor at the Fed and now the Treasury secretary, in their first side-by-side appearance in their current roles. In hopes of fueling a rapid rebound in spending and hiring, the government has been spending aggressively and the Fed is keeping borrowing costs at rock bottom.

That all-in approach has helped to avert the most dire potential economic outcomes, Mr. Powell told lawmakers, and it has not created grave inflation risks in the process.

Asked whether President Biden’s recently passed $1.9 trillion spending package to combat the virus could cause prices to shoot higher — especially as the administration eyes plans to spend as much as $3 trillion more on an infrastructure package — Mr. Powell said the Fed did not fear a jump in inflation.

“We do expect that inflation will move up over the course of this year,” he said, adding that some of the rise would be procedural as low readings from March and April of last year dropped out of the data, and part of it might be driven by a recovery in demand.

“Our best view is that the effect on inflation will be neither particularly large nor persistent,” he said. And if it does pick up in a more concerning way, “we have the tools to deal with that,” he added.