Fuel sales could be rationed and forecourt opening hours limited to try and tackle panic buying under the government’s emergency plans for dealing with fuel crises.

Capping the amount of petrol and diesel that can be bought by each customer, and restricting the hours pumps can operate, are among a number of measures to manage supply and demand set out in the National Emergency Plan for Fuel (NEPF).

The plan lists 10 measures, three of which have already been activated in response to the fuel shortage and ongoing supply chain squeeze across the economy. 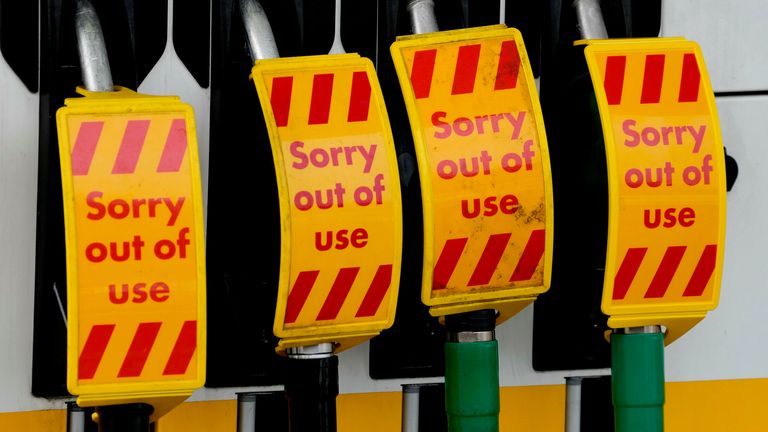 First published in 2011 and updated at the start of last year, the NEPF also gives government the power to designate certain filling stations for “emergency and critical service vehicles”, which might include the private cars of key workers.

In the fuel crisis of 2000, caused by HGV drivers blockading refineries and fuel terminals in protest at rising costs, NHS and other specified workers were given priority access to petrol stations.

Oil companies and fuel distributors can be instructed to prioritise key bulk deliveries to the emergency services, utilities, public transport and key supply chains such as food and health.

And crude oil and other imports can also be allocated by government to refineries rather than distributed freely by the market.

The NEPF also sets out measures to maintain supply, which the industry insists is not the problem at the heart of the current shortages.

Three of these have already been activated.

On Sunday Business Secretary Kwasi Kwarteng suspended the Downstream Oil Industry Protocol, the element of the Competition Act that prevents oil companies and fuel distributors from working together.

This allows companies to share information and plan together to ensure what supplies there are coordinated and spread across the country.

The army has also been put on stand-by to provide around 75 qualified HGV drivers to assist with deliveries if required, a measure allowed for under the NEPF.

The NEPF says the government also has access to a reserve tanker fleet that can be deployed at short notice.

Restrictions on driver’s daily hours can also be lifted, which has already happened for general HGV drivers, who can now run for an extra hour each day in response to the supply chain squeeze.

Finally the UK could release some of the emergency oil stocks it is obliged to hold, though the NEPF says this would only happen “in the event of significant disruption to global supply”.

Government and industry say the current forecourt shortages are entirely the product of consumer behaviour, following news that BP and other companies have warned government they were considering rationing deliveries because of a shortage of HGV drivers.

Ministers have urged the public to buy fuel “normally” after a massive surge in demand caused lengthy queues at garages and has seen many run dry.