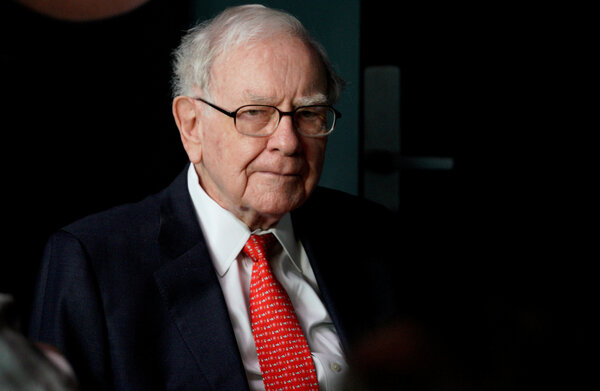 Warren Buffett is playing it safe

Berkshire Hathaway’s latest annual results, and the accompanying letter to investors from the Oracle of Omaha, reveal a clear theme: Warren Buffett isn’t taking as many risks — or big swings at deal-making — as he used to.

Berkshire is spending more of its $138 billion in cash on smaller investments, as opposed to deploying it on the huge acquisitions that he famously made in the past. The conglomerate bought back nearly $25 billion of its own shares last year, a record for a company that until recently was reluctant to spend its cash this way.

Mr. Buffett sang the praises of buybacks — at Berkshire and at the companies it invests in — writing, “As a sultry Mae West assured us: ‘Too much of a good thing can be … wonderful.’”

Mr. Buffett admitted a big mistake in his last foray into blockbuster deal-making. He wrote that the $37 billion he paid for Precision Castparts, a maker of airplane parts, was too much. (The 2016 transaction resulted in a $10 billion write-down last year.) “No one misled me in any way,” he wrote. “I was simply too optimistic.”

Berkshire reported a fall of nearly 50 percent in its net profit last year, although operating profit was down by less than 10 percent.

Berkshire’s biggest bets don’t look particularly contrarian. They include a $120 billion stake in Apple and majority stakes in the Burlington Northern railroad and Berkshire Hathaway Energy. Berkshire’s stock is up but has underperformed the S&P 500 in recent years.

Mr. Buffett isn’t bullish on bonds, writing that bond investors face a “bleak future” amid signs of anxiety in the debt markets, and he warned that “risky loans” and other ways to juice fixed-income returns would lead to ruin.

Investors don’t seem to mind that Mr. Buffett has put down his so-called elephant gun for big acquisitions, at least for now. “He doesn’t really have to find the elephant because he has two elephants already corralled that need to be fed,” said Thomas Russo, a Berkshire shareholder, referring to the railroad and energy companies. That suggests investors are on board with Berkshire focusing on buybacks and its existing businesses rather than bold new bets — for now.

Senate Democrats will drop a minimum wage increase from the stimulus bill. The move came after the Senate parliamentarian ruled that increasing the federal rate to $15 an hour broke the chamber’s rules, The Wall Street Journal reports. The House, which had approved the wage increase in its version of the $1.9 trillion bill, must sign off on the change.

The F.D.A. approves Johnson & Johnson’s Covid-19 vaccine. The one-shot treatment is the latest to win emergency approval, as the decline in new coronavirus cases appears to have plateaued. But supplies of J.&J.’s vaccine will be limited at first.

President Biden won’t sanction Saudi Arabia’s No. 2 leader over Jamal Khashoggi’s murder. The decision not to punish the country’s crown prince, Mohammed bin Salman, over his approval of Mr. Khashoggi’s killing in 2018 was the latest sign that there are limited consequences for the act.

Nasdaq presses forward with its board diversity proposal. The stock exchange’s plan to require companies listed on its market to have more diverse directors has overwhelming public support, it told the S.E.C. Nasdaq is making some tweaks, including giving companies a one-year grace period and offering more flexibility to companies with smaller boards.

What’s next for WeWork?

SoftBank said on Friday that it had settled its legal dispute with Adam Neumann, opening the way for WeWork to go public just 16 months after SoftBank rescued it from collapse, The Times’s Peter Eavis reports.

A recap: At the time of its rescue, SoftBank offered to buy $3 billion of stock from WeWork shareholders, including the co-founder Mr. Neumann, who stepped down as C.E.O. during the company’s disastrous I.P.O. attempt in 2019. Then, as the coronavirus was emptying WeWork offices, SoftBank said in April that it wouldn’t go ahead with the purchase, prompting Mr. Neumann to sue.

Who came out ahead in the settlement?

SoftBank is now spending only $1.5 billion on the stock, instead of $3 billion, according to two people with knowledge of the settlement. But the lower bill is because SoftBank is cutting the number of shares it will buy in half; that means Mr. Neumann will get $480 million instead of up to $960 million. (SoftBank has invested well over $10 billion in WeWork.)

Mr. Neumann also secured some concessions, according to these people. SoftBank pledged to pay $50 million for his legal fees, to extend a $430 million loan it made to him by five years and to pay the last $50 million of a $185 million consulting fee it owed him.

Now what? Settling the dispute removes a big obstacle to taking WeWork public. SoftBank has been in talks to merge with BowX Acquisition, a SPAC run by Vivek Ranadivé, the founder of Tibco Software and owner of the N.B.A.’s Sacramento Kings. Such a deal would raise some crucial questions:

SoftBank owns 70 percent of WeWork’s shares but has direct control over just under half of shareholder votes. Would those numbers change after an offering? Who does control WeWork?

Would investors balk at WeWork’s financial performance, again? It’s not clear how the company has performed recently; it last publicly disclosed its financials some 18 months ago. And a glut of office space is coming, which might be more attractive to companies than taking WeWork space. Individuals, meanwhile, may be less likely to use a co-working space now that they’ve gotten used to working from home.

The state of consumer spending is a theme, with a wide range of retailers reporting earnings, including Kohl’s, Nordstrom and Target on Tuesday; Dollar Tree on Wednesday; and Costco and Gap on Thursday.

In other earnings news, later today Zoom is expected to release another blockbuster report, but executives will be quizzed on whether the company’s growth can continue when many workers return to the office.

The annual meeting of the National People’s Congress of China begins on Friday, where the country’s latest five-year economic plan will be announced, among other measures.

The latest U.S. jobs report is released on Friday, with economists expecting a gain of 165,000 jobs in February, up from 49,000 the previous month.

Citi may face a shareholder vote on a racial equity audit

Citigroup has no legal basis for blocking an investor proposal demanding a report on how its practices affect minority communities , the S.E.C. ruled Friday. That increases the likelihood that the bank’s board will have to examine itself in the glare of the public.

Citi had asked the S.E.C. for permission to keep the proposal off its annual shareholder proxy. DealBook first reported last year that two investment groups linked to unions, the CtW and SEIU, would call on the country’s six largest banks to conduct “racial equity audits.” The unions asked them to work with civil rights groups, employees and customers on examinations of practices that would then be made public.

In its submission to the S.E.C., Citi said it had already “substantially implemented the essential elements” of the proposal. But Dieter Waizenegger, the executive director of CtW Investment Group, told DealBook, “It’s important to establish an independent assessment” of the banks’ practices.

Citi could face a legal fight if it chooses to ignore the proposal, after the commission refused to give the firm cover. A spokeswoman for the bank noted in a statement that it has committed more than $1 billion to help Black homeowners and entrepreneurs, as well as to better diversify its work force. “Citi is acutely focused on addressing racial inequity, especially in terms of the wealth gap it creates,” she added.

A warning for ‘reckless’ buyouts

Until recently, those who sold companies to private equity firms were not held liable if things went awry after the sale — that, after all, was the new owner’s problem. Those days may be over, Bill Cohan writes for Times Opinion.

Officers and directors can be held responsible for approving a “reckless” sale, a New York federal court judge concluded in December. Jones Group, the struggling apparel company that owned Nine West and Stuart Weitzman, sold itself to Sycamore Partners in 2013. The buyout firm later changed the terms of the deal and the company’s debt exceeded bankers’ recommendations. Nine West filed for bankruptcy in 2018 and shareholders sued the Jones Group’s former directors. There is still a trial looming, but would-be sellers “had better think twice before agreeing to sell a company to a buyout firm,” Mr. Cohan wrote.

In a message to clients, the law firm Ropes & Gray wrote that the ruling was “a serious warning,” noting that even though the selling directors may not be involved after an exit, they “cannot ignore” a company’s post-exit balance sheet.

If a precedent is set, private equity firms could suffer, Mr. Cohan suggested: “The days of just selling a company to the highest bidder regardless of the consequences — the legal standard on Wall Street since the Delaware Supreme Court decided the so-called Revlon case in 1986 — might just be over.”

Or not: lawyers at Fried Frank believe the broader implications of the case are “overstated,” noting that the facts of this case raised specific “red flags.”

For more on the prospects for private equity deal-making, Bain’s latest annual report on the state of the industry is out today. “A number of headwinds will make for a uniquely challenging recovery,” it writes.

Robinhood reportedly plans to file confidentially for an I.P.O. as soon as this month. (Bloomberg)

Retail investors in the SPAC that plans to merge with the electric carmaker Lucid are trying to rally support for its depressed shares on Reddit forums. (Business Insider)

Gov. Andrew Cuomo of New York offered an apology for “insensitive” comments after a second former aide accused him of sexual harassment; he faces an independent investigation. (NYT)

China is charging ahead with a national digital currency, rethinking how government-backed money works. (NYT)

Best of the rest

McDonald’s C.E.O. pledged support for women who have raised allegations of sexual discrimination and harassment at the fast-food chain. (McDonald’s, CBS News)

We’d like your feedback! Please email thoughts and suggestions to [email protected]