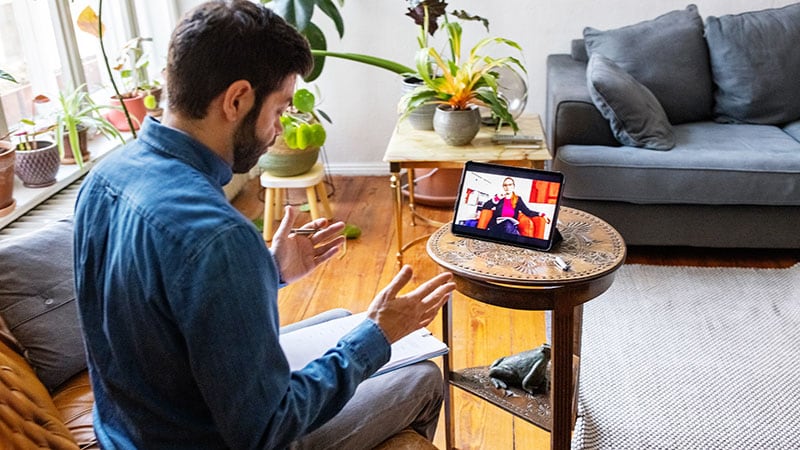 Telehealth is safe and effective for the treatment of borderline personality disorder (BPD) and may even have an edge over in-person treatment, new research suggests.

Investigators compared BPD outcomes with therapy delivered in-person and via telemedicine and found comparable reductions in depression, anxiety, and anger symptoms as well as improved overall well-being and mental health.

The study was published online today in the Journal of Personality Disorders.

Most previous research investigating telehealth has occurred in outpatient, individual treatment settings and has not examined telehealth-delivered group therapy or partial hospitalization, the authors note.

“Until the pandemic, we were delivering care in person, but when the pandemic began, because of public safety recommendations, we knew that we could no longer continue doing so,” said Zimmerman, who is also director of the Outpatient Division at the Partial Hospital Program, Rhode Island Hospital.

“In switching to a telehealth platform, we were concerned about patient safety and acceptability of delivering care in that manner, especially with patients with BPD, which is associated with impulsive behavior, self-harm, and suicidal behavior, among other problems,” he said. However “we had no other option” than to utilize a telehealth delivery mode, since the alternative was to shut down the program.

The investigators were “interested in whether or not virtual treatment in an acute intensive setting, such as a PHP, would be as safe, acceptable, and effective as in-person treatment.”

The study was part of the ongoing work of the Rhode Island Methods to Improve Diagnostic Assessment and Services.

Treatment, consisting of an Acceptance and Commitment Therapy (ACT) treatment model — including intake assessments, individual therapy, psychiatric visits, and group therapy — was delivered by a multidisciplinary team via Zoom.

Zimmerman noted that the team implemented additional safety precautions, including having patients check in at the beginning of each day to indicate their location, not seeing patients who were out of state, and making sure all patients had a contact person.

Additionally, beyond the therapist leading the group, another therapist was always available, overseeing groups and meeting one-on-one (virtually) with participants if they had been triggered by the group process and were highly distressed.

Patients were asked to complete a number of questionnaires, including the Clinically Useful Patient Satisfaction Scale (CUPSS) at the end of their intake session. The primary outcome measure was the Remission from Depression Questionnaire (RDQ-M).

The study was conducted between May 1 and December 15 of 2020 and included 64 patients with BPD who were treated for the first time in the Rhode Island Hospital partial hospital program. They were compared to 117 patients who participated in the in-person program during the same months in 2019.

Participant characteristics were similar — for example, both groups were roughly three quarters female, with a mean age of approximately 34 years.

Upon completion of the program, 100% of the in-person and 95.4% of the telehealth group indicated that they were “very” or “extremely” satisfied (c2= 4.62), and “under both telehealth and in-person treatment conditions, the patients significantly improved from admission to discharge on each of the RDQ-M subscales, with large effect sizes found for most of the subscales,” the authors report.

A nonsignificantly higher proportion of patients completed the telehealth program, vs the in-person program (68.8% vs 59%, c2 = 1.69).

In both programs, transfer to inpatient care and dissatisfaction-related withdrawal from the program were low (both < 2%). Notably, no patients attempted or completed suicide during treatment.

Virtual treatment is more convenient than in-person treatment, Zimmerman noted. “Some patients — generally those with medical or transportation issues — told us they otherwise would not have been able to participate [in the program] if treatment had been in person.”

He added, “My prediction is that 5 years from now, two thirds to three quarters of outpatient visits will be virtual because that is what the patients prefer — and although there will certainly be individuals who prefer in-person care, I think we’ve witnessed a sea change in how behavioral healthcare will be delivered.”

Commenting for Medscape Medical News, Monica Carsky, PhD, clinical assistant professor of psychology in psychiatry and a senior fellow at the Personality Disorders Institute, Weill Cornell Medical College, New York City, said the study has “a lot of valuable detail about how to set up a virtual PHP, which could guide any group wanting to try this.”

Carsky, who was not involved with the study, called it “a very important contribution to the research literature on efficacious treatment of BPD,” although it is not a randomized controlled trial.

“Adding more individual attention to the virtual group (eg, having a co-host in the groups) seems as though it may be an important factor in dealing with the limitations of virtual treatment,” she noted.

However, she continued, “a limitation is that outcome assessment relied on self-administered questionnaires and did not include clinician rating scales, so the response may have been subject to the effects of social desirability bias.”

Also commenting for Medscape Medical News, Donald W. Black, MD, associate chief of staff for mental health at the Iowa City Veterans Administration Hospital, said the pandemic has been a “game changer, as we have had to quickly adapt mental health programs to a virtual format.”

“For the most part, they have been remarkably successful for a variety of conditions, and Zimmerman and colleagues now show this for BPD families,” said Black, who was not associated with the research.

No study funding was listed. The study authors, Carsky, and Black have disclosed no relevant financial relationships.