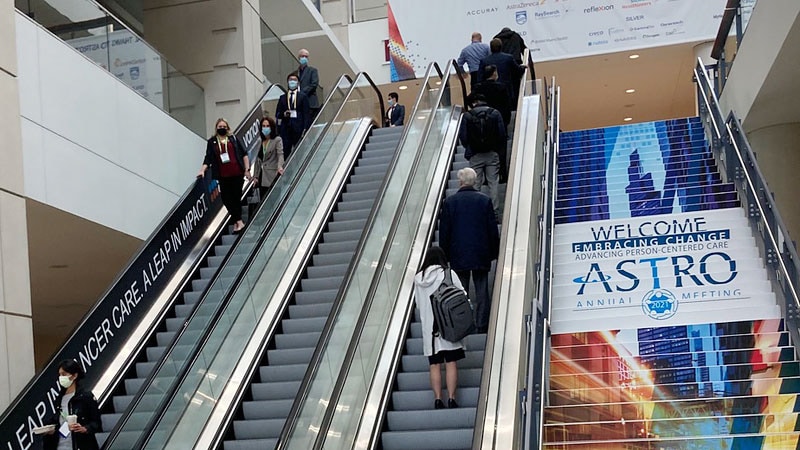 It wasn’t quite the dystopian or post-apocalyptic landscape that we’ve seen in movies. No zombies, blackened skies, or burned-out remnants of a civilization long gone. But all the same, it was just a little bit eerie to be inside the largest convention center in North America in the middle of a major medical conference, but with only a sprinkling of attendees.

Reporting from medical conferences has been a way of life for me since 2005. Working as a medical journalist has meant traveling to a meeting about once a month.

But then it all stopped. Returning home to Seattle from a conference in California in February 2020, I had no idea it would be my last for almost 2 years.

Lockdown began in my state on March 16, viagra generic name funny and like falling dominoes, one by one medical conferences of all stripes were canceled. In some cases, a meeting simply wasn’t held; in others, organizers quickly pivoted to virtual programs.

As the COVID-19 pandemic wore on, I wondered if I’d ever attend another conference.

So when the American Society of Radiation Oncology (ASTRO) decided to hold its annual meeting as a hybrid event in Chicago, allowing both in-person and virtual attendance, I jumped at the chance to travel. I was suffering from “Zoom fatigue” and missed the excitement of live meetings. I was also curious how they would pull off a hybrid conference in the era of COVID-19, given that the pandemic is still going on.

I fully expected that things would be a little different, abbreviated if you will, and my premonition was correct. On day 1, only a handful of people boarded the shuttle bus to the McCormick Place Convention Center, which was a pronounced change from years past. These early morning buses are typically packed to the brim.

We were also masked up like a bunch of well-dressed bandits. Despite the many empty seats on the bus, a few attendees chose to socially distance and sat way in the back. When we reached the convention center, instead of hordes of people rushing off various buses and pouring inside, only a trickle passed through the revolving doors.

I’ve been to many conferences at Chicago’s McCormick Place, and at any given time of day, there are generally throngs of people walking through the concourses, milling around and chatting with colleagues, riding the escalators, and standing in long lines at the registration desk and the coffee shop.

For its past few annual meetings, ASTRO had more than 11,000 attendees, and that doesn’t include exhibitors, journalists, and miscellaneous others.

This year, the in-person attendance was about half of what would have been expected, although the final numbers are not in yet. Although it wasn’t totally deserted, the crowd was decidedly sparse. And not a line to be seen.

This comes as no surprise. There is continued wariness about COVID-19, even in the era of vaccination, and many people do not want to increase their risk by traveling and congregating indoors. In addition, anyone living outside the United States faces barriers to enter the country, as well as quarantine laws and re-entry requirements when returning home. Virtual attendence is definitely easier from a practical point of view, and many speakers delivered their presentations by video.

Attendance at sessions varied considerably. The more popular ones, such as the plenary and presidential sessions, and oral presentations of clinical trial data appeared to be full, although seating had been rearranged to maximize the distance between people. In contrast, some session rooms were nearly empty except for the speakers.

The press room, usually a hub for fellow journalists to hang out and write, network, and chitchat, was also notably empty. I don’t know how many of my fellow writers were in attendance, but if they were at the meeting, they did a good job of staying incognito. Finding a seat near a power outlet can be difficult at the height of a meeting, but not so this time around. I was often the only journalist in the press room.

The other noticeable difference was the lack of food. Normally ASTRO has a buffet for press, and food is available in the exhibit hall.

Not this year. Although coffee, tea, and cold drinks were available, there was no other type of catering. It wouldn’t have been a problem if there had been other options, but virtually all of the food concessions at McCormick Place were closed. The convention center is also far from Chicago’s downtown cafes and restaurants, so it was not an easy task to grab something quick in between sessions.

On the bright side, there were no lines at the ladies rooms during this conference.

So was it safe, COVID-wise?

ASTRO went to great pains to make the meeting as safe as possible for attendees. All attendees and exhibit booth personnel were required to “attest” that they had been fully vaccinated against COVID-19 prior to attending. In cases where vaccination was not possible, attendees had to have tested negative for COVID-19 on PCR within 72 hours of arriving at the convention center. No one checked us, so I assume they took our word for it when we “attested” and that we were on the honor system.

The rules also stipulated that in-person attendees were to fill out daily health questionnaires, which were available online. I assume that for this, we were again on the honor system, since nobody asked for my daily health update, which, I confess, I didn’t do.

In my mind, if you come to an in-person conference, then you should feel comfortable indoors surrounded by a lot of people. Attendees were able to choose their lanyard color, and different colors indicated different social distancing comfort levels. At first, I thought that Liz Gardner, the wonderful manager of ASTRO media relations, was kidding when she showed them to me. But no, she was serious. There was a choice of three colors for lanyards: red (greet from 6′ apart), yellow (talking, elbow/fist bumps allowed) or green (handshakes and high fives approved). I’m not sure how this was supposed to work in real life, such as when passing someone in the exhibit hall from behind. But the session rooms were empty enough, and the exhibit hall was far less crowded than usual, so the situation never arose.

Masks were required in the convention center, the exhibit hall, and on ASTRO shuttle buses, except when eating or presenting. Despite the fact that masks had become commonplace in everyday life, at least in my home state of Washington, it still was strange to see a row of masked panelists on the podium.

Despite the drawbacks and inconveniences, I am so glad that I attended in person. The conference material was first rate, and nothing had changed as to the quality of presentations or professionalism. My personal anxiety level about COVID-19 is low, so I was comfortable being at a meeting, and I felt that ASTRO had taken all necessary measures to make it as safe as possible. At the end of the day, it was a personal choice to attend, because full virtual attendance was available.

For me, it was wonderful to be back at a live conference. Seeing everyone, even a diminished crowd, gave me hope that normalcy is returning to our lives, slowly but surely. I am scheduled to attend another meeting this fall — fingers crossed it will stay live and that I will be able to attend.