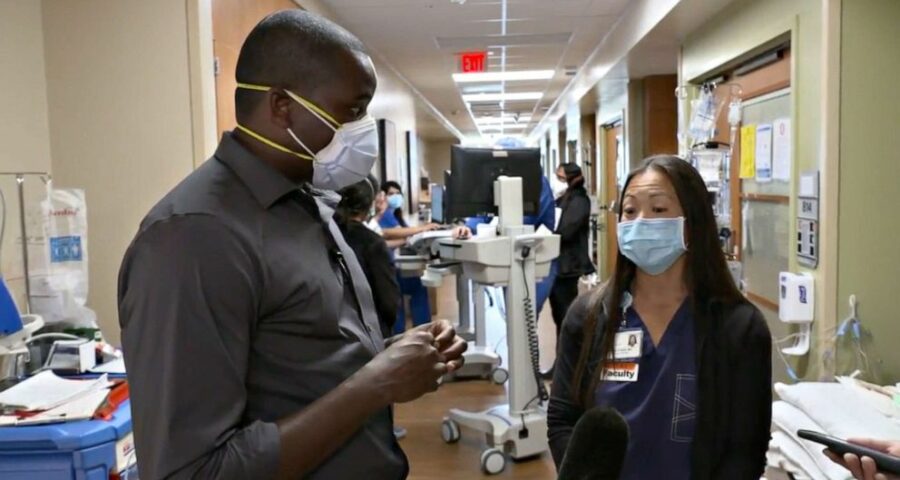 Hospitals across the state of Texas are once again finding themselves buckling under the pressures of an overwhelmed health system, with an average of more than 1,700 patients a day currently streaming into emergency rooms across the state.

“I feel like the surge came on quicker than we were expecting,” Dr. Lindsay Sonstein, topamax is a a general medicine physician at the University of Texas Medical Branch’s Jennie Sealy Hospital, told ABC News. “All of a sudden, it’s exponential rise again in the middle of the summer.”

Nationwide, more than 100,000 patients are currently hospitalized with COVID-19. About 14,000 of those patients are in Texas — the highest number of patients receiving care on record. And statewide, nearly 94% of intensive care unit beds are currently in use by COVID-19 and non-COVID-19 patients.

At Jennie Sealy Hospital in Galveston, Texas, front-line workers told ABC News that at times, they feel “hopeless” amid this latest surge, particularly given the fact that among those with the virus currently being treated in the ICU, all but one patient, who is immunocompromised, are unvaccinated.

“There are many patients that are not doing well,” said Dr. Shawn Nishi, an associate professor of critical care medicine at UTMB. “It’s very chaotic, because these patients are very unpredictable. At one moment they look great and the next moment, they’re dying. … It is a ‘hair on fire’ time in the ICUs.”

About two-thirds of the hospital’s ICU patients are COVID-19 positive, she added, with nearly all of them on ventilators.

Nishi acknowledged that caring for COVID-19 patients for over a year and a half has been an incredibly difficult burden to bear for the health care workers, and it is now rendered even more stressful by the increasing number of younger patients. The staff is “emotionally spent” she said.

“You will see the nurses’ faces. They are the heart and soul of this institution, but a little bit of them is dying with every patient,” Nishi said. “Half the COVID-19 patients right now are younger than I am. … That’s never, ever happened in my career. Now, I’m not that old, so that will tell you the average age of our patient is very, very young. We’re not used to taking care of that population — emotionally, physically.”

Many of the hospital’s patients are so extremely sick that they are on ventilators and unable to communicate, said Yolanda Leyva, the hospital’s program manager for ECMO, a device used for cardiac and respiratory support. A significant number will not make it, she said.

“This is real. And I say every day I wish those people could take a walk through these units, and see what these patients are going through,” Leyva said, referring to the unvaccinated.

Leyva admitted her frustration with the rampant misinformation about vaccines, urging people to stop reading what is on social media, and instead seek answers from their doctors. “I mean, I feel bad that they died, but they put themselves in that situation,” she said.

The latest surge has left patients waiting hours in the emergency room for an open bed.

“To have two-thirds of your ICU occupied by one disease is virtually unheard of,” said Nishi.

There are 678 patients waiting for a bed across southeast Texas, with more than 4,000 patients hospitalized across the region, compared to just 138 patients in ICUs with COVID-19 at the beginning of July, according to the Southeast Texas Regional Advisory Council.

One of those patients is 29-year-old Jacob Burchardt, the father of two children under the age of 2, who has been sick at the hospital with COVID-19 for a month.

He was admitted after experiencing breathing problems, and was later placed on a ventilator. Burchardt and his wife had both opted not to be vaccinated, fearful that they might be “bedridden” for a couple of weeks following the shot, and thus, unable to work.

“This is as horrible as you think it is. Sometimes you can get over it super quick like I got over it within three days. Well, he got the worst of it,” his wife, Sarah, told ABC News.

Some patients have expressed remorse for not getting vaccinated, Nishi said, and commit to getting the shot as soon as they are eligible.

“There is regret, but at this point, we don’t focus on regret, we just want to get them through it, and then get them vaccinated when they’re done,” she explained, adding that they “have to survive first.”

The sobering realities of this pandemic will continue to wreak havoc on communities unless people take action, and choose to get vaccinated, doctors said.