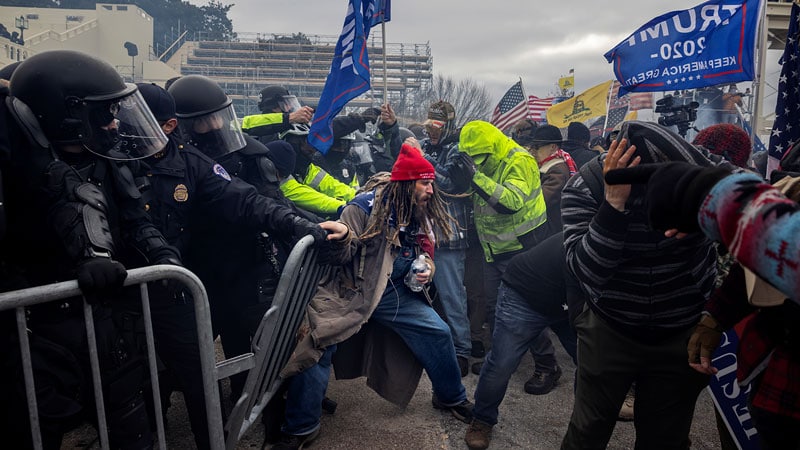 Officer Scott Davis is a passionate man who thinks and talks quickly. As a member of the Special Events Team for Montgomery County, Maryland, he was already staging in Rockville, outside of Washington, DC, when the call came in last January 6 to move their unit to the US Capitol.

“It was surreal,” said Davis. “There were people from all different groups at the Capitol that day. Many people were trying to get out, but others surrounded us. They called us ‘human race traitors.’ And then I heard someone say, plavix missour ‘It’s good you brought your shields, we’ll carry your bodies out on them.’ ”

Davis described hours of mayhem during which he was hit with bear spray, a brick, a chair, and a metal rod. One of the members of Davis’ unit remains on leave with a head injury nearly 9 months after the siege.

For the members of law enforcement officers at the Capitol that day, the repercussions are still being felt, perhaps most notably in the case of the four officers who subsequently died of suicide. Three of the officers were with the Metropolitan Police Department of the District of Columbia and one worked for the Capitol Police Department.

Police officers are subjected to traumas on a regular basis and often placed in circumstances where their lives are in danger. Yet four suicides within a short time — all connected to a single event — is particularly shocking and tragic, even more so for how little attention it has garnered to date.

What Contributes to the High Rate of Suicide Among Officers?

Scott Silverii, PhD, a former police officer and author of Broken and Blue: A Policeman’s Guide to Health, Hope, and Healing, commented that he “wouldn’t be surprised if there are more suicides to come.” This stems not only from the experiences of that day, but also the elevated risk for suicide that law enforcement officers already experienced prior to the Capitol riots. Suicide remains a rare event, with a national all-population average of 13.9 per 100,000 citizens. But as Silverii noted, more officers die by suicide each year than are killed in the line of duty.

“Suicide is a big part of police culture — officers are doers and fixers and it is seen as being more honorable to take yourself out of the equation than it is to ask for help,” he said. “Most officers come in with past pain and this is a situation where they are being overwhelmed and underrespected. At the same time, police culture is a closed culture and it is not friendly to researchers.”

Another contributor is the frequency with which law enforcement officers are exposed to trauma, according to Vernon Herron, Director of Officer Safety and Wellness for the Baltimore City Police.

“Suicide can be a direct result of trauma, and at some point you just can’t absorb it and it leads to problems,” Herron said, citing the psychiatric and addiction issues that officers commonly experience.

Herron and others are working to address these problems head-on.

“We are trying to identify employees exposed to trauma and to offer counseling and intervention,” he said, “Otherwise, everything else will fall short.”

Yet implementing such measures is no easy task, given the lack of a central oversight organization for law enforcement, said Sheldon Greenberg, PhD, a former police officer and professor of management in the School of Education at Johns Hopkins University, Baltimore, Maryland.

“In the United States there is no such thing as ‘The Police.’ There is no one in a position to set policy, standards, or training mandates nationally,” he said. “There are approximately 18,000 police and sheriff departments in the country, and many of them are small. No one can compel law enforcement agencies to implement officer wellness and suicide prevention programs, make counseling available to officers, or train supervisors and peers to identify suicide ideation.”

Greenberg said a further barrier to helping police officers considering self-harm is posed by the fact that even if they do seek out counseling, there is no guarantee that it will remain confidential.

“Support personnel have an obligation to report an officer who is thinking about committing suicide,” he said. “Many officers are concerned about this lack of confidentiality, and that they may be branded if they seek help.”

Although Greenberg said many police officers are self-professed “action junkies,” even their unusually high capacity for stress is often tested by the realities of the job.

“Increasing demands for service, shortages of personnel, misinformation about police, COVID-19, talk about restructuring policing with little concrete direction, increased exposure to violence, greater numbers of vulnerable people, and more, take a toll over time,” he lamented. “In addition, we are in a recruiting crisis in law enforcement and there are no standards to ensure the quality of psychological screening provided to applicants. Many officers will go through their entire career and never be screened again. We know little about the stresses and strains that officers bring to the job.”

It is not clear how many police officers were present at the Capitol on January 6. During the chaos of the day, reinforcements to the Capitol Police Department arrived from Washington DC, Maryland, and Virginia, but no official numbers on responders were obtained; Davis thought it was likely that there were at least 1000 law enforcement officers present. Those who did respond sustained an estimated 100 injuries, including an officer who died the next day. Of the officers who died by suicide, one died 3 days after, another died 9 days later, and two more died in July — numbers that contradict the notion this is some coincidence.

Officer Alexander Kettering, a colleague of Davis who has been with Montgomery County Police for 15 years, was among those tasked with protecting the Capitol on January 6. The chaos, violence, and destruction of the day has stuck with him and continues to occupy his thoughts.

“I had a front-row seat to the whole thing. It was overwhelming and I’ve never seen people this angry,” said Kettering. “There were people up on the veranda and on the scaffolding set up for the inauguration. They were smashing windows and throwing things into the crowd. It was insane. There were decent people coming up to us and saying they would pray for us, then others calling us traitors, telling us to stand down and join them.”

In the aftermath of the Capitol siege, Kettering watched in dismay as the narrative of the day’s events began to warp.

“At first there was a consensus that what happened was so wrong, and then the politics took over. People were saying it wasn’t as bad as the media said, that it really wasn’t that violent and those speaking out are traitors or political operatives. I relive it every day and it’s hard to escape, even in casual conversation.”

He added that the days’ events were compounded by the already heightened tensions surrounding the national debate around policing.

“It’s been 18 months of stress, of anti-police movements, and there is a fine line between addressing police brutality and being anti-police,” Kettering said, noting that the aforementioned issues have all contributed to the ongoing struggles his fellow officers are experiencing.

“It’s not a thing for cops to talk about how an event affected them,” he said. “A lot of officers have just shut down. People have careers and pensions to protect and every time we stop a motorist, something could go wrong, even if we do everything right. There are mixed signals, they tell us, ‘Defend but don’t defend.’ ”

His colleague Davis said that officers “need more support from politicians,” noting that he felt particularly insulted by a comment made by a Montgomery County public official who accused the officers present at the Capitol of racism. “And finally, we feel a little betrayed by the public.”

More Questions Than Answers From the Capitol’s Day of Chaos

What about the events of January 6 led to the suicides of four law enforcement officers and what can be done to prevent more deaths in the future? There are the individual factors of each man’s personal history, circumstances, and vulnerabilities, including the sense of being personally endangered, witnessing trauma, and direct injury — one officer who died of suicide had sustained a head injury that day.

We don’t know if the officers went into the event with preexisting mental illness or addiction, or if the day’s events precipitated psychiatric episodes. And with all the partisan anger surrounding the presidential election, we don’t know if each officer’s political beliefs amplified his distress over what occurred, in a social media climate where police are being faulted by all sides.

When multiple suicides occur in a community, there is always concern about a “copycat” phenomena. These concerns are made more difficult to address, however, given the police culture of taboo and stigma associated with getting professional help, difficulty accessing care, and career repercussions for speaking openly about suicidal thoughts and mental health issues.

Finally, there is the current political agenda that leaves officers feeling unsupported, fearful of negative outcomes, and unappreciated. The Capitol siege in particular embodied a great deal of national distress and confusion over basic issues of truth, justice, and perceptions of reality in our polarized society.

Can we move to a place where those who enforce laws have easy access to treatment, free from stigma? Can we encourage a culture that does not tolerate brutality or racism, while also refusing to label all police as bad and lending support to their mission? Can we be more attuned to the repercussions of circumstances where officers are witnesses to trauma, are endangered themselves, and would benefit from acknowledgement of their distress?

Time will tell if our anti-police pendulum swings back. In the meantime, these four suicides among people defending our country remain tragically overlooked.