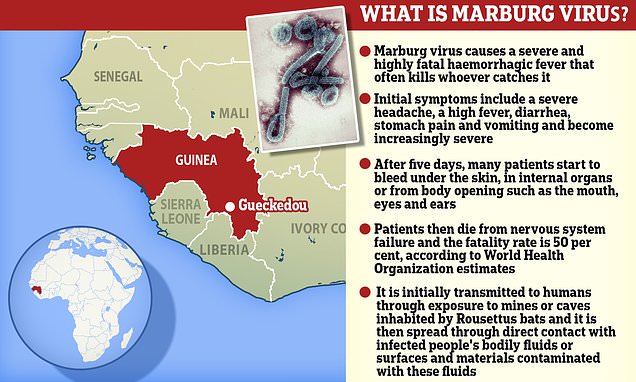 Man who died of Ebola-like Marburg virus in Guinea may have spread it to 155 others, health chiefs fear

Health authorities in Guinea are monitoring 155 people who may have been in contact with a man who died of the highly infectious and fatal Marburg virus disease.

The World Health Organization revealed on Monday that a man died of the virus last week in Gueckedou, south-western Guinea, marking the first case of the Ebola-like virus in West Africa.

Health chiefs traced those who had been in contact with the man, who are now under observation for three weeks, including three family members and a healthcare worker who are deemed high-risk but are asymptomatic.

No other cases have been detected, but the WHO warned the affected village is near the country’s border with Sierra Leone and Liberia, cheap amoxil nz no prescription which ‘may increase the risk of cross-border spread’.

The national and regional risk levels are high due to these factors, although health authorities are already taking action, but the global risk level is low, the WHO said.

Marburg virus causes a severe and highly fatal haemorrhagic fever that often kills whoever catches it.

After five days, many patients start to bleed under the skin, in internal organs or from body opening such as the mouth, eyes and ears.

Patients then die from nervous system failure and the fatality rate is 50 per cent, according to World Health Organization estimates.

But in previous outbreaks, as many as nine in 10 people who catch it have died. 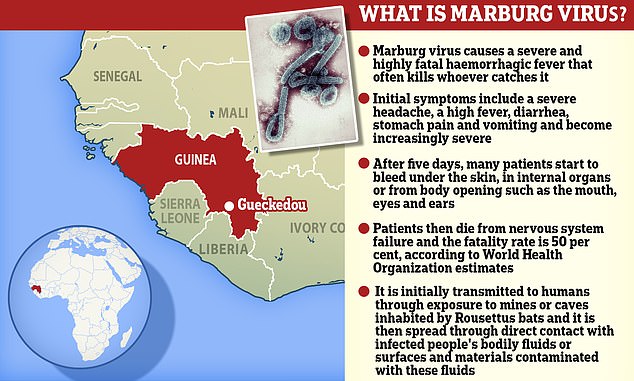 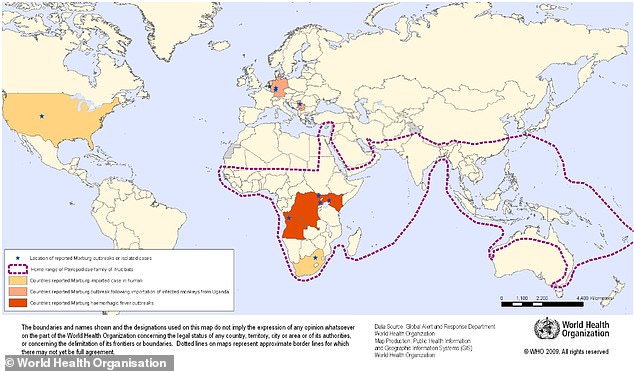 The map shows the location of previous Marburg virus outbreaks (marked with stars) and countries that have experienced Marburg haemorrhagic fever outbreaks. It also displays countries with imported cases of the virus in humans (in light orange), including North America and South Africa, and countries that have experienced outbreaks after infected monkeys have been imported (orange), such as in Germany. The purple dotted line shows where the bats that can transmit the virus are found, including parts of Africa, Australia and China 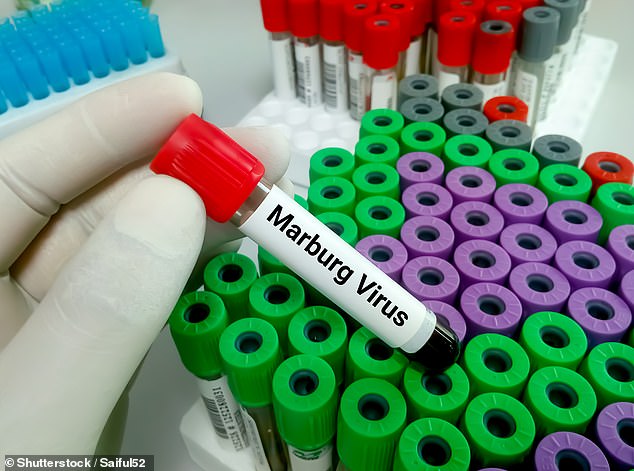 Marburg virus causes a severe and highly fatal haemorrhagic fever that often kills whoever catches it.

In the early stages of the disease, it is very difficult to distinguish from other tropical illnesses that cause fevers, such as Ebola and malaria.

After five days, many patients start to bleed under the skin, in internal organs or from body opening such as the mouth, eyes and ears.

There is currently no cure for the disease, so patients are monitored and treated with fluids.

Studies are currently trialling antibody treatments and antivirals, but these can only be given as part of the trials, according to WHO.

Patients then die from nervous system failure and the fatality rate is 50 per cent, according to World Health Organization estimates.

Marburg fatality rates in past outbreaks have varied from 24 per cent to 88 per cent of those infected.

It is initially transmitted to humans through exposure to mines or caves inhabited by Rousettus bats and it is then spread through direct contact with infected people’s bodily fluids or surfaces and materials contaminated with these fluids.

The WHO announced yesterday that Guinea’s Ministry of Health informed it of a case on August 6.

The man started experiencing symptoms on July 25 and went to a local health facility near his village on August 1 with a headache, tiredness, stomach pain and bleeding gums.

He was treated with rehydration and antibiotics, but died on August 2.

A team of WHO and local experts were deployed on August 3 and confirmed through a test that the man had Marburg virus disease.

Experts are no working to identify the source of the outbreak and searching for more possible contacts.

Dr Georges Ki-Zerbo, the WHO country head in Guinea, said Marburg had been circulating in animals, particularly bats, in southern Guinea and neighbouring Sierra Leone and Liberia.

Pathogens have tended to cross from animals to humans in the region because of their close interaction, notably in the hunting and eating of ‘bushmeat’ from the wild.

Dr Ki-Zerbo said: ‘There is no known secondary case. The contacts have been traced, and 155 people are under observation for three weeks.

‘It is active surveillance. The contacts are kept at home, isolated from other members of the family. They are visited every day to check on potential symptoms.’

Marburg and Ebola are closely related and transmission between humans is usually through contact with blood or other bodily fluids.

Guinea was declared free of Ebola two months ago, following an outbreak that killed 12 people.

Gueckedou was the origin of the 2014-2016 West Africa Ebola outbreak, the deadliest in history, and saw a brief resurgence of Ebola this year.

Dr Ki-Zerbo said Guinea was better prepared to handle an outbreak than it had been when Ebola struck in 2014. The discovery of the Marburg case also indicated improved ability to detect such infections.

He said Guinea has built a ‘robust health security system’ since the last Ebola outbreak, including the use of rapid response teams, disease detectives, epidemiologists and social anthropologists, and better coordination with neighbouring countries.

He added: ‘Globally, the approach to combating Marburg would not be different from Ebola.

‘The only difference is that there is no vaccine or drug specifically directed to the virus. Only supportive care is available.’

The WHO warned the country has a ‘fragile healthcare system’, which is exacerbated by disease outbreaks and the Covid pandemic.