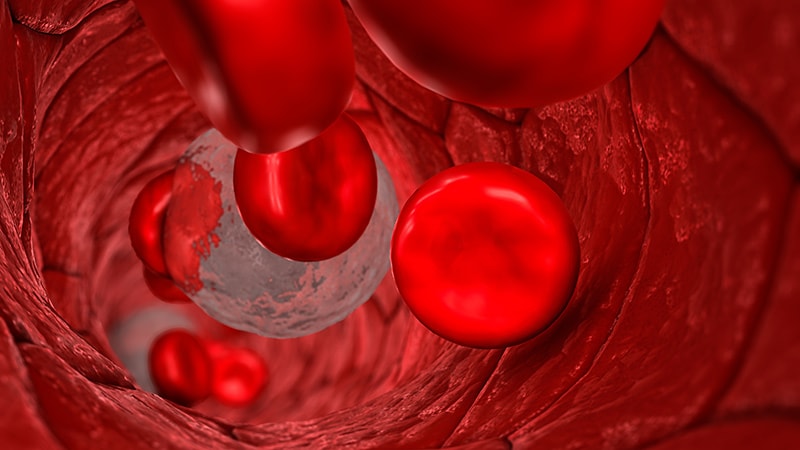 Further results from the MASTER DAPT trial of abbreviated dual antiplatelet therapy (DAPT) after percutaneous coronary intervention (PCI) in patients at high bleeding risk stratified by use of oral anticoagulants have now been reported, with experts in the field having differing interpretations on how these results may affect clinical practice.

The main MASTER DAPT trial, presented at the European Society of Cardiology (ESC) Congress 2021 and published in the New England Journal of Medicine, showed that switching from DAPT to single antiplatelet therapy just 1 month after PCI was noninferior to the continuation of DAPT treatment for a median duration of 193 days with regard to the incidence of major adverse cardiac or cerebral events and was associated with a lower incidence of major or clinically relevant bleeding in the overall population enrolled in the study, who were all classified as high bleeding risk.

This analysis was presented at a later session during the ESC by Pieter Smits, MD, Maasstad Hospital, Rotterdam, the Netherlands. It was also published online in Circulation on August 29.

“Our results show that it is safe and beneficial to stop DAPT after 1 month in patients at high bleeding risk with or without an indication for oral anticoagulation,” Smits concluded.

In the Circulation paper, the authors say these are their main findings from this analysis:

In the main MASTER DAPT trial, 4579 patients at high bleeding risk were randomly assigned after 1-month DAPT to abbreviated or nonabbreviated antiplatelet strategies.

In the population with an indication for an oral anticoagulant, patients changed immediately to single antiplatelet therapy for 5 months and continued thereafter with oral anticoagulation monotherapy only (abbreviated regimen) or continued DAPT until at least 2 months and then switched to single antiplatelet therapy until 12 months (nonabbreviated regimen).

Experts in the field had differing interpretations on how these results may affect clinical practice.

Davide Capodanno, MD, University of Catania in Catania, Italy, said: “My take is that there seems to be a significant statistical interaction on BARC 2 type bleeding by use of oral anticoagulation regarding the treatment effect of abbreviated DAPT. In fact, BARC 2 bleeding was significantly less with abbreviated DAPT only in patients without an indication for oral anticoagulation,” he noted.

“This is probably because the difference in the average lengths of DAPT duration was smaller in patients taking oral anticoagulants (1 vs 3 months after PCI) as compared with non-OAC patients (1 vs 6-12 months), so it is more difficult to find an effect in context where durations of DAPT are relatively close,” he said.

Capodanno pointed out that for patients on oral anticoagulants, current guidelines recommend 1 week to 1 month of DAPT, with preference to 1 week. “As such, the trial tested a strategy that many physicians, including me, use only in special circumstances,” such as acute coronary syndrome or complex PCI.

For the other patients, he said: “It is important to remember that while they are not on oral anticoagulants, they entered the trial due to other high bleeding risk qualifying criteria. For these patients, we learned that 1 month of DAPT after PCI reduces clinically relevant nonmajor bleeding compared with 6 to 12 months, with no apparent penalty on ischemic events, which is good to know.”

Robert Byrne, MD, Mater Private Hospital, Dublin, Ireland, agreed with the authors that the findings of this analysis suggest that treatment effects were broadly consistent in patients regardless of whether they were receiving oral anticoagulation.

“One finding that caught my attention was that in patients receiving oral anticoagulation, there was no difference in rates of actionable bleeding (BARC 2-5) between abbreviated and nonabbreviated DAPT treatment groups,” Byrne noted.

“This may simply be a function of power in the smaller patient population in the subgroup. However, it is in line with experiences from the ISAR TRIPLE randomized trial, which also compared abbreviated and nonabbreviated DAPT in patients receiving OAC and similarly, and somewhat surprisingly, failed to detect a significant difference in bleeding in the overall analysis.”

Byrne added: “While I would be reluctant to read too much into this, it might give some comfort, if we feel a need for slightly more prolonged DAPT after a complex or high-risk intervention for example. Indeed, the similar findings in terms of NACE, MACCE, and overall mortality in the main trial, can be interpreted as broadly supportive of individualized treatment in the appropriate clinical risk setting.”

On putting the MASTER DAPT results together with prior studies of patients on oral anticoagulation and treated with dual vs triple therapy, Byrne concluded: “Considering the totality of the evidence, I am inclined to consider 1 month of DAPT (potentially on a background of reduced-dose oral anticoagulation for that time period) as a sweet spot for many of these patients.”

“In those patients not on an oral anticoagulant, it is notable that the incidence of MI directionally favored a longer duration of DAPT over an abbreviated 1-month course, but this difference was not significant and the overall incidence of MACCE was similar between treatment arms,” she added.

But Magnus Ohman, MD, Duke University School of Medicine, Durham, North Carolina, who authored an editorial accompanying publication of the main trial in the New England Journal of Medicine, voiced a note of caution.

“The reduction in bleeding with abbreviated DAPT appears to be driven by the observations in the nonoral anticoagulant group, and there now appears to be a worrying doubling in the stent thrombosis rate with abbreviated DAPT in this group (0.8% vs 0.3%), but it is very underpowered,” Ohman said. “So, I think that my conclusion will stay from the editorial that to some, the rate of ischemia (including stent thrombosis) could be worrisome.”

Ohman added: “I think many of us have switched to the AUGUSTUS trial regimen with early stopping of aspirin on full oral anticoagulation, while maintaining the clopidogrel for a year. This analysis suggests that we may shorten this further in patients at higher risk of bleeding.

“Personally, I would like to see this replicated from another trial, as the sample size in this subgroup is relatively modest,” he concluded.