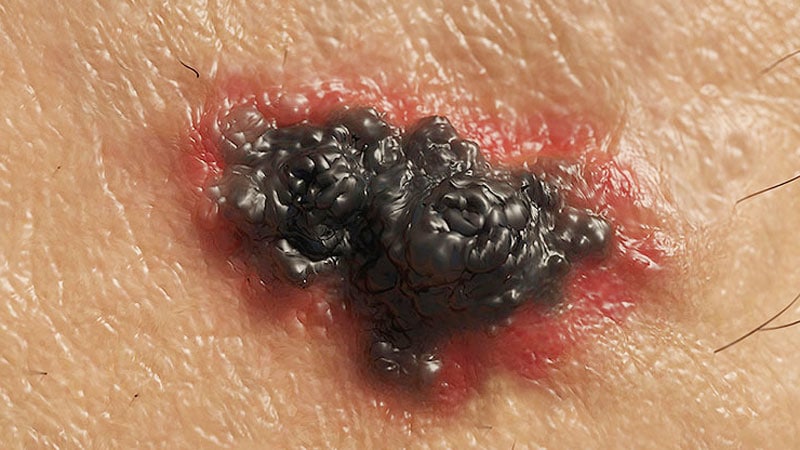 In Australia, where they know a thing or two about skin cancer, authors of a large prospective population-based cohort study found that melanomas detected through routine skin checks were associated with lower all-cause mortality, but not melanoma-specific mortality.

Among patients in New South Wales diagnosed with melanoma in 2006 or 2007 and followed for nearly 12 years, there was no significant difference in the rate of melanoma-specific death associated with either patient-detected or clinician-detected melanomas in an analysis adjusted for prognostic factors.

Although melanomas found through routine clinician-performed skin checks were associated with a 25% reduction in all-cause mortality compared with patient-detected lesions (P = .006), this difference may have been due to the tendency of health-oriented patients to participate in screening programs.

The study — one of the largest to date and performed in an area of the world where there is a high incidence of skin cancer and high degree of public awareness of the risks of too much sun exposure — could not fully answer its central question: Can routine skin checks, a proxy for skin cancer screening, generic femara next day no prescription significantly decrease the incidence of melanoma-related deaths?

“A large randomized clinical trial is needed to provide definitive evidence that screening for skin cancer reduces melanoma-specific and all-cause mortality among people invited (vs. not invited) to screen, but there are concerns about feasibility. Our findings could be used to estimate the sample size for a future trial,” wrote Caroline G. Watts, PhD, of the University of Sydney, Australia, and colleagues. Their study was published online Nov. 3 in JAMA Dermatology.

In an editorial accompanying the study, dermatologists Allan C. Halpern, MD, and Michael A. Marchetti, MD, of Memorial Sloan-Kettering Cancer Center in New York, point out that “there has never been a randomized clinical trial of melanoma screening, nor is there one currently ongoing or planned. Even if one were to be initiated immediately, such a trial would take well over a decade to conduct.

“Thus, for the foreseeable future, our approaches to melanoma secondary prevention need to be based on indirect evidence and our understanding of biology and epidemiology,” they wrote.

A dermatology researcher who was not involved in the study said that while it doesn’t solve the screening conundrum, it does highlight the value of public health campaigns.

“The way that I interpret the data, especially the fact that it’s coming out of Australia, is that if education about self-examination is done properly, that can also be effective in terms of detecting these skin cancers,” said Shawn Demehri, MD, PhD, principal investigator at the Cutaneous Biology Research Center at Massachusetts General Hospital, Boston. Demehri was asked to comment on the study.

“I would argue that the results would probably have been different if the study had been conducted in the U.S. rather than Australia, because the education in terms of self-examination is much more advanced and organized in Australia,” he said in an interview.

To assess melanoma-specific and all-cause mortality associated with melanoma identified through routine skin checks, Watts and colleagues followed patients diagnosed with melanoma from October 2006 through October 2007 who were enrolled in the Melanoma Patterns of Care Study. The patients were followed until 2018 (mean follow-up 11.9 years).

Of the 2,452 patients for whom data were available, 291 had an initial diagnosis of primary melanoma in situ (MIS), and 2,161 were diagnosed with invasive cutaneous melanoma.

The median age at diagnosis was 65 years, ranging from 16 to 98 years. Nearly two-thirds of the patients (61%) were men.

But after adjustment for melanoma prognostic factors such as ulceration and mitotic rate, the association of skin check–detected lesions with melanoma-specific mortality was no longer statistically significant. The association with lower all-cause mortality was somewhat attenuated, but remained significant (HR, 0.75, P = .006).

Factors associated with a higher likelihood of melanoma detection during routine skin checks included males vs. females, a history of melanoma, having multiple moles, age 50 or older, and residence in a urban vs. rural areas.

In their editorial, Halpern and Marchetti propose methods for screening that find a balance between detection of significant disease and potential harm to patients from unnecessary biopsy or invasive procedures.

“For many lesions, we could use serial photography and dermoscopy in lieu of tissue biopsy to identify those that are truly dynamic outliers and likely to be of greater risk to the patient. An analogous approach is already used for the management of small lung nodules detected incidentally and through screening,” they wrote.

They also raise the issue of potential overdiagnosis and overtreatment of MIS, and recommend an approach similar to that used for some older patients with prostate cancer, for example.

“The consequences of MIS treatment differ greatly based on the type, anatomic location, and size of the tumor; these factors should be considered in shared decision-making with patients. Options such as active surveillance and topical therapy should be discussed, particularly in those with significant comorbidities or advanced age,” they wrote.

The study was supported by grants from the Australian National Health and Medical Research Council, Cancer Institute New South Wales, and the New South Wales State Government. Watts, Halpern, Marchetti, and Demehri reported having no conflicts of interest.

This story originally appeared on MDedge.com, part of the Medscape Professional Network.