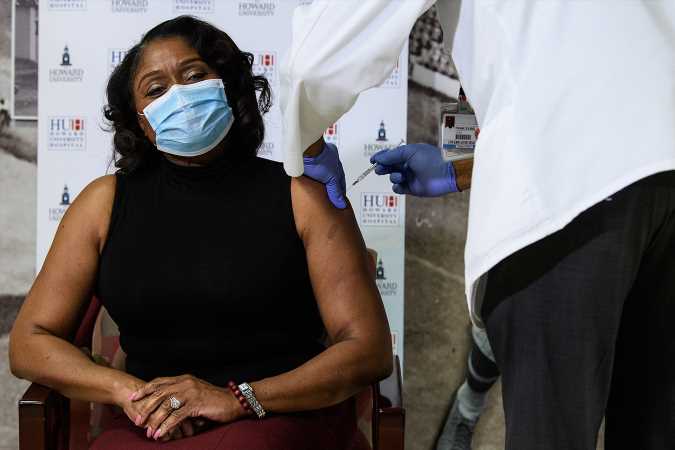 Administrators at Howard University Hospital in Washington, D.C., were thrilled to be among the city’s first hospitals to get a COVID-19 vaccine, but they knew it could be a tough sell to get staffers to take the shot.

The hospital, located on the campus of one the nation’s oldest historically Black colleges, wanted calcium carbonate received 725 doses of the vaccine made by Pfizer and BioNTech on Dec. 14 and expects 1,000 more vaccine doses this week to immunize its workers.

Yet, as of Friday afternoon, about 600 employees had signed up for the shots, touted as about 95% effective in preventing the deadly disease. Howard has about 1,900 employees, not counting hundreds of independent contractors it also hoped to vaccinate.

“There is a high level of mistrust and I get it,” said Anita Jenkins, the hospital’s chief executive officer who received the shot Tuesday in hopes of inspiring her staff to follow her lead. “People are genuinely afraid of the vaccine.”

Studies showed few serious side effects in more than 40,000 people before the vaccine was authorized for emergency use in the U.S. A few people worldwide have had allergic reactions in the past week.

In late November, a hospital survey of 350 workers found 70% either did not want to take a COVID vaccine or did not want it as soon as it became available.

So, officials are not dismayed at the turnout so far, saying it shows their educational campaign is beginning to work.

“This is a significant win,” said Jenkins, who added she was happy to “take one for the team” when she and other health care personnel got the first shots. About 380 Howard employees or affiliated staff had been vaccinated by Friday afternoon.

Although hesitancy toward the vaccine is a challenge nationally, it’s a significant problem among Black adults because of their generations-long distrust of the medical community and racial inequities in health care.

When Jenkins posted a picture of herself getting vaccinated on her Facebook page, she received many thumbs up but also pointed criticism. “One called me a sellout and asked why I would do that to my people,” she said.

Before being vaccinated, Jenkins said, she read about the clinical trials and was glad to learn the first vaccines in development were unlike some that use weakened or inactivated viruses to stimulate the body’s immune defense. The COVID vaccine by Pfizer and BioNTech does not contain the actual virus.

And one factor driving her to take the shot was that some employees said they would be more willing to do it if she did.

The hesitancy among her staff members has its roots in the Tuskegee syphilis experiment, said Jenkins, who started at Howard in February.

The 40-year study, which was run by the U.S. Public Health Service until 1972, followed 600 Black men infected with syphilis in rural Alabama over the course of their lives. The researchers refused to tell patients their diagnosis or treat them for the debilitating disease. Many men died of the disease and several wives contracted it.

Jenkins said she was not surprised that many Howard employees — including doctors — are questioning whether to take a vaccine, even though Black patients are twice as likely to die of COVID-19.

While African Americans make up 45% of the population in the District of Columbia, they account for 74% of the 734 COVID deaths. Nationally, Blacks are nearly four times more likely to be hospitalized due to COVID compared with whites and nearly three times more likely to die.

Howard, which has treated hundreds of COVID patients, was one of six hospitals in the city to get the first batch of nearly 7,000 doses of the Pfizer vaccine Monday. About one-third of those doses were administered by Friday morning, said Justin Palmer, a vice president of the District of Columbia Hospital Association.

Federal officials Friday authorized a second vaccine, made by Moderna, for emergency use. That vaccine is expected to be distributed starting this week.

The political bickering over the COVID response has also hurt efforts to instill confidence in the vaccine, Jenkins said.

Other than a sore arm, Jenkins said, she’s had no side effects from the vaccine, which can also commonly cause fatigue and headache. “Today I am walking the halls,” she explained, “and I got the shot two days ago.”

Part of the challenge for Jenkins and other hospital officials will be persuading employees not just to take a vaccine now but to return for the booster shot three weeks later. One dose offers only partial protection.

Jenkins said the hospital plans to make reminder calls to get people to follow up. She said efforts to increase participation at the hospital will also continue.

“It was important for me to be a standard-bearer to show the team I am in there with them,” she said.