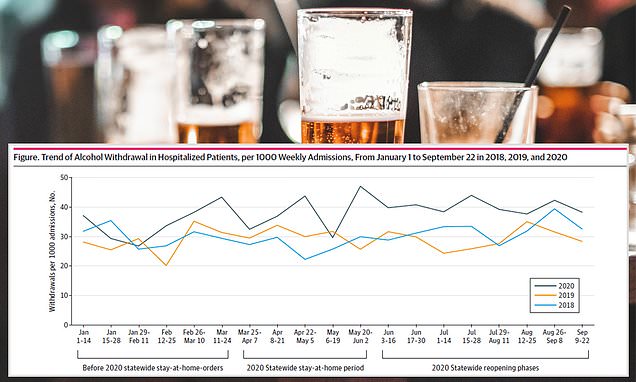 Grim rise of pandemic alcoholism: Two hospitals saw 34% increase in patients suffering from alcohol withdrawals when admitted for other conditions during the COVID-19 crisis

Alcohol withdrawal rates have skyrocketed amid the coronavirus pandemic, a new study suggests.

Researchers found a 34 percent increase in hospitalized patients experiencing symptoms such as headaches, nausea, tremors and seizures due to not using alcohol after a period of heavy drinking.

What’s more, the rates from March to September in 2020 were consistently higher compared to 2019.

The team at ChristianaCare, does alli work one of the largest health systems in the mid-Atlantic region, believes its study is the first to quantify alcohol withdrawal rate among people in the hospital.

They say the findings are a ‘clarion call’ for other hospital systems to ramp up their screening for alcohol use withdrawal so it can be treated.

A new study found that, over the course of the pandemic, from March 25 to September 22, alcohol withdrawal rates increased by 34% compared to the same time period in 2019 (above)

‘We designed the study to capture the big picture,’ said lead author Ram Sharma, a psychiatry resident at ChristianaCare.

Alcohol withdrawal is the name for the changes that occur when somebody who has been drinking heavily for a long time suddenly stops or significantly reduces alcohol intake.

Among people who drink heavily long-term, their brain chemistry adjusts because it is constantly exposed to alcohol’s sedating effect or depressant effect.

The brain makes more stimulating chemicals, such as serotonin or norepinephrine, to compensate for the effects of alcohol.

Therefore, when alcohol is withdrawn suddenly, the brain is overstimulated.

Some of the milder symptoms that can be experienced including headaches, nausea and vomiting.

However, some patients experience more severe symptoms such as tremors, hallucinations, seizures and delirum tremens, which is when there is a dangerous shift in a person’s breathing.

For the study, published in JAMA Network Open, the team looked at data for all patients hospitalized at two of ChristianaCare’s Delaware hospitals, Christiana Hospital and Wilmington Hospital, between January 1, 2018 and September 22, 2020. 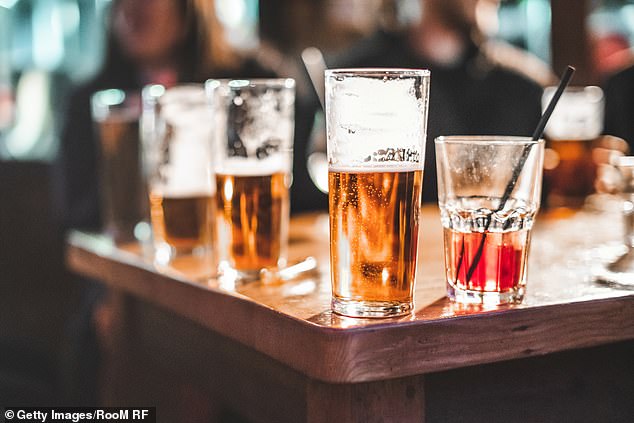 During the last two weeks of May, rates of hospitalized patients with alcohol withdrawal were 84% in comparison with the same two weeks in 2019 (file image)

Next, the team compared rates of alcohol withdrawal in 2020 with corresponding periods in 2018 and 2019.

Results showed that during the pandemic, from March 25 to September 22,  alcohol withdrawal in hospitalized patients increased by 34 percent in comparison with the same time period in 2019.

The largest incidence occurred during the last two weeks of the stay-at-home order, with an 84 percent higher rate of alcohol withdrawal patients compared to the same two weeks in 2019.

‘Our findings are relevant nationally and serve as a clarion call to alert other hospital systems to the increased need to screen for and treat alcohol use withdrawal, and to refer patients for ongoing alcohol treatment,’ said senior author Dr Terry Horton, ChristianaCare’s chief of Addiction Medicine.

‘Our study makes use of ChristianaCare’s ongoing surveillance for alcohol withdrawal, which can occur when patients admitted to the hospital are cut off from all sources of alcohol.’