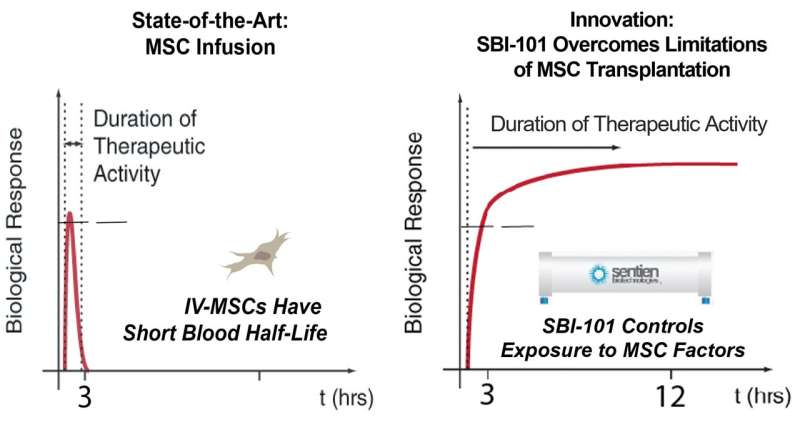 Acute kidney disease occurs when a kidney is suddenly unable to do its job of filtering blood and allows dangerous levels of waste to accumulate. The most severe cases require dialysis or a kidney transplant. Unfortunately, dialysis-dependent acute kidney injury has a mortality rate as high as 50 to 70 percent.

Inflammation is a key driver behind this. In critical illnesses inflammation mediators become dysregulated, driving a “cytokine storm” leading to a vicious cycle of immunity that further damages the kidney and other organs. Current treatments fail to broadly address these underlying inflammatory processes.

“Rebalancing the inflammatory response with a cell immunotherapy may offer a multifaceted approach to break the cycle and restore organ function after severe injury,” explained the study’s corresponding author, Biju Parekkadan, wellbutrin zetron Ph.D., the scientific co-founder of Sentien Biotechnologies, Inc., in Lexington, Mass.  Sentien executed its first-in-human study by working with several centers across the United States to test its SBI-101 product in a Phase 1b clinical trial.

MSCs secrete several types of molecules that modulate an immune cell’s response to inflammation and therefore have great potential for use in regenerative medicine. However, MSCs administered the conventional intravenous way are generally filtered out in the lungs and undetectable in the body soon after administration. “Given this rapid clearance, they may not be able to match the dose needed to durably impact a systemic immune response,” Dr. Parekkadan said.

This pharmacological insight has led to the search for a more efficient method of delivering MSCs. The innovation of SBI-101 therapy is the combination of “off-the-shelf” MSCs and an FDA-approved blood filtration device to improve and control the exposure to MSCs. This design allows for the patient’s blood to be reprogrammed outside the body, in a device housing MSCs, thereby maintaining their viability for the duration of treatment.

“In effect, SBI-101 behaves as tissue of MSCs that works outside the body to sense inflammation in the patient’s bloodstream and respond with a natural mixture of growth factors, cytokines and chemokines to normalize immune signaling and function,” Dr. Parekkadan explained.

The Phase 1 trial reported on in SCTM was designed to test the safety, tolerability and pharmacology of SBI-101 in adults with life-threatening kidney failure who were already receiving dialysis. Sixteen patients were recruited for the study. Twelve were treated with SBI-101, along with their standard continuous renal replacement therapy (CCRT) regimen, while four received a sham SBI-101 along with CRRT. The treatment period lasted for at least 12 hours, and up to 24. (CCRT is a slower form of dialysis that puts less stress on the heart. Treatment generally lasts 24 hours, versus the four hours of conventional dialysis routines.)

Assessments were then taken in intervals over a 28-day period after treatment. They showed that MSCs were viable for the 24-hour dose by measured secreted factor levels, verifying a longer duration of therapy than intravenous routes have shown. Moreover, SBI-101 promoted an immunotherapeutic response that was associated with a reduction in kidney injury by measuring surrogate biomarkers. No serious adverse effects related to SBI-101 were seen.

“These early results suggest that SBI-101 can impact a peripheral immune response that can be transmitted to local tissue damage in vital organs, including the kidney. This important first step lays a foundation to study how this immunotherapy can impact patient outcomes in larger patient trials,” Dr. Parekkadan concluded.