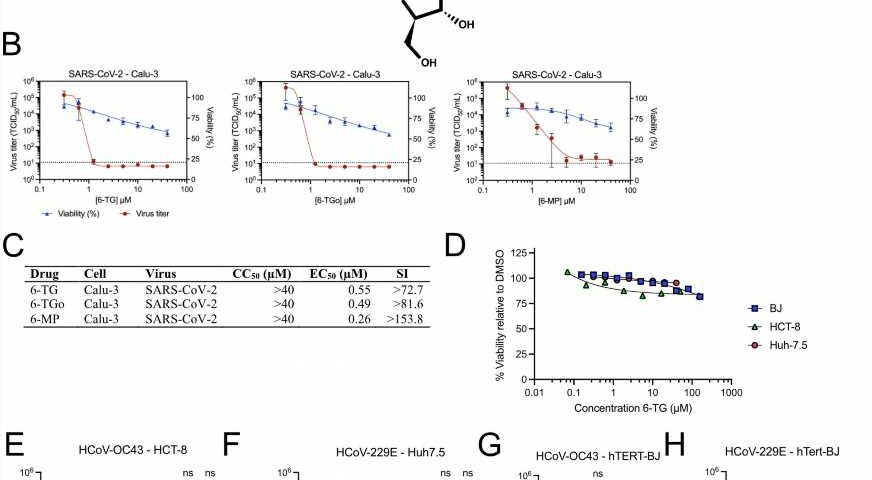 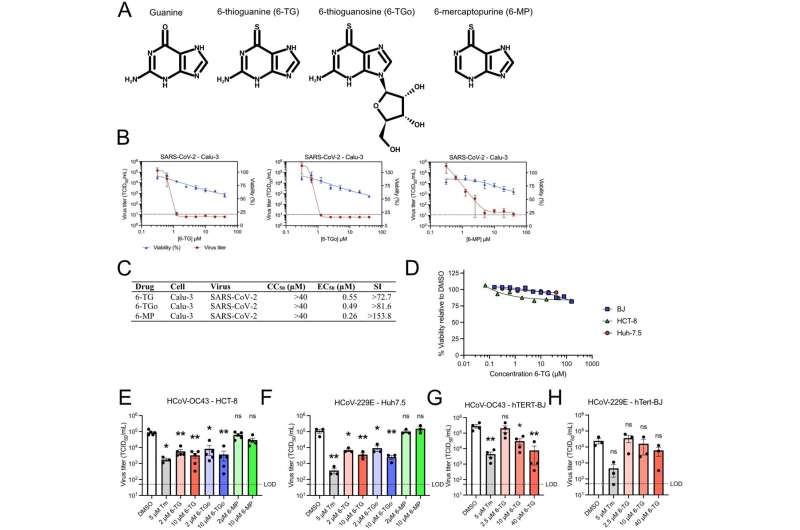 In early 2020, Eric Pringle and Brett Duguay found themselves spending much of their time in their microbiology lab on the seventh floor of Dal’s Tupper Building. The virologists were busy testing potential antivirals for common cold coronaviruses and were seeing promising results.

The pair, both post-doctoral researchers working with Dr. Craig McCormick, were studying an approved drug already being used to treat other diseases, like cancer and irritable bowel syndrome. Their lab recently completed a separate study showing the drug—6-Thioguanine or 6-TG—was surprisingly effective at inhibiting flu virus replication in the laboratory.

Just as they were wrapping up that work, however, the World Health Organization declared the COVID-19 pandemic, ushering in widespread lockdowns that shuttered labs and put some research on hiatus at institutions around the globe.

Exceptions were being made for some researchers studying the highly transmissible and potentially lethal SARS-CoV-2 and other coronaviruses.

“That’s when we decided, ‘We need to test this antiviral that we have for flu on coronaviruses’,” Dr. Duguay says in the lunchroom of the bright, busy lab. “So, we were able to get common cold coronaviruses and we tested 6-TG right away and it worked right away.”

Drs. Duguay and Pringle, along with colleagues in the McCormick Lab, got permission to go back into their laboratory in March 2020 and began looking at how 6-TG would work on strains of common cold coronaviruses, like OC43 and 229E.

As with scientists around the world, they were trying to understand if repurposing existing drugs could be safe and effective treatments for COVID-19. They were curious to learn more about how coronaviruses interact with human host cells and where the dependencies lie, which could help identify where their weaknesses might be.

Ultimately, they discovered a new effect—or mechanism of action—for 6-TG. In cell-culture experiments, they found that the drug can inhibit the replication of human coronaviruses, including SARS-CoV-2. It does so by interfering with the development of the virus’s hallmark spike proteins, which are needed to penetrate the host cell and initiate infection. Without them, viruses like SARS-CoV-2 cannot interact with host cell or spread.

“One of the major outcomes of treating with this drug is it inhibits the ability of virus to make lots of spike proteins and incorporate them into new progeny or baby viruses, so the baby viruses that are made are spike-less and as a result cannot initiate infection,” says Dr. McCormick, a virologist and professor in Dal’s Department of Microbiology and Immunology.

Dr. Pringle explains that the spikes are glycosylated, meaning they are covered in sugars. Those sugars help viruses evade the immune system by shielding the spike from antibodies.

“What we found is that the antiviral 6-TG inhibited proper glycosylation, so the spike doesn’t get a sugar coat and doesn’t function properly,” he says.

The researchers, whose findings were outlined in a recent paper, were using common cold coronaviruses and colleagues they were working with at the universities of Saskatchewan and Calgary were evaluating the effect of 6-TG on SARS-CoV-2. They measured how much virus was produced by a cell infected with the virus versus one treated with the drug. The amount of replication in the treated cell was impressively low.

“That’s what you want an antiviral to do—you want it to dampen how much virus is being produced so it spreads less effectively, fewer people get sick and those who are sick are less sick,” says Dr. Duguay.

The team is working with Dalhousie medicinal chemist and neurologist, Dr. Sultan Darvesh, to better understand how the drug works and how it could be improved to more effectively target SARS-CoV-2. He is doing computational studies looking at how the drug interacts with proteins within the cell. The question is which of the many host cell proteins does the drug affect.

“It can be like trying to find a needle in a haystack,” says Dr. Darvesh. “We want to see which of these proteins is actually the culprit in allowing the virus to gain access to the cells, and once we find that protein we can use the same computational methods to see if we can make a better drug than 6-TG.”

“I am very optimistic about this drug.”

The researchers stress that they are not encouraging people to take 6-TG and there is no evidence to date that people taking it for other reasons experience any benefit in treating COVID-19. The discovery is an important first step in a long process that could take years before it produces a treatment for future coronavirus outbreaks.

“Antivirals have a real role to play in future viruses,” says Dr. McCormick. “What I’m excited about is that we’re shining a light on a new area that could be a new branch of this kind of research, where we provide evidence that this group of human proteins are good targets and play important roles in viral replication.”

The research is published in PLOS Pathogens.