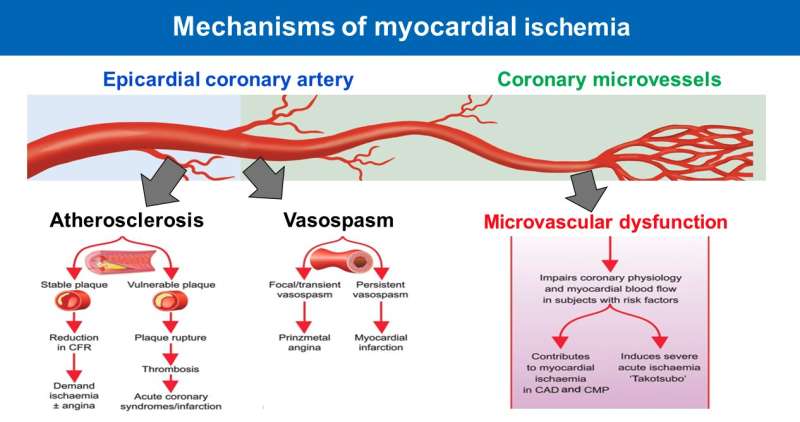 For the first time, a prospective, international study has shown that chest pain caused by problems with the very small vessels supplying blood to the heart is an important health problem that increases the risk of heart attacks, stroke and cardiovascular-related death.

The study, which is published today (Thursday) in the European Heart Journal, recruited 686 patients from 14 institutions in seven countries on four continents between July 2015 and December 2018 to investigate microvascular angina (MVA). Until now, MVA was widely thought to be a benign disease that mainly occurs in women. However, imodium loperamide the study showed that during one to two years of follow-up until December 2019, events such as stroke, heart attack and hospitalization for chest pain (angina) occurred in nearly 8% of patients each year. Men and women were almost equally affected and the prognosis was no different according to sex or ethnicity.

Until relatively recently, little was known about MVA and it can be difficult to diagnose, partly because diagnostic criteria were proposed only in 2018 by the COronary VAsomotor Disorders International Study (COVADIS) Group. Patients with MVA can experience chest pains similar to those of a heart attack and/or shortness of breath, which can lead to them being admitted to hospital. However, standard tests, such as electrocardiograms (ECGs), angiograms and echocardiography, do not detect significant problems with heart rhythm or the main coronary arteries, meaning that MVA is often not diagnosed.

First author of the study and member of the COVADIS Group, Professor Hiroaki Shimokawa, said: “Microvascular angina is an under-researched area, partly because no definite universal definition was available before the COVADIS definition and partly because cardiologists are mainly interested in the large coronary arteries but not the smaller vessels that are also part of the coronary circulation. The former are easily visible by coronary angiography, whereas the latter are not.

Prof. Shimokawa, who is vice dean of the Graduate School at the International University of Health and Welfare (Narita, Japan) and Emeritus/Visiting Professor at the Graduate School of Medicine, Tohoku University (Sendai, Japan), and colleagues applied the COVADIS diagnostic criteria in the current study: (1) signs and symptoms suggesting reduced blood flow to the heart (myocardial ischaemia); (2) no evidence of the main coronary arteries being blocked; (3) objective evidence of myocardial ischaemia provided by non-invasive stress testing of the heart using ECGs or non-invasive imaging such as cardiac magnetic resonance; and (4) evidence of impaired coronary microvascular function showing, for instance, inability of the coronary arteries to increase blood flow under stress, heart microvascular spasms, indications of abnormal resistance to blood flow in the heart’s tiny blood vessels, or delayed flow in the arteries of the contrast agent used for angiograms, indicating increased resistance to blood flow in more distant vessels (known as “coronary slow flow”) but with no evidence of disease in the main coronary arteries. 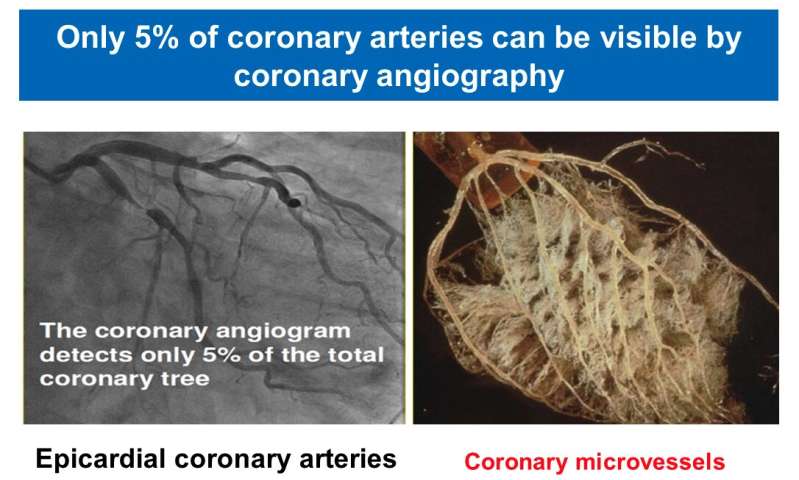 During the follow-up period, there were 78 cases of death or hospitalization due to major cardiovascular problems such as heart attack and stroke, heart failure or unstable angina (6.4% in men and 8.6% in women), an annual incidence of 7.7% among all the patients in the study. Hospitalization for unstable angina was the commonest event.

Analysis showed that high blood pressure, previous history of coronary artery disease and stable angina were all important and independent predictors of these major cardiovascular events. Although caucasians had a higher risk than Asians (annual incidences of 9.3% versus 4.5%), there was no significant difference between the two ethnic groups after adjustments were made for factors that could affect the results, such as age, sex, high blood pressure, diabetes, smoking etc. Women had significantly worse quality of life than men, although they had a similar long-term prognosis; the researchers say this could be due to the effect of female hormones on pain perception.

Prof. Shimokawa said, “Angina is usually thought to be caused mainly by narrowing of the large coronary arteries. However, even after treatment of these arteries with stents or bypass surgery, approximately 40% of patients will still experience chest pains, suggesting problems with microvascular dysfunction are very common. In addition, it has been recently and convincingly demonstrated that the treatment of the large coronary arteries with stent or bypass surgery alone does not significantly improve the long-term prognosis of patients with coronary artery disease, again suggesting the prognostic importance of coronary microvascular dysfunction.

The researchers say that the management and treatment of MVA represents a major unmet need and more research is needed. Patients are usually treated with drugs to prevent blood clotting, such as statins, angiotensin-converting enzyme (ACE) inhibitors or angiotensin receptor blockers (ARBs), or drugs to dilate blood vessels such as beta-blockers, calcium channel blockers and nitrates.

Editor-in-chief of the European Heart Journal, Filippo Crea, professor of cardiology and director of the Department of Cardiovascular and Pneumological Sciences at the Catholic University of the Sacred Heart (Rome, Italy), is a co-author of the study. He said: “It can be estimated that in most European countries, 20,000 to 40,000 people per million of the population suffer from angina. Thus, the total number of angina patients is about 21 million in Europe. As several studies have shown that about 50% of angina patients do not have coronary narrowing, this means that about 10 million people in Europe have angina caused by functional alterations in either the large or small coronary arteries or both. The situation is similar in Asia and U.S. This huge number of patients deserves to be carefully identified and treated. In addition, these data should stimulate the development of drugs that specifically target coronary microcirculation. Last but not least, these functional alterations are frequent not only in angina patients, but also in those who present with myocardial infarction.”