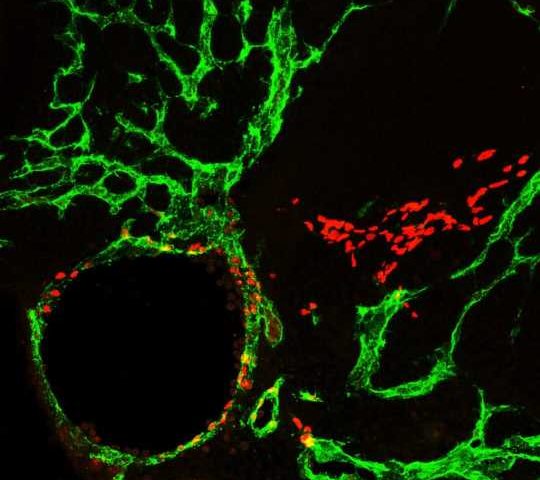 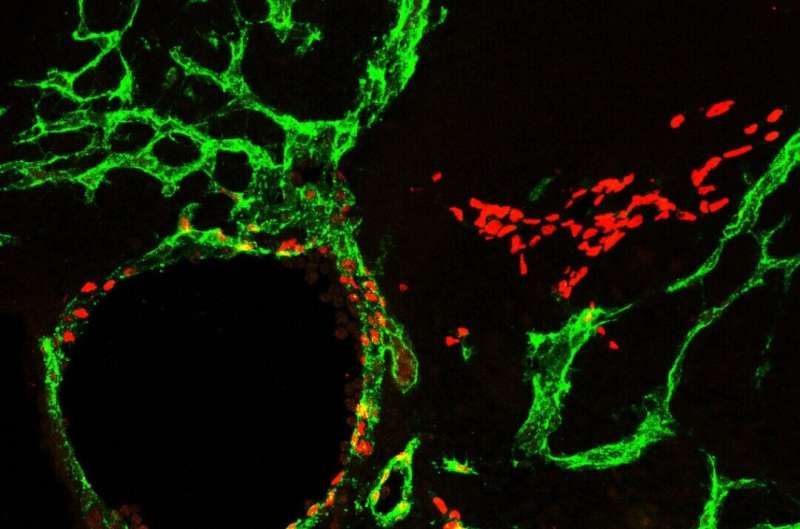 Mitochondria play a key role in the formation of the lymphatic vasculature, according to a study published in Science Advances.

The organelle controls a key autoregulatory feedback loop operating during lymphatic endothelial cell (LEC) fate specification, sensing LECs’ metabolic needs and local tissue environment. This mechanism may be present in other organ systems as well, according to Guillermo Oliver, Ph.D., the Thomas D. Spies Professor of Lymphatic Metabolism and senior author of the study.

“For the first time, we’ve defined that mitochondria activities are also required for cell fate—a concept that a few years ago was unthinkable,” said Oliver, who is also a professor of Medicine in the Division of Nephrology and Hypertension and director of the Center for Vascular and Developmental Biology at the Feinberg Cardiovascular and Renal Research Institute. “We believe this is probably a more common functional role—cell specification and migration happens in a variety of cell types and tissues.”

These progenitor cells then steadily leave the vein and spread along the entire length of the embryo, forming a lymphatic network that will cover most organs and tissues in the adult. However, the generation of progenitor cells, as well as their migration from the vein, must be tightly controlled, according to Oliver.

“If you have too many of these cells leaving the vein, the integrity of the vein will eventually be compromised as these cells make up the walls of the vein,” Oliver said. “So this must be carefully regulated.”

Previous work from the Oliver laboratory showed that this regulation is accomplished through a regulatory loop between Prox1 and vascular growth factor receptor 3 (VEGFR3). Prox1 and VEGFR3 bind to one another and as long as this loop is active, lymphatic progenitor cells leave the vein and eventually become fully-fledged lymphatic cells. However, the duration of this feedback loop and the mechanism by which it is downregulated was unknown, according to Oliver.

Navdeep Chandel, Ph.D., the David W. Cugell, MD, Professor of Medicine in the Division of Pulmonary and Critical Care, a professor of Biochemistry and Molecular Genetics and co-author of the study, previously discovered that deletion of mitochondrial complex III in blood endothelial cells of young mice affected the endothelial cells’ proliferation and migration.

“I was surprised by those results from Navdeep’s lab because I believed that without mitochondrial respiration those cells would die,” Oliver said.

Oliver, along with Wanshu Ma, Ph.D., a postdoctoral fellow in the Oliver laboratory and lead author of the study, removed mitochondrial complex III—a structure essential for cellular respiration —from lymphatic endothelial cells in mouse embryos.

Surprisingly, the investigators found that without mitochondria complex III, the number of lymphatic progenitor cells was greatly reduced, and those that did leave the vein quickly lost their lymphatic cell fate by reverting back to their original blood vasculature phenotype. This was caused by downregulation of VEGFR3, which in turn downregulates Prox1, a master regulator constantly required to maintain lymphatic cell fate, according to Ma.

“These cells are losing the very features that make them lymphatics,” Ma said.

Using several experimental approaches, the scientists also discovered that without mitochondrial complex III and cellular respiration, certain metabolic byproducts were missing from the cells, which acted as a signal that enough lymphatic endothelial progenitor cells have left the vein and the Prox1-VEGFR3 feedback loop can shut down.

“This is probably a general sensor of the metabolic status of the cell, somehow capable of sensing the microenvironment and detecting what the cells need to do,” Oliver said.

While this study only examined lymphatic endothelial cell development, Oliver said he believes that mitochondria are likely vital for this process elsewhere, and Chandel has shown that similar signaling is crucial for stem cell development and in tumor formation.