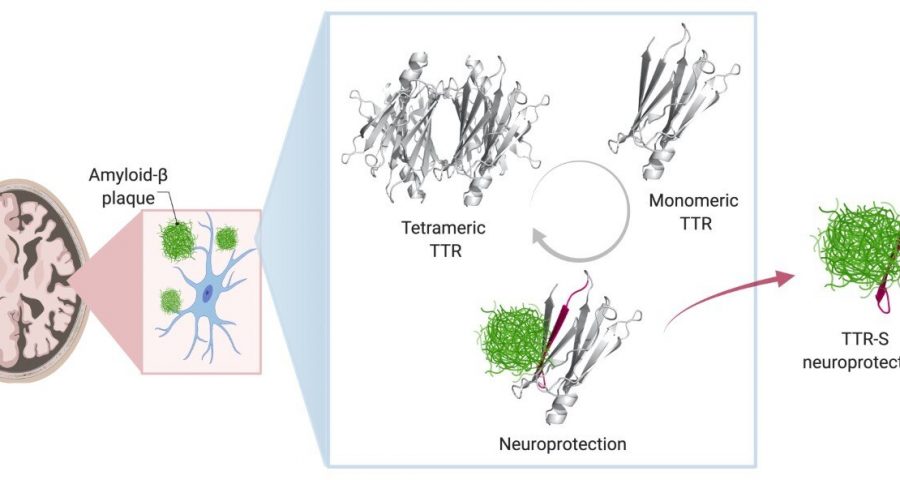 A protein that wreaks havoc in the nerves and heart when it clumps together can prevent the formation of toxic protein clumps associated with Alzheimer’s disease, a new study led by a UT Southwestern researcher shows. The findings, published recently in the Journal of Biological Chemistry, online differin could lead to new treatments for this brain-ravaging condition, which currently has no truly effective therapies and no cure.

Researchers have long known that sticky plaques of a protein known as amyloid beta are a hallmark of Alzheimer’s and are toxic to brain cells. As early as the mid-1990s, other proteins were discovered in these plaques as well.

One of these, a protein known as transthyretin (TTR), seemed to play a protective role, explains Lorena Saelices, Ph.D., assistant professor of biophysics and in the Center for Alzheimer’s and Neurodegenerative Diseases at UTSW, a center that is part of the Peter O’Donnell Jr. Brain Institute. When mice modeled to have Alzheimer’s disease were genetically altered to make more TTR, they were slower to develop an Alzheimer’s-like condition; similarly, when they made less TTR, they developed the condition faster.

In healthy people and animals, Saelices adds, TTR helps transport thyroid hormone and the vitamin A derivative retinol to where they’re needed in the body. For this job, TTR forms a tetramer—a shape akin to a clover with four identical leaflets. However, when it separates into molecules called monomers, these individual pieces can act like amyloid beta, forming sticky fibrils that join together into toxic clumps in the heart and nerves to cause the rare disease amyloidosis. In this condition, amyloid protein builds up in organs and interferes with their function.

Saelices wondered whether there might be a connection between TTR’s separate roles in both preventing and causing amyloid-related diseases. “It seemed like such a coincidence that TTR had such opposing functions,” she says. “How could it be both protective and damaging?”

To explore this question, she and her colleagues developed nine different TTR variants with differing propensities to separate into monomers that aggregate, forming sticky fibrils. Some did this quickly, over the course of hours, while others were slow. Still others were extremely stable and didn’t dissociate into monomers at all.

Saelices and her colleagues suspected that part of TTR was binding to amyloid beta, preventing amyloid beta from forming its own aggregations. However, that important piece of TTR seemed to be hidden when this protein was in its tetramer form. Sure enough, computational studies showed a piece of this protein that was concealed when the leaflets were conjoined could stick to amyloid beta.

However, this piece tended to stick to itself to quickly form clumps. After modifying this piece with chemical tags to halt self-association, the researchers created peptides that could prevent the formation of toxic amyloid beta clumps in solution and even break apart preformed amyloid beta plaques. The interaction of modified TTR peptides with amyloid beta resulted in the conversion to forms called amorphous aggregates that were easily broken up by enzymes. In addition, the modified peptides prevented amyloid ‘seeding,’ a process in which fibrils of amyloid beta extracted from Alzheimer’s disease patients can template the formation of new fibrils.

Saelices and her colleagues are currently testing whether this modified TTR peptide can prevent or slow progression of Alzheimer’s in mouse models. If they’re successful, she says, this protein snippet could form the basis of a new treatment for this recalcitrant condition.