ORLANDO, Fla. — Tommy Zegan was appalled by the few sculptures of Donald J. Trump in existence — the life-size nude statue that popped up in major cities in America, the golden toilet in London. So in 2018, he got to work.

Mr. Zegan, a Trump supporter who had recently moved to Mexico from the United States, created a six-foot-tall fiberglass mold of the former president and painted it gold. Mr. Zegan’s Trump carried a magic wand in his left hand, a reference to Barack Obama’s quip in 2016 about Mr. Trump’s needing one to bring back manufacturing jobs. The sculpted Trump wore his customary suit jacket and red tie, American flag shorts — and flip-flops — “because technically he should be retired,” Mr. Zegan explained, “but he chose to be a servant.”

The final product, titled “Trump and His Magic Wand,” was among the more popular attractions at this year’s Conservative Political Action Conference in Orlando, Fla. On Saturday, attendees flocked to the event’s merchandise hall for photos with the golden sculpture, the scene an almost literal rendering of the Republican Party, which continues to reserve its reverence not for ideas or elected officials but for one man.

“It’s definitely not an idol,” Mr. Zegan insisted. (“I was a youth pastor for 18 years,” he noted.) “An idol is something somebody worships and bows down to. This is a sculpture. It’s two different things.”

The defiantly pro-Trump mood at CPAC represented a culmination of a cycle that began in 2016, when Republican leaders publicly supported Mr. Trump’s nomination for president while privately presuming a landslide defeat and subsequent irrelevance. It was a pattern that held firm over the four years that followed, with many lawmakers continuing to indulge the president, all while confident that a breaking point — whether a loss in 2020 or, most recently, the riot at the Capitol by Trump supporters on Jan. 6 — was imminent.

Meanwhile, their constituents’ devotion to Mr. Trump only hardened. For many voters, Mr. Trump became the party. And at CPAC, many of the thousands of attendees sporting Make America Great Again hats made it clear that their loyalties no longer lay with the institution itself.

Despite four years of professions of fealty to Mr. Trump from the party’s elected officials and their orienting of the G.O.P. around his image, dozens of conservatives this weekend bristled at the Republican label, castigated the party’s current congressional leadership and vowed to leave the party altogether should Mr. Trump decide not to run for a second term in 2024. 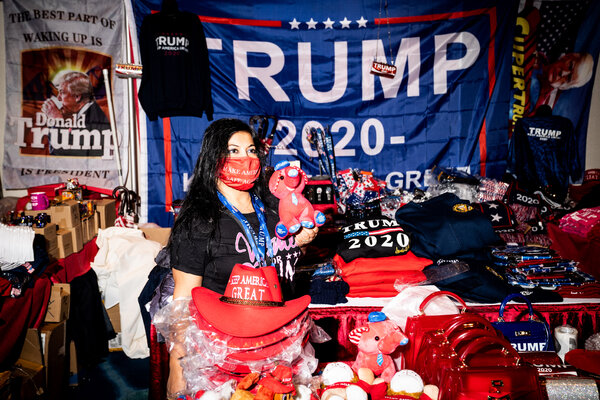 The party’s viability in the future, these people suggested — some as they proudly displayed their well-worn Trump 2020 T-shirts — was entirely contingent upon its members’ willingness to remain fixed in the past.

“We’re so disgusted by Republicans that, honestly, if Trump’s not running, we don’t care who wins,” Sany Dash said as she worked at her Trump merchandise booth.

Yet Ms. Dash, an Indian-American from New York who called herself a “Day 1” Trump supporter, appeared angrier at the moment at Republicans, and specifically at Representative Liz Cheney of Wyoming, who has urged her party to break with the former president. Ms. Dash said she was preparing to open a store in Wyoming in the next two months and call it Bye Bye Liz.

“Liz Cheney is a descendant of a warmonger,” she said. “Sorry, we got into war with Iraq, and so many people died — millions of people’s lives changed.”

She continued: “I don’t care what she has to say now. It’s like the Bush girls in Austin. I don’t care how woke you are in Austin, just because now you get along with Michelle Obama, but your father killed a lot of people. So excuse me, I don’t want anything to do with you people.”

Like all of the dozens of CPAC attendees interviewed, Ms. Dash said she hoped Mr. Trump would run for president in 2024. There are some other Republicans she likes, including Gov. Kristi Noem of South Dakota — “I like Kristi Noem, because she fights back,” she said, calling her a “female Trump” — but she said she would stick with the G.O.P. only if Mr. Trump, or someone who pledges to lead as he did, was the nominee.

“I mean, I’ve heard the rest of them — if they actually come through, that’s wonderful,” she said. “If they don’t, I’m going to be out of this party, just like everyone else. It’s that simple.”

Della Striker, 70, is a lifelong Republican and, for the past three years, has been a fitness instructor at Mar-a-Lago, Mr. Trump’s resort in Palm Beach, Fla. But she said her allegiance to Mr. Trump had come to transcend political parties. “I only voted Republican, but I never loved anyone — I voted Republican because they were at least pro-life and loved Israel.”